This is a question to satisfy my own curiousity as much as anything. As a kiwi i was aware from an early age that the NZ built single seat specials were very basic compared to what we read about in the British journals. When more seniors were asked why it was so, the answer given was "we can't get the bits"

One major missing piece here was a diff that was suitable for chassis mounting - for a De Dion or Independent rear. Yet, apparently in the UK Salisbury supplied a suitable diff to anyone who wanted it. See HWM, Alta et al.

I can find no mass production car using this diff before Jaguar in 60 -61, Did these come direct from Salisbury or were they from something else ?

It's a given that the people using them had very little money backing them. The amount of recycled production parts is well known - Alford and Alder front suspension as an example. Making diffs in small numbers to order would have been quite expensive surely.

I think the simple answer is that the final drive unit is the same whether fitted in a live rear axle or a chassis-mounted unit. In the 1950s we had final drives made by ENV and Salisbury as well as those made by (or at least sold by) such manufacturers as BMC and Rootes and makers of limited production cars could use a mass-produced final drive in a housing made to their spec. AC was using ENV parts in its 2 litre saloon axle and carried that forward for the Ace and Aceca.

In the late 1960s I had such a housing which took the BMC "A" series final drive (as in Morris Minor/Riley 1.5) which I think was from a Lotus Elite but came via John Tojeiro.

Making the gears would be the most expensive bit...

Then the complex machining of the casting used to house them would follow. But when you look at a Salisbury live rear axle (Austin Princess R, for instance) you see that the centre of the axle is a casting which could be fairly readily modified to suit an independent rear end.

Borg-Warner did this in Australia, though the business was sold off some time when I wasn't looking to Dana, with the original maker, BTR, still a part of the deal and... well, it's too complex. They made live axles with a range of different size final drive gears in that same style as Salisbury, then in later years as car makers went to independent rear ends they changed the external details on the castings to suit. Dana's own rear axles follow the same style.

So if you've got the factory nearby and want a few made, it was plausible to get that done. New Zealand was a long way from the factories so they missed out.

All the same, a lot of Australian Specials had live axle centres modified to enable fitment in independent rear ends. And the Ford centre which was used in fairly similar from from 1928 to 1947 was quite adaptable. With the spin-off of the Halibrand quick change set-up also available. The Wylie Javelin used a Ford final drive with independent suspension.

There were also Skoda diffs, which found their way into a few Specials here.

Over the decades they made quite a few variations on their Salisbury diffs from little ones for Corrollas and Escorts, to one bigger for Sigmas and Datsuns. Then in the last several decades the 7.5" one for many makes and models then too the 7.8 which is a far stronger piece. I use one of those in my racecar which is around 440hp and have not broke one yet. The 75,,, first time out I screwed nearly off 2 axles everyday. The better material and bigger size so far have not hurt any yet.

The Fords and Holdens used a bigger version again in the late 90s through too the end in 2015.

As Ray said many diffs were modified for IRS applications. Ford V8s and Halibrands were easy. But even a banjo Holden diff has been converted in the 60s to IRS. And a Zephyr diff [what did they do for axles?]

Harrop Engineering made a housing for Ford 9" components in Sierras. Initially for DJR.[aka the Dicky Diff]

I personally am not a great fan of IRS passenger cars. They eat tyres. Commodores you hold a party if you get 20k out of rear tyres, and that is usually to the air!!!

Live axles are simpler, easier on tyres and still have good manners.

IRS for a sports car or race car ofcourse is an advantage,, though not to the point many make them out to be.

No definitive answer really. Thanks for the responses.

Local to me - Christchurch, a hotbed of special building - only one live axle diff was converted in period. And that had a pair of sprockets put on carriers rather than universal joints. The Green/Brewer combo was capable of designing and making their own gearboxes - but never converted a diff.

Yes, i'm aware of the use of the Skoda diff - but it didn't become available here till the mid/late 50's.

My impression - looking at pics - is that Salisbury used a different casting for the independent diff. A live axle diff seems to have external reinforcing ribs where the independent one doesn't.  It's also visibly got more meat around the side bearing areas in some pics.

I suspect we need an owner of an early Lister or HWM or similar to put up a pic of his diff - or someone with a better picture archive than me.

The ability to manufacture bevel gears in Aus/NZ would have been present thanks to marine and mining engineering companies. In theory, at least, it would have been possible to build a custom diff assembly locally.

I'm presuming that caution -- the economics of low volume production or doubts about design ability -- put people off. Given the have-a-go spirit of special builders, I'm surprised.

Yes, the gear-cutting facilities were available in Australia...

Hypoid final drives were made for Holden by an outside supplier right from the beginning in 1948. Geoff Smedley cut a new crownwheel and pinion set for John Youl's Cooper-Knight transaxle in his family's factory, Bedford Machine Tools in Launceston, to enable him to get longer life from these components.

I am somewhat surprised at anyone once upon a time having any difficulties getting about any dif ratio they might want,  I refer to my time starting in the late 19 fifties and all of the sixties as a point of reference,

In latter part of the fifties I bought the 1955 Lotus Nine that Chapman raced at LeMans and for the rest of the season raced as a factory entry for various drivers in about every major circuit in the UK.  While having a Nine body shape it for most intents was the prototype Eleven.  Chapman sold the car to Doc Wylie in the US who raced quite succesfu/lly with the car through 1956 and 1957 which were years that he bought each year's LeMans cars from Colin which made the Nine redundant to his needs.  It moved on to my ownership for several years of good racing including an Oran Park under 2L lap record and successes at such as Warwick Farm.

I brought the car to my second trip to Australia which was after I had already made a very tight relationship with Nota Engineering where I learned how easy it was to find the ratios that I had in hand.  It was a simple thing to go to the nearby junk yard and ask for gears/setups from a range of Morris vehicles that Nota had experience with knowing what ratio went with which sedan/truck model.

While I inherited a mag housing for the Morris pumpkins etc anyone could easily fabricate a housing or make up a set of dies to have one cast almost anywhere in those days.

for the next day's racing.  On completion of the task I went to load it on to the trailer only find out that I had 4 speeds in reverse and only one forward.  Needless to say that in my haste and that I put the pinion on the wrong side of the ring gear.

I later found that later BMC gear sets would put up with most any torque loads of those days with equally available ratios.

Even later Hewland made almost anything available and if you did not want to pay the price you could take a VW dif up to Hewland standards.

Lee's comments from above apply for the really strong stuff where I dropped out of needs.

Which BMC centres were they, Joe?

I'm not at all familiar with B-series.

I always learn something from your posts, Joe...

There was indeed a 3.54:1 A-series unit. I have never seen one, but it was a competition ratio which was presumably made for Le Mans. I knew the 3.90 was a special Sprite ratio but I'd never heard any mention of the 3.54 at all

Then, reading back over your post, I looked again at the question of four reverses and one forward. As the crownwheel cannot be installed on the wrong side of the pinion... 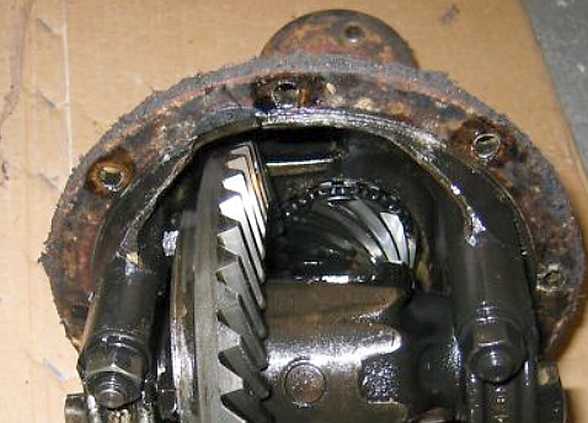 ...but it is certainly possible to instal the 'pumpkin' upside down to achieve this result.