I saw on another forum the sad news that Roger Bell has died .  A very accomplished motoring journalist who I first encountered in Motor , and whose work also appeared in CAR and Supercar Classics in the 80s and 90s. And a very fast racing driver too , especially in the BMW 2002 Tii in which he was a class winner in the Production Saloon Car Championship in 1973 (I  think ?)

Farewell to Roger. He was a good man and a very good friend. And he was a very good driver. He was the Editor who hired me as a Motor magazine road tester in 1976.

I grew up reading (and greatly enjoying) Roger Bell, Philip Turner, Charles Bulmer et al in Motor, so when Roger took to the track I felt I ‘knew’ him, and supported him enthusiastically. I’m very sorry to learn of his death. RIP, Roger, and thank you.

Roger was a gentleman - a good technical journalist - and a very fine driver.  I am very saddened to hear of his passing.  Sincere condolences - yet again in such dark recent months - to another set of relatives and to his many, many friends...

A very nice tribute in the comments by Dan Bevis under this article: https://drives.today...en-de-este.html

Err..... I think they have the wrong picture? My memory of Roger was of someone who looked very different

RB's last appearance in the Guild handbook was in the 2017 edition, as a retired member. Of course, he may not have got around to updating the accompanying pic for several years ... 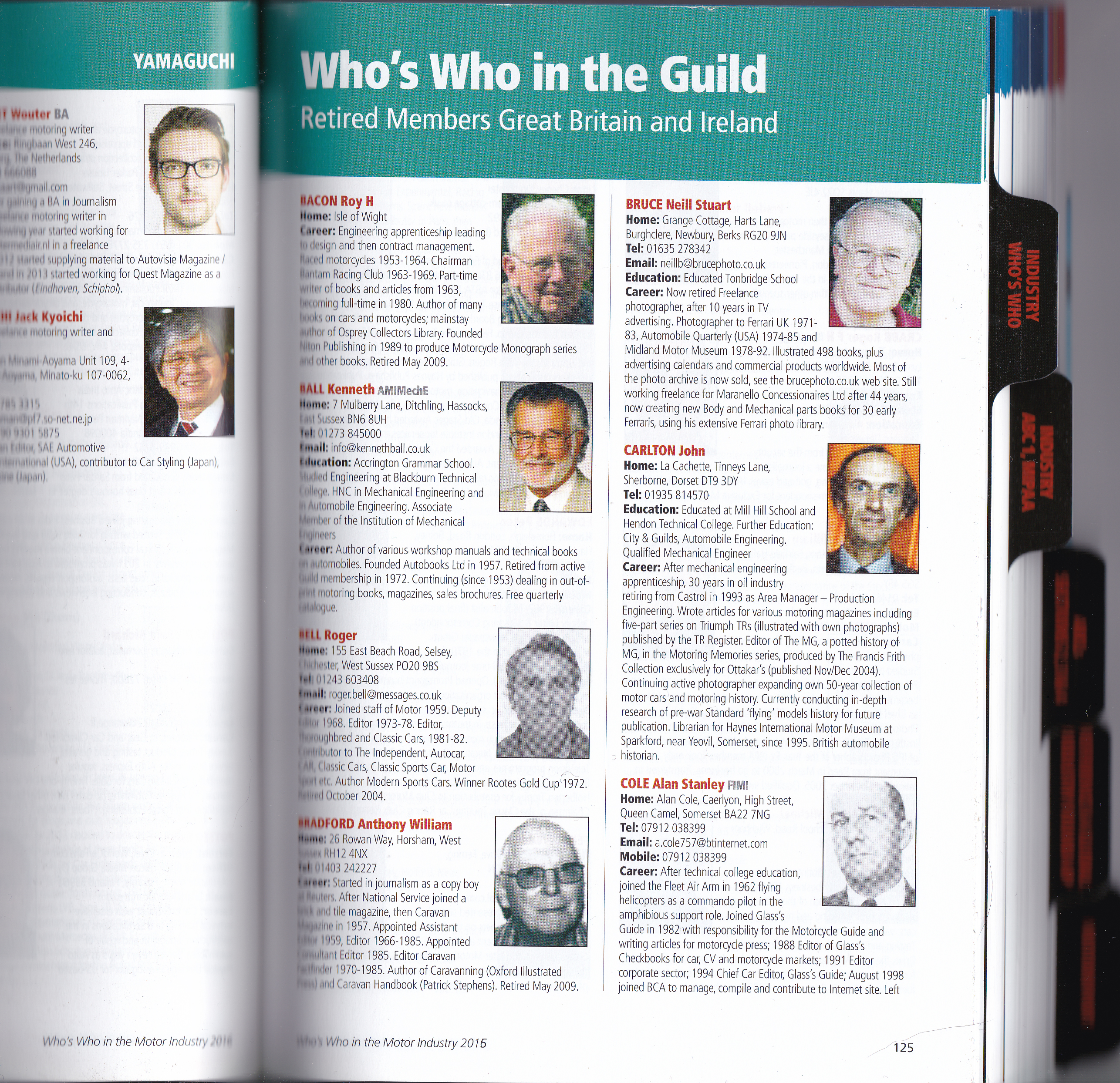 Err..... I think they have the wrong picture? My memory of Roger was of someone who looked very different

Quite so. I have pointed this out and hope it will be corrected. It will be easy to get a photo of Roger from either his son Tim or Jeff Bloxham.

Also, the post from Dan Bevis, whom I have never met, is nice but contains a couple of factual errors. For example, Roger left Motor in 1978, tempted by a higher salary as a motor industry PR (for Vauxhall). But he did not enjoy it and soon went back into journalism. He was an extraordinarily modest man and compliments about his considerable talents embarrassed him.

I think "Dan Bevis" may be a pseudonym of Paul Skilleter...

I think "Dan Bevis" may be a pseudonym of Paul Skilleter...

Correction: I have contacted Paul Skilleter and he is not Dan Bevis. Whoever Dan Bevis is, he seems to have lifted a piece that Paul wrote for Jaguar Enthusiast. To say the least, this is unethical, especially without attribution. Perhaps at least the photo will now be changed.

A yarn about Roger

Henry Fuller, Motor’s Art Editor, was habitually a very calm man who rarely exposed to colleagues any internal turmoil, if indeed there was any. He just did his job quietly and efficiently (and with talent), wondering why all these mad young men with whom he worked were so hooked on motor cars. But his Zen-like temperament had limits and they were stretched beyond his endurance one day by Roger Bell, the Editor who hired me. Roger (1936-2022) was also a calm man, highly talented both as a writer and a driver. Everyone who worked with him, including Henry, liked him and admired him.

If Roger had one major flaw as an Editor, it was that he was a perfectionist and tended to change his mind frequently. One Friday evening, the final deadline of the bulk of the magazine, including the front cover, was looming. For the nth time, Roger wanted a different front page. This was too much for Henry. He picked up all the layouts on his desk, hurled them in the air and stormed out.

Some time later, his mood mellowed by a couple of pints of bitter, Henry returned to the office where he found Roger struggling to sort things out. Roger stood up, apologized profusely, asked Henry to resume his chair and said that he would never behave like that again. Henry remained silent but sat down and completed the task with his customary serenity. No more was said of the incident. It was Roger who told me this story. He said that he had learned from it.

At his leaving party, Henry remarked that all the newspapers and magazines for which he had previously worked, among them The Daily Herald and Picture Post, had ceased publication not long after he had left them. He said that he hoped that this would not be the case with Motor. Alas, the trend continued. Henry outlived Motor by several years. The magazine did not reach its centenary.