One Driver, One Race Competition 2022

For every race, each member will pick one driver and the same driver may not be picked twice before all drivers have been used. The member will get points according to the finishing position of the driver, so win is worth of one point, 2nd place worth of two points etc. After all classified drivers, the list is followed by retired drivers followed by disqualified drivers followed by non-starting drivers.
The initial prediction has to be made before FP1 starts at Bahrain. These shall not be altered unless new driver is entered for any race. That driver can be entered for any event, with original prediction moved to the next race where there is no driver named.
As there are more than 20 races in the schedule, the original predictions include only first 20 races.
After 20 races have been completed, each member can try to improve their scores on drivers for the remainder of the races.
Additionally, each member predicts how many points Pierre Gasly will score during the season. This will act as a tie-breaker. If no prediction is made for this part, it will count as zero points.
Earlier winners:
2019 Makarias
2020 SpaceHorseParty
2021 GTA
Bahrain -
Saudi Arabia -
Australia -
Emilia Romagna -
Miami -
Spain -
Monaco -
Azerbaijan -
Canada -
Britain -
Austria -
France -
Hungary -
Belgium -
Netherlands -
Italy -
Singapore -
Japan -
USA -
Mexico City -
Points scored by Pierre Gasly -
If a race is going to be added in the middle (mainly between Italy and Singapore where Russian GP was planned to be held), Mexico City GP predictions are transferred to that race.

After my poor performance in this game last year, I decided that this year I will choose drivers completely at random (using random number generator):

mark f1 had Schumacher twice and no Zhou, so I considered Schumacher for Miami and Zhou for Hungary.
tourister46a had Norris twice and no Latifi, so I considered Norris for Miami and Latifi for Britain.
In both cases the twice mentioned driver got considered for the race held first and missing one for the race held second.
Standings:
tourister46a 6
Kev00 17
DutchQuicksilver 19
SpaceHorseParty 24
KWSN - DSM 24
alekracing 25
Makarias 28
Brawn BGP 001 31
scheivlak 32
Anderis 34
mark f1 38
f1paul 44
sladealonso 48
GTA 49
F1Frog 50
tourister46a has a great start having used Leclerc and Verstappen in the races they won. Shout-out to Kev00 too who has got great results from Magnussen and Albon and has more so called big guys remaining.
Lots of strugglers especially with Verstappen being a popular pick for Bahrain. 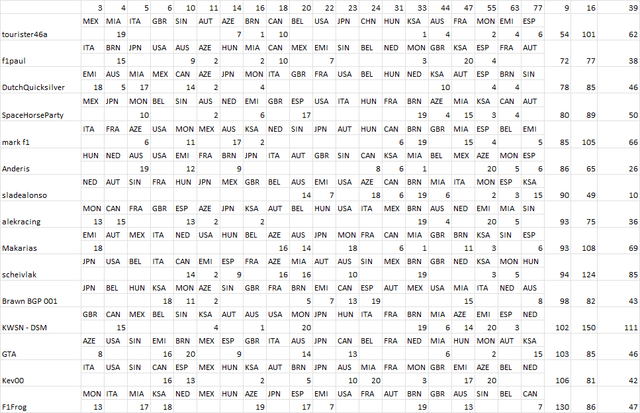 Some notes since recent updates:

Emilia-Romagna: Tsunoda was a popular pick and he did well, big setbacks for KWSN - DSM and alekracing with Sainz.
Miami: Some good and some bad results, barely anything in the middle.
Spain: Home race drivers were popular and quite normal performances from them. No major surprises.
Monaco: No winner selected, picks well distributed with varying results
Azerbaijan: Perez was a popular and good pick. Some badly failed picks with Ferrari drivers.
Canada: Ocon picked by three people with nice 6th to get. Not many picks involving top drivers.

Azerbaijan: Perez was a popular and good pick. Some badly failed picks with Ferrari drivers.

Ah, yes, each year I have to pick one of the top2 team driver for the race he DNFs.