I regret to write that I have just heard from Weaverbird that former driver and entrant Sid Taylor passed away last night - his daughter having just informed her of the sad news.

Condolences to the family and thanks for informing us DCN. Sid Taylor was crucial to many careers.

Very sad news, but unfortunately I am not surprised. One of the unsung heroes of the sport.
I shall let Geoff Lees know. He was one of many who was a beneficiary of Sid's support.

An enthusiast to the core, he'll be missed...

There's also a long list of people who drove for him, co-entered with him and were otherwise involved who've gone before him, so I guess he was a good age.

Very sad news, but unfortunately I am not surprised. One of the unsung heroes of the sport.
I shall let Geoff Lees know. He was one of many who was a beneficiary of Sid's support.

Was it at Theodore Geoff benefited from Sid Taylor's support or was it earlier Richard?

Sincere condolences to all concerned.

Was it at Theodore Geoff benefited from Sid Taylor's support or was it earlier Richard?

Sincere condolences to all concerned.


Directly and specifically, Formula 2 with Ralt.

Denny in Sid's Lola at Thruxton 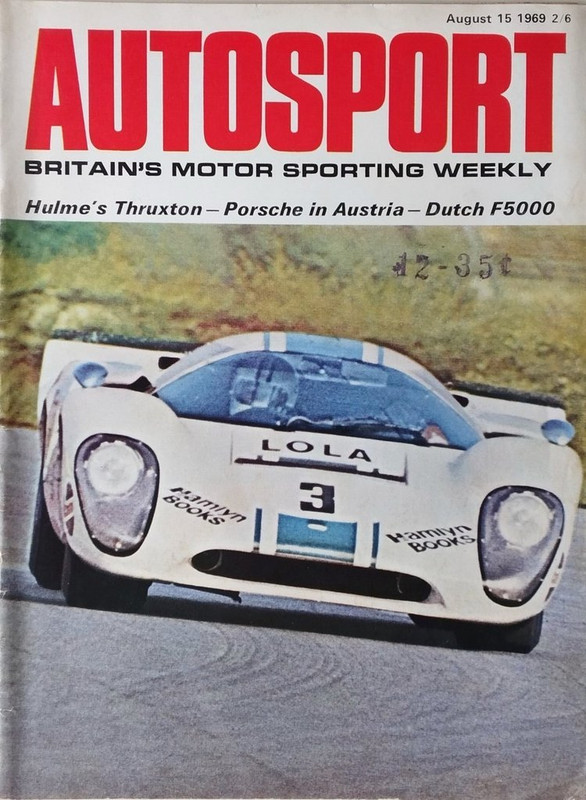 My condolences to the Taylor family and friends

For me, a mention on Sid Taylor always went with Lola. RIP Mr Taylor.

RIP Sid Taylor. Sincere condolences to his family and friends.

From the BRDC today:

We regret to have to report that Life Member Sid Taylor died last Friday, 15 April from the effects of COVID19 and pneumonia. He was 89 years of age and had been a BRDC Member since 1966.

Born and brought up in a farming family in the village of Rathfarnham, south of Dublin, where he was to run Taylor’s Grange Hotel, Sid moved to the West Midlands and established a successful plant hire business which enabled him to indulge his passion for speed on wheels. His first interests had involved motor cycles until a serious accident caused him some nasty injuries and left him with a permanent limp. Sid made the move to racing on four wheels with his road car, an Austin-Healey 3000, in 1961 before acquiring a Lotus Elite. In 1962 on home ground with the Elite Sid came second to South African Bob Olthoff’s Austin-Healey 3000 (the famous DD300) in the Leinster Trophy on the Dunboyne road circuit. The race was run on a handicap basis over a distance of 100 miles and admitted both single-seaters and sports cars. The following year, Sid went one better and won the Leinster Trophy against opposition which included John Pringle’s 2.5 litre Formula 1 Cooper-Climax T51.

The Elite gave way to a Jaguar E-type in 1964 which in turn was replaced by one of the new Lotus Elans which brought Sid a couple of third places at Crystal Palace. At this point Sid made the conscious decision to progress from amateur racing for fun at weekends to a competitor to be taken seriously on the national stage. He acquired from Team Elite the Brabham-Climax BT8 sports-racing car which had been driven by Bob Anderson and Denny Hulme, the future 1967 Formula 1 World Champion in particular enjoying considerable success with the car. Part of the deal involved Team Elite’s ace mechanic, Ron Bennett, continuing to look after the Brabham. An incidental ‘bonus’ was that the car was delivered in the Team Elite white livery with one wide and two narrow green stripes along its bodywork. Sid saw no reason to change the colour scheme which over the ensuing years has come to be regarded as synonymous with Sidney Taylor Racing.

In 1965 Denny won the RAC Tourist Trophy and other sports car races at Mallory Park and Crystal Palace with the immaculately prepared Brabham BT8 while Sid himself used the car extensively at circuits around the United Kingdom, winning six races and finishing second or third on five other occasions. The Taylor/Hulme/Bennet triumvirate proved so successful that the decision was taken to acquire one of the new Lola T70s for 1966. The successes continued as Denny won the first four major British races in succession including the RAC Tourist Trophy for the second time. Not surprisingly Sidney Taylor Racing and Denny won the British Sports Car Championship. Highlight of the year for Sid as a driver was winning at Phoenix Park near Dublin, setting a new lap record at 107.95 mph for the challenging parkland circuit.

By 1967 Sid’s team had become one of the best in the business with the ability to attract drivers of the highest calibre. In addition to Denny Hulme, others who raced and won for the team included Brian Redman, Peter Gethin, Frank Gardner, Reine Wisell, Derek Bell and Brett Lunger. Most successful of all was Brian Redman with 13 victories to his credit across both sports cars and Formula 5000 single seaters into which Sid Taylor Racing branched out with Peter Gethin in 1970, Peter winning eight races on his way to taking his second successive European Formula 5000 title in a McLaren-Chevrolet M10B. Peter  also finished as runner up in the 1971 Interserie with a McLaren-Chevrolet M8E while Brian was second in the 1972 European Formula 5000 Series and third in US equivalent.

Another of the leading drivers who raced regularly for the team was Vern Schuppan through whom Sid came to meet Teddy Yip. The consequence was that Sid merged his racing team into Teddy Yip’s Theodore Racing. Over the next decade Sid ran the team which continued to be able to attract some of the best drivers with funds provided by Teddy Yip’s profitable businesses in the leisure and related industries in Macau and elsewhere. Formula 1, Formula 2, British F1, Tasman, Formula 5000, Formula Atlantic and Formula 3  were all categories in which the team won with drivers who included Keke Rosberg, famously the winner of the 1978 BRDC Daily Express International Trophy in torrential rain at Silverstone in the unfashionable, Ralt-derived Theodore TR2; Desire Wilson who won a British F1 race at Brands Hatch in 1980 and remains to this day the only woman to have won a Formula 1 race; Alan Jones, David Kennedy, Geoff Lees, Roberto Moreno and Bob Evans.

Sid Taylor lived for motor racing. At the peak of his powers, he ran a formidable team which achieved considerable success in most of the leading categories of International and British national racing. Although not in the best of health in recent years, Sid valued his membership of the BRDC and visited the Clubhouse as often as he could accompanied by his wife Mary who had been a considerable racer herself in the 1960s until suffering serious injuries in an accident at Silverstone. To Mary, to their daughter Tracey and to their many friends in the motor racing world, the BRDC offers its most sincere condolences at the loss of a great character. Sid and Mary’s son Sid Junior passed away in 2017.