So I was scrolling through my news stories on the MS Edge homepage at work. The news stories are interspersed with clickbait ads that even if my work network didn’t block I still would never click. But one caught my eye for the picture used. Obviously I wouldn’t give StoryTerrace any clicks, and these ads are procedurally generated so the pictures don’t always make sense. 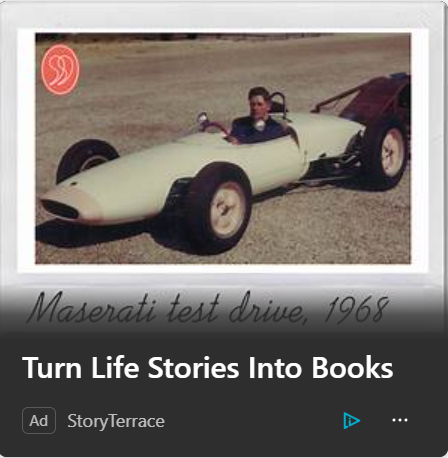 It occurred to me that some one here at TNF would be able to identify the car, driver, and maybe even the location and event.

I’d be very surprised if it was a Maserati test in 1968 for the supposed example user of this online “service”.

Looks like a Lotus 20 Formula Junior to me. It certainly has Lotus wobbly-web wheels. Shape, engine air intakes, roll hoop, mirrors, badge position all fit. I've tried magnifying the pic, but the badge is too blurred to read.

And no, it's not a Maserati, any more than your other unwanted ads feature genuinely respectable young ladies.

Definitely a Lotus 20 - it has that 'ill-fitting' engine cover.

Maybe the driver's name is Maserati and he is having a test drive in the Lotus?

I think the driver in the car looks like Jim Endruweit, long-standing Team Lotus mechanic, and he's just driven it off the trailer.

However, those aren't standard Lotus colours. Maybe Rupertlt1 is right and it's the de Udy car, and if that is Endruweit it implies the works was running it for him, which would be surprising.

I think the driver in the car looks like Jim Endruweit


That was my initial thought too, but I became less sure when I zoomed in a bit.

I didn't think it was the de Udy car. I thought possibly the #27 of Alan Fulwood.

I knew you lot would come through.

Could the driver in the Lotus be Jacques Maglia?

The car in question looks exactly like Alan Fulwood's Lotus 20, his entrant was Jim Russell Racing Driver School. (Was the livery Fulwood's own?)

A common factor is that Jaques Maglia attended Jim Russell's driving school for some lessons in early '63, could it be Maglia sitting in Fulwood's car?

Lots of information on Maglia (+his sponsor Jean Genet!) in this article: http://pilotos-muert...liaJacques.html

Maglia's racing career ended after a bad accident during a Formula 2 race, at the Solitude race track near Stuttgart in July '65.

Of the 19 cars which faced the starter's

flag for the Junior race, no less than 11

were from the Jim Russell school. The two

in the flrst two positions with Fenning

coming past the winner after only one

change-over in their positions. Jacques Mag-

lia's Lotus was a good third, and a struggle

between the Lotuses of Wyllie and Russell

pupil Henry Morrogh was resolved when