Was thinking this might make for a fun discussion: what are the ten best finishes to a race that you've seen in your time watching racing (since 2003 for me)? They don't have to be series specific, and they don't have to be "at the line" moments, either. Some ideas to get you started (these are all in links since some of the videos wouldn't embed):

10. F1: 2021 French Grand Prix
A race-long battle of strategic cat-and-mouse between Lewis Hamilton and 2021 champion Max Verstappen comes to a head on the penultimate lap, after a late-race pit-stop put Verstappen on fresher tyres with the mission of hunting down Hamilton.

9. F1: 2011 Canadian Grand Prix
Nobody–not even Jenson Button–thought they would be chasing down dominant race leader Sebastian Vettel towards the end of a wet-dry Canadian Grand Prix featuring a four-hour red flag delay. When Button–after a half-dozen pit stops and a pair of collisions–found himself behind Vettel on the final lap, a single mistake would mean the end of either's chance of victory...

8. IndyCar: 2019 Indy 200 at Mid-Ohio
Widely-regarded as the king of Mid-Ohio, race leader Scott Dixon elected to complete what had been a comfortable race on the fast-fading softer tyres. Teammate Felix Rosenqvist, vastly quicker on the more-durable hards, found himself challenging an ailing Dixon for the win with a handful of laps left. Keeping slower lapped cars behind would be Dixon's only opportunity to salvage victory–0.093 seconds was the margin at the line.

6. F1: 2005 Japanese Grand Prix
Giancarlo Fisichella had controlled the Japanese Grand Prix from the front, while teammate Fernando Alonso and McLaren rival Kimi Raikkonen started toward the back of the grid due to engine-related penalties. All three drivers occupied podium positions during the final laps. Raikkonen's McLaren MP4-20–so damn fast its only enemy was arguably itself–had helped him close in on Fisichella, but had already failed him on the final lap before earlier in the season...

5. IndyCar: 2013 Sao Paolo 300
AJ Foyt Racing found themselves in excellent form early in the 2013 season, with Takuma Sato capturing victory at Long Beach and looking to go back-to-back with a second win in the Sao Paolo street race. To do this, he would have to hold off both Andretti Autosport's James Hinchcliffe, winner of the season-opener two races prior, and upstart Young American Josef Newgarden, fighting for his first win with one of IndyCar's minnows, Sarah Fisher Hartman Racing. The Top 5 finishers would ultimately be covered by 1.65 seconds.

4. IndyCar: 2014 Indianapolis 500 Mile Race
There have been numerous wild endings to the Greatest Spectacle in Racing, but this one will always be the standout for me. The higher-downforce nature of Dallara's DW-12–in the last year of its original aero kit–meant that the draft at the Speedway was immensely powerful. A late-race yellow set up what would ultimately be the race's final duel, between Helio Castroneves and Ryan Hunter-Reay. The strength of the draft meant it would be more a question of when, rather than where, the final pass of the race was executed. The margin at the finish was 0.060 seconds, the second-closest in Indy 500 history.

3. IMSA: 2016 Rolex 24 at Daytona
It may never get better than this in endurance racing, or sportscar racing in general.

After 23 hours and 30 minutes, Corvette Racing's two cars found themselves in competition only with each other. You would imagine in these circumstances the team would demand a formation finish–as it happens, racing drivers have a different idea of what this means. Unless I'm mistaken, the 0.034 second margin at the line is the closest finish ever recorded in a 24-hour race. If not, it's surely the closest racing finish by percentage of race time at 0.000039%.

2. F1: 2008 Brazilian Grand Prix
I've tried to avoid spoilers for these finishes so far, so that those who haven't seen them will still get something out of them, but here I'm not sure I'd be spoiling it for anyone. The final race of the 2008 F1 World Championship encapsulated the emotional tornado that the season itself had been, with championship fortunes whipsawing seemingly every race. While Lewis Hamilton appeared in control of the championship for much of the day, Felipe Massa was in control of the race, until the skies opened up in the day's final minutes and Hamilton suddenly found himself outside of the positions he needed to secure the championship. The fight for the race win was largely undramatic, but the championship wouldn't be decided until the final corner for one of its protagonists...

1. IndyCar: 2016 Firestone 600 at Texas Motor Speedway
Technically, this was the longest race in IndyCar history, at 76 days. Originally scheduled for June 11, rain postponed the start until the following afternoon, and then halted the race on June 12 after 71 laps. With a substantial portion of the field slated to compete in the 24 Hours of Le Mans the following weekend, the race would have to be postponed deep into the series' schedule–on August 27, two full months later.

On August 27, the race was resumed as if it had been red flagged earlier in the day. James Hinchcliffe led an explosive start into what was an orderly affair for the next 142 of the remaining 177 laps, until a series of incidents bunched the field for the close of the race.

The last yellow would leave the field with 8 laps of the 1.5 mile oval to determine a victor. With drivers banging wheels four-wide at speeds of 220+, inches apart for pretty much all 8 laps, and the top three cars covered by 0.09 seconds at the line (the winning margin was 0.008 seconds), this is surely one of the greatest finishes in racing history. Aero Paint certainly thought so, at least! 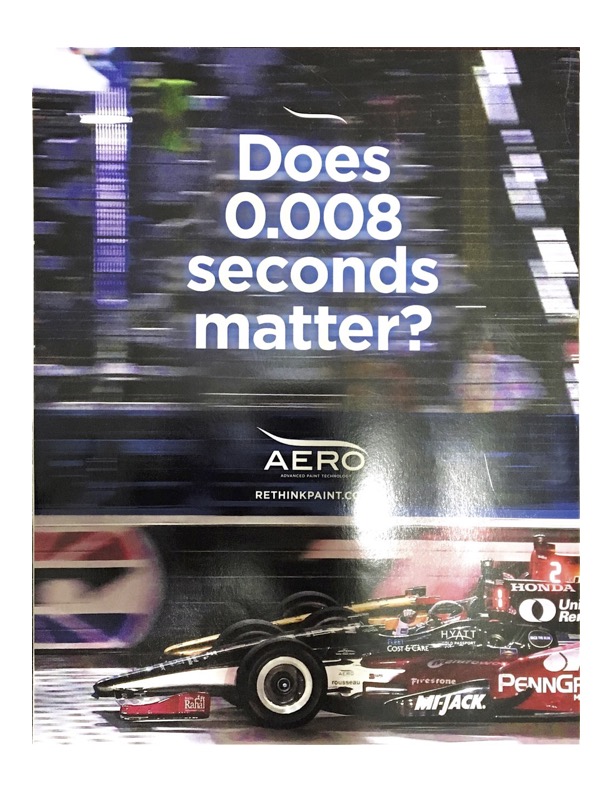 PS: Brazilian GP  (Sao Paulo)  2008 was more one of the worst finishes for me: anti climax. So cruel on Felipe Massa, he was such a gentleman in accepting defeat. If only Glock had driven a bit quicker in that final lap... Worst anti climax was Abu Dhabi 2022: a complete farce.

Abu Dhabi 2021 Grand Prix? I mean it was controversial but I've never felt that entranced by any race before.

Abu Dhabi 2021. As a neutral to Red Bull/Merc, it was an incredible finish.

San Marino 1985 deserves a mention, even though I always feel heartbroken when Johansson suddenly stops on the penultimate lap...

Abu Dhabi 2021. As a neutral to Red Bull/Merc, it was an incredible finish.

With the same neutrality, i found it to be contrived bullsh!t made for TV.

The Fast and the Furious had a more believable ending.

And part of the report: “At the last corner Ascari and Farina were side by side. Ascari spun, Farina went on to the grass to avoid his team mate but Ascari was hit by Marimon who had nowhere to go. Fangio dived through the carnage to win the race. Farina recovered to take second and Villoresi found himself in third place.”

Some others not mentioned yet:

- Bahrain 21: Verstappen hunting down Hamilton but not quite being able to make the pass stick.

- Europe 95: Schumacher hunting down Alesi and passing him with 3 laps to go (a great move around the outside).

- USA 21: Hamilton hunting down Verstappen but not enough to make a pass.

- France 97: Quite a boring race until the last few laps when rain hit the circut. Some drivers stayed out on slicks, others pitted for wets. Schumacher went off into the gravel but retained his lead. Ralf spun, but his brother let him unlap himself. Then on the final lap, Alesi pushed Coulthard off, allowing Ralf to get the final point for 6th place. Villeneuve also attempted to pass Irvine for 3rd at the final corner, with the former spinning and just holding off Alesi to the line in order to get 4th place.

- Belgium 08: Similar to France above. Relatively uneventful race until rain hit. Great battle between Kimi and Lewis, and some excellent drives further down the field.

- Malaysia 12: Perez closing in on Alonso in the final laps but going wide at the penultimate corner, costing him the chance of victory.

And part of the report: “At the last corner Ascari and Farina were side by side. Ascari spun, Farina went on to the grass to avoid his team mate but Ascari was hit by Marimon who had nowhere to go. Fangio dived through the carnage to win the race. Farina recovered to take second and Villoresi found himself in third place.”

Abu Dhabi 2021 Grand Prix? I mean it was controversial but I've never felt that entranced by any race before.

It even has a permanent thread devoted to it, for people who want to bask in the enjoyment.

Can;t remember the exact year but in one of the Freedom 100 (the Indy Lights race that supports the Indy 500) was a big slipstream drag race to the line. The eventual winner was in 4th place coming out of the final corner.

2000 250cc Australian Grand Prix. The final race of the season and the top two in the championship, teammates Oliver Jacque and Shinya Nakano are seperated by just 2 points. The race was a frantic battle between them that culminated in a drag race to the line for the race win and the title.

Yeah I thought of that. Close finish!