In the late 1940's it was decided the AGP should be rotated between the Australian states.

For 1949 it was awarded to Queensland. The only problem was they did not have a circuit suitable for such an event.

Attached is the story of how it came to be at Leyburn and the incredible history behind that. Very worthwhile reading:

The AGP When Any Airfield Would Do – The Race Torque

Interesting that the movie has been converted to digital back to front...

It shows them going around right hand bends, of which there were none at Leyburn.

But an interesting site and contains information I've not heard of before. The newspaper clippings are informative, as are some comments made by the author, and give 'atmosphere' to the story which agrees with things Bill Westerman has told me.

I enjoyed that, a level of detail about the lead up challenges I’ve not seen before, so a valuable piece.

Originally posted by myself
.....and give 'atmosphere' to the story which agrees with things Bill Westerman has told me.

One thing in the story which I had doubts about was the mention of Strathpine not being considered:

.....Simplicity was at the heart of the layout, it was a basic up-and-back affair looping around barrels, while later, a deviation out into the scrub at one end mixed things up, although hardly to the standard required to host a major event.

Additionally, some locals nearby to the ex-landing strip were not keen on their Sunday church services being interrupted by the commotion of competition engines.

A man who was very familiar with Strathpine in that era, and with racing in Queensland as both a spectator and competitor was Jim Bertram. I asked him about this and he assures me that Strathpine would never have been considered for these reasons:

1. Too short, therefore not suitable for a big event and insufficient cars would have been able to run.

2. Too crowded. Regular meetings there saw five or six thousand spectators, maybe seven thousand would fit into the surrounds of the circuit, the organising club needed to plan for a much larger crowd than this.

But there was never any problem with the circuit's proximity to any church. None were close enough (in 1949) to be in earshot. The religious problem with this race was purely at Lowood where the conduct of racing on a Sunday, not the noise, was the objection.

Then there's the comment that the club lacked the 'resources and manpower.' I'm sure that either the AGP book or other people with whom I've discussed this have told me that they even used a 'plane in their search for a circuit.

Small points, but in the pursuit of accuracy I think they're important. Jim, by the way, did attend the Grand Prix. He recalls that he went up on a motorcycle with a friend. As they both had bikes they each had petrol coupons, pooling their coupons gave them enough to get both of them there, but on the one bike.

And Terry, another point...

The decision to rotate the Grand Prix among the states was made in the thirties, commencing with either Bathurst or Lobethal. This resumed after the war, only altered to combine the Albert Park event with the 1956 Olympic Games.

The organisation in charge at the time had made the decision and it stood, being endorsed by the CAMS, until the big International Series events began in 1963.

And Terry, another point...

The decision to rotate the Grand Prix among the states was made in the thirties, commencing with either Bathurst or Lobethal. This resumed after the war, only altered to combine the Albert Park event with the 1956 Olympic Games.

The organisation in charge at the time had made the decision and it stood, being endorsed by the CAMS, until the big International Series events began in 1963.

Ray, the decision to rotate the AGP between states was NOT made in the thirties.

It was actually first introduced at the Annual Conference of the Australian Automobile Association in September 1947.

I have just checked my files and I need to confirm what Ray suggested, that the decision to rotate the AGP between states was made in the thirties, namely April 1939.

The locations for the 1938 and 1939 GPs were made out of necessity after Phillip Island became unsuitable and no venue could be found for 1936. The December 1936 South Australian Grand Prix was retrospectively counted as the "1937 AGP", but then Bathurst became available as a stand alone circuit, and was the only suitable choice for 1938.

In 1939 the Grand Prix was at Lobethal, again simply as an alternative to Bathurst, but NO decision had been made to officially rotate the event at that stage.

But, as a result of the victory by WA driver Alan Tomlinson, Western Australia quickly made application to the Australian Automobile Association to hold the event at Albany in January1940. That application was approved in April 1939, and AT THAT SAME MEETING of the AAA, the following dates were allocated - 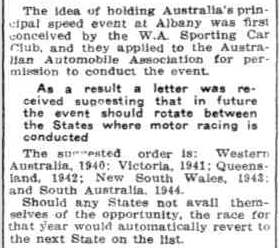 Of course war intervened, and the above allocations had to be scrapped. The issue was discussed at the annual meeting of the AAA in Surfers Paradise on the 30th October 1946 where a new allocation of dates was accepted being  - 1947 - NSW; 1948 - Victoria; 1949 - QLD; 1950 - South Australia etc

It must be noted that by the beginning of 1949, all involved realized that Queensland was having difficulties finding a suitable location for their '49 AGP, so Victoria pushed hard to be allowed to stage the event again, but their efforts were rebuffed, which led to a virtual boycott of Victorian entrants for the Leyburn race.

Immediately after the war Western Australia made application to hold the first post-war grand prix at Caversham in 1947, on the basis that it had already been decided they were to host the next AGP following South Australia in 1939 (namely 1940). 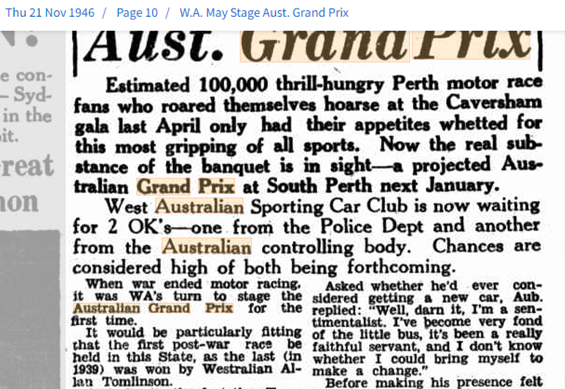 ... but their request was rejected.

It may well be the AAA wanted the most "high profile" venue that would attract the most competitors to help kick-start national motor racing in those difficult post-war years.

Ray, the decision to rotate the AGP between states was NOT made in the thirties.

It was actually first introduced at the Annual Conference of the Australian Automobile Association in September 1947.

The press report on the 1947 AAA meeting

Totally accept what you've shown us there. Allocation of future dates was at that September 1947 meeting of the AAA. You were correct

It looks like the allocation of just the 1947 event was discussed in October 1946. 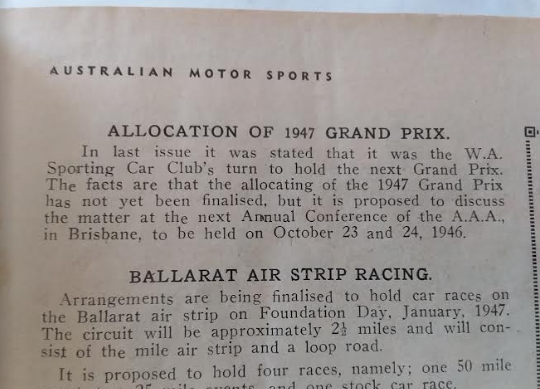 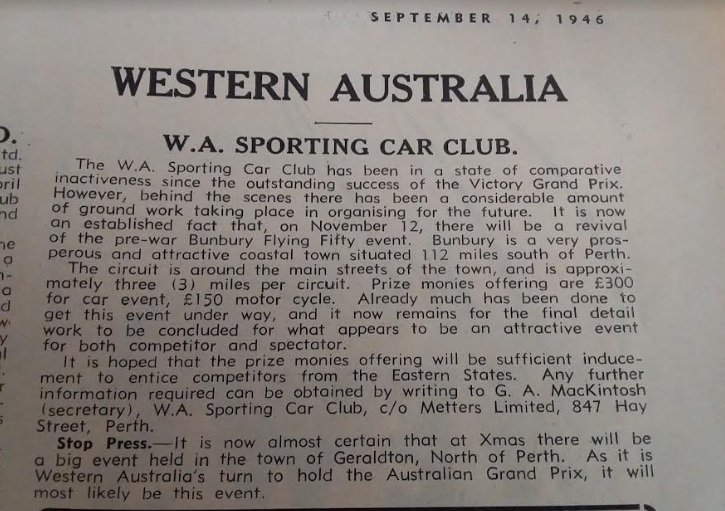 - and by the March issue it had been confirmed that NSW would hold the '47 race but still no post-war allocation of future state by state events. 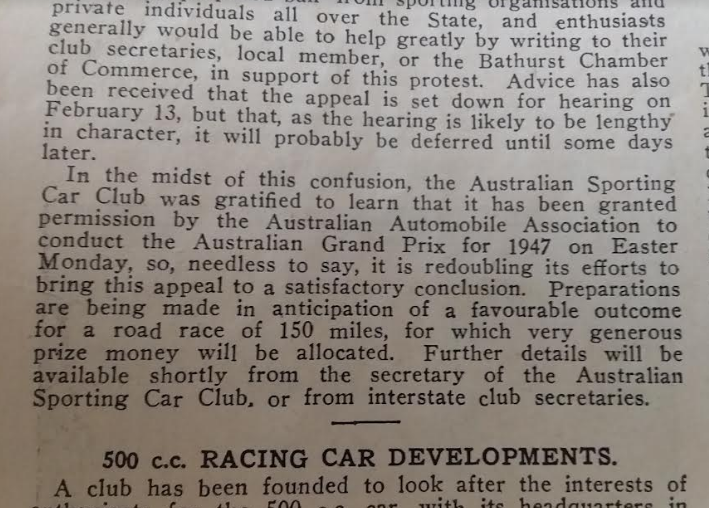 I can only wonder if the AAA quickly got on the phone to John Barraclough and said "you've jumped the gun a bit there old boy!"

I didn't realize it had been initially scheduled for Easter. Obviously, the battle between the race organising club and the police over track safety issues caused the postponement until October.

The half-yearly meeting of the AAA discussed the matter again in March 1947. Perhaps because Ballarat and Victor Harbour were making noises about wanting to host the '47 event and, I image, the track safety concerns.

Irrespective of all of the machinations of the late forties, the AAA were at that time merely putting into practice what had been decided in 1938...

The decision was made in 1939 and the revision of the schedule came after the cessation of hostilities.

Ray, I wonder per chance if you have any proof of your statements compared to the forgoing posts.

When I get home, Terry, I'll quote chapter and verse from the AGP book...

I'm sure it was Graham Howard research. However, I'd have thought that Steve has spelled it all out nicely.

Ray I'm trying to find the period report from the AAA annual meeting held on 26th October 1938 but without success.

I have found reports that roads should all be numbered, when street lights should be turned on and off, and surprise, surprise, efforts must be made to curb road deaths - but all off topic.

I did find this - 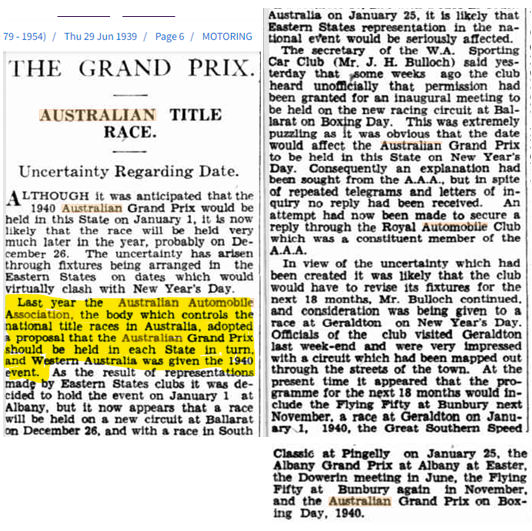 Please note the dates - article is June 1939, therefore the "last year" highlighted must refer to 1938!

However I am still looking

Whilst researching for post #13, I found this interesting article written by Peter Whitehead after his 1938 Australian trip.

It is slightly off topic ... but perhaps not!

The two things that stand out for me in light of the pre-war jousting to host the Australian Grand Prix in 1940, and the issues surrounding the 1949 event, is his recommendation for states to stop their infighting!

... and we ended up with the Confederation of Australian Motor Sport"?

How good has that worked out?