Franēois Cevert / Goldenberg and the 6 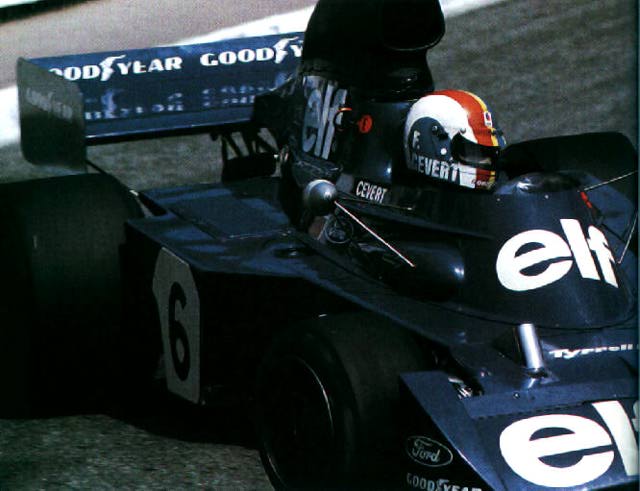 And it was supposed to become Jackie Steward's 100th GP weekend that weekend. Or so it was planned, because it went a bit different than anticipated.

here's an little article about the fortune teller involved;

A Premonition of Death?

There are many tales of superstition in motor racing - the deaths of Dick Seaman, Alberto Ascari and Ayrton Senna have all been linked to coincidences, premonitions and sheer bedevilment on the part of the Motor Racing Gods - but none, perhaps, is as intriguing as the thought that the tragic death of Francois Cevert at Watkins Glen in 1973 had been predicted by a fortune teller many years before.....

Just before his racing career took off in earnest, Francois had a long term girlfriend named Anne Van Malderen. 'Nanou' as she was affectionately known was a bright, pretty girl who Cevert had met at St. Tropez in 1964. She was married, which complicated things a little initially, but the pair soon formed a strong bond which was to last a number of years. The following are her words.....

Some time during 1959 I went with my mother to see a clairvoyante who had been recommended to her.

The woman lived in a very ordinary house in Asnieres, with nothing about either its shape or its decoration to reveal the priviliged link its owner seemed to have with the other world. She neither read the cards nor gazed in her crystal ball. She looked at you for a long time and studied a photograph, if you happened to have brought one, and then shut herself away in an impressive silence. She emerged only to write and to go on writing until her hand became illegible. Then, and only then, did she stop scribbling.

I was 20 at the time, and had only come to keep my mother company. I was completely sceptical in those days about all these revelations of a possible future.

Suddenly the clairvoyante seemed to notice me and fixed me with her eyes. "I must speak to you" she said.

Surprised, I followed her across the room.

"Your marriage will not last", she said - out of the blue ,"You will meet a young man who will make an indelible mark on your life...you will know deep happiness....I can see his blue eyes. I can see the sea...you will meet by the sea."

I had only just been married so these predictions left me thoughtful for some time. Then I forgot all about them. In 1964, I met Francois Cevert by the sea in St. Tropez.

Two years later, when Francois decided to try for the Shell scholarship [motor racing competition with a paid F3 drive as a prize], I felt the need to return to the clairvoyante to see what the future had in store for the pair of us. When I got there I said nothing about Francois. I simply gave her his photograph. She was silent for perhaps an hour. I said nothing. "You have already seen me", she said, and then, "You've mwt him! That's odd, his picture is all mixed up with a strange machine - it has wheels but no body - what can it be?"

"He's going in for some kind of exam," she went on, frowning,"He'll win hands down - I see a brilliant career ahead of him but...." She stopped, looked at me, and then said, "You will be very happy, but you will not manage to hold him, his success will come between you..." Another silence, then she simply added, "I must tell you too....this young man will not live to see his thirtieth birthday."

When, later that evening, I saw Francois it was with forced gaiety. "I've been to a clairvoyante. The Shell scholarship is in your pocket, its written in your stars." This reassured him. He'd been a little anxious as we had only just taken the decisioon to enter him in the Magny-Cours driving school and he was far from certain that he would be ready for the Shell test when it came.

I could not refrain from adding, "She also told me that you would have a brilliant career but that your success would come between us."

"Come between us? She's crazy, your clairvoyante. Anyway, that stuff is all a load of balls! I'll go and see her myself; and I bet you she'll foretell a totally different future!"

He went to see her, sometime later, at the end of September. When he came back, the first thing he asked was: "Did you ring her up?"

"Her predictions were exactly what you told me."

I was suddenly frightened. "It doesn't mean a thing,"I said, "She must have recognised you - I did show her your photo...."

"Did she also tell you that I would not live to be thirty?"

"Francois - its all nonsense! These old women talk through their hats - how can anyone read the future?"

"So she DID tell you that too?" he said.

He looked at me and smiled, "What does it matter? By the then I shall already be World Champion. To disappear at the height of my fame - what a glorious death."

He took me in his arms and kissed me.

Francois Cevert was killed on October 6th 1973 during practice for the United States Grand Prix. It was the last Formula One race in which he was due to drive before his thirtieth birthday.

Some years after Cevert's death, Nanou decided - after discussions with Francois' family - to revisit the clairvoyante, by now an old woman. Again, she took a picture of Francois, but in this picture he was a young child and therefore impossible to recognise.

Again, the clairvoyante looked at the picture and lapsed into a long silence.

okay, this may sound a bit wierd, but the wierdness has just to start...... Because the immensly strange occurense of a LOT of number 6 here, in this particular story and particular moment in time..... really bizar.

.... now.... to much of anything is just BAD... But, FranĆ§ois noticed those all those 6 symbolism that moment, that day, and he was convinced he would get his 1st pole position.
Maybe his conviction made him go over the edge, .........

but you can say what you want, but this stuff wit hall those SIXES, is just to bizar, isn't???????

Shouldn't this be in either the Nostalgia forum or the Paddock Club?

You're an reincardination of him... aren't you ?

This thread is inappropriate