David's link shows Jim Russell in a Lotus 11-Alta and Tony Brooks in a Lotus 9-Lea Francis.  So are we talking about two different cars?

Also, the Motor Sport report doesn't state that Russell was in a Lotus Eleven Connaught. The only type number referred to in any of the reports was Chapman's Eleven.

“ Brooks has been chosen by John Coombs to drive his Connaught…

20 starters included eight Lotus Climax (3 of them 1100cc), a Lotus-Connaught driven by Tony Brooks, a Lotus-Maserati. Russell not mentioned at all. The only Lotus referred to by a type number was Chapman’s Eleven.

Grid does not include Russell.

No type numbers given for any cars.

“Russell had to retire the Lotus Connaught with negative brakes”

Brooks not mentioned. No type numbers given for any cars.

So it would seem to be the one car (of John Coombs), not necessarily an Eleven, & driven by either Brooks or Russell.

Jon, If this is one of the 4 engine photos, I think that you will find it is the Mike Anthony straight six Bristol engined Eleven, driven by Mark Lund in the Sports car Race: http://www.wsrp.cz/intgb1956.html#14

Was this really an Eleven, or Anthony's Mk. Ten?


After the Mark X Bristol Mike Anthony had a Lotus Eleven with a Bristol engine, apparently they managed to squeeze it under the bonnet by fitting it on its side!

My reply #145 referred to my photo of J. Coombs driving a Lotus Connaught.  What I didn't say was that it was a Lotus Mk X, and I would presume that this was the car that Tony Brooks raced at Silverstone.  The Mk XI's seemed to be a variation of a Mk VIII, but with the Mk IX rear suspension, and adapted to use larger engines such as the 2 litre Bristol.

Once again I hate to dispute anything that David McKinney has posted but maybe he has been given some bad
information at some time. So he is not wrong - he has just been provided with some 'non-factual facts'

I have been in touch with the current owner of the ex-Jim Palmer car and he assures me that it has never left
New Zealand. He purchased it in 1991 and has never shipped it to the UK. He has the original car, the original
chassis plate, and the New Zealand registration document listing all of the owners starting with Roly Crowther
and including himself when he had owned it in an earlier decade.

Maybe the Peter Bruin clone (which apparently had an Alfa Romeo engine) was the one that went to the UK?


One of the two cars built by Peter Bruin, and the one with the alfa engine, now resides in my garage.
I imported it into Australia in 2000, and this week purchased it from the guy that has owned it since that time.
I have the details of the owner prior to that, who got the car unfinished from Peter Bruin in 1985, finished it, registered it and drove it until 2000 when I purchased it for the next owner. It has taken me fifteen years to buy it from him.
It has always been described as a replica, never as a genuine Eleven. Probably the closest I have ever seen to a genuine car, but still a replica.
Any queries regarding this car can be directed to me, as I have its full provenance, from a letter from Peter Bruin stating he built the frame and bodywork, to the prev paperwork, including all import paperwork, registration papers, and indeed, the car. I have construction photos from its conception until today.
That should put that theory to rest.

I have no idea if this Eleven is lost, just that it was the most appropriate place to put this photo.

There's been a couple of boxes with old magazine clippings in my shed for a decade now, but the other day for some reason I had a scratch through them. This photo was amongst one of them. The boxes came from an uncle, but they relate to a chap named Peter Coleby, he was a member of the BARC in the UK and must have come to Australia in or around early 1960. As there's a March 1960 dated letter from the Light Car Club of Australia thanking him for his assistance at the previous Sunday's Rob Roy Hillclimb and application for membership

Anyway, cutting to the chase this photo might be able to be dated by those with Lotus Eleven knowledge. So over to you. 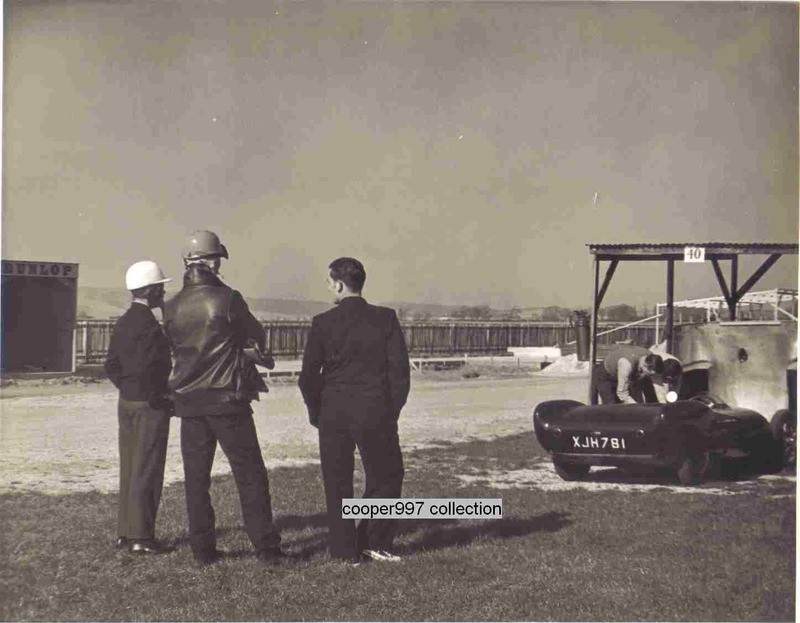 In 1957 Peter Coleby competed at the following events:

He did not trouble the scorers.

There is a letter from Peter Coleby, Motor Sport, Page 664, October 1958, lamenting the lack  of British minicars. Sent from Horsham, Surrey.

I appreciate your help Rupert, given the time you've obviously spent sorting through the REVS library. Hopefully the photo might come to the attention of someone with knowledge of that particular Lotus.

Not wishing to go too far off target, but Peter Coleby came up because he was the source of the photo. Going by the boxes of stuff I have he was involved in war service and received a DFC and a quick google finds his name in a couple of places. He comes up in the January 1949 Motor Sport archive, because he owned a 1924 AC and London Gazettes relating to RAF duty..

Kicking around here is the 10 March 1961 Autosport with his story about 12 months down under (Australia) and a rejected 1959 feature he had written for the BARC Gazette. Complete with General Secretary, H J Morgan's "... not quite suitable for us, ..." covering letter.

By the story, he obviously rolled the Goggo at Brands in June 1958.

Is it possible to publish the BARC Gazette story? That would be brilliant after all these years. RGDS RLT

That did go through my head Rupert. But do I start a thread for Peter Coleby or try to find one BARC related?

Either will do! Coleby sounds like an interesting chap. His Autosport report also? RGDS RLT

This thread started with a search for the Lotus-Valiant. Never stop looking!

I added the following comments:

So this picture takes the car to the spring of 1966? I think subsequently advertised in Competition Press.
I picked up a rumour that the car was sold to Los Angeles to a guy intending to race it at Bonneville (possibly El Mirage)?

Further enquiries have drawn a blank so far.