What can you tell me about Ernie McAfee?

hi all,
As im very interested in the early 50's - late 50's american sports car racing scene, the mention of Ernie Mcafee pops up fairy regularly. I understand he was an early hot-rodder then a general mechanic, importer of SIATA cars then a fairly successful sports car racer (Ferrari and OSCA). I know he had a shop in LA and the setting of his death in 1956.
Im interested in color on Ernie and if anyone has some more insight to the way he figures in early America road racing would be appreciated - his stature.
love to hear your thoughts.
elad

That's Ernie McAfee in what I saw at the time as his all-conquering brighter-than-baby-blue 4.9 Ferrari. When I was a lad of 16, 17, 18, my friends and I made frequent evening cruises to visit all the foreign-car dealerships and shops in the Los Angeles area. A highlight was always Ernie's place on Sunset Boulevard. More than once we showed up well after closing to run our eyes and hands over the exotica on the lot, and found Ernie in the shop behind an accordion-style steel gate, working on the race car. He never slowed down in his machine-ations, nor did he open the gate, but he seemed to enjoy chatting and answering questions as long as we were there. I don't remember why I (we) liked him best of all the racers of the day (1954, '55, '56), but it was as near a rock-star admiration as I'd had.

Among the cars on the lot were a Talbot-Lago with a deflector screen in front of the windscreen, and one of the B.A.T.s, maybe 7? 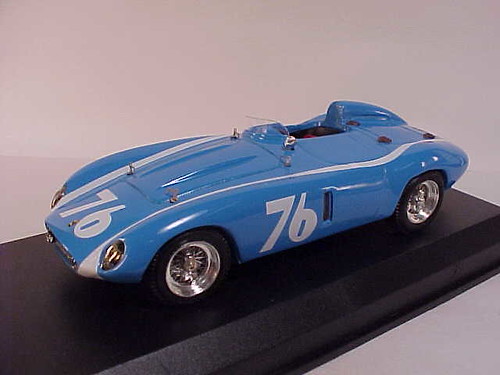 thanks... very illuminating.
im on the verge of purchasing Ernie's old OSCA MT4 "the Whale". Im very intrigued with what got him to run both the OSCA and the Ferrari in the same time (he would typically drive both at the same venue).
Turns out that he installed the OSCA Simpson land speed record car engine in it #1522 (an italian hot-rod special??), thus getting the car to be very comp' with the Porsche 550's. The engine is still with the car today.
Does anyone have any more info on the car and Mcafee during that time, pictures would be super.
rgds
elad

I would think that "dretceterini" and John DeBoer who both post on this forum would be of help to you.
As an aside, there is a virtually derelict MT4 up here that an ex Californian keeps promising to rebuild. Apparently it was on it's way to the land fill in California and he intervened....

I would imagine Ernie would have raced both the OSCA and the Ferrari at the same meetings as they were in different classes, and awards/points were earned within each class.
In the early 1950's within the SCCA points for different classes were added together to determine who was the national championship winner. The more cars you could afford to run, the better your chances of being the champion. I think that system changed in 1953 or 1954 whereby they had class national champions.
Terry.

I also in my youth stopped by Ernie's shop on Sunset Boulevard. He had the greatest cars known to man in there.

I think Tony Adriaensens at Corsa Research would be a good person to talk to. Between his book "Weekend Heroes" and the Siata information in his book "OTTOVU" he has a lot of info on McAffee and probably a lot that didn't make it into the books.
Try

thanks Antonvrs, am already in touch with tony re Mcafee. I own the Weekend heroes book and its a jem!
Considine was great help in trying to recall the engine swap between my OSCA and his...

im extremly facinated by the fact that so much of today's vintage as well as sports car cuilture, somehow links back to Macafee Enginnering and Ernie himself. I wonder if there is enough interest out there to compose a book about ernie and the establishment... so much of this hiostory is stored in people's minds, and with time that will vanish. got to belive its important to comprehansivly documnet.

Well, McAffee's place was Mecca for gearheads in the '50s and early '60s. I wonder what happened to the beautiful, jewel-like Maserati road race motorbikes that they had in the showroom for so long?
Have you spoken with Chris Cord about McAffee's yet? His stepdad, Bill Doheny, was the money behind Ernie McAffee Engineering. If you pm me, I think I can put you in touch with him.
Anton

Originally posted by Frank S
That's Ernie McAfee in what I saw at the time as his all-conquering brighter-than-baby-blue 4.9 Ferrari.

Joe Smith was an early race car photographer in So Cal and knew Ernie pretty well. Joe sold his photo collection to Tony Adriaensens of Corsa Research in Antwerp, Belgium. I don't know exactly what Tony has, but he may have something of interest to you that wasn't used in the book..

Originally posted by Frank S
That's Ernie McAfee in what I saw at the time as his all-conquering brighter-than-baby-blue 4.9 Ferrari.

I wouldn't be surprised. Of course my statement is true, too.


I wouldn't be surprised. Of course my statement is true, too. Frank S.

I reread it carefully this time, and you certainly are right!
Tom

As long as we are talking about the same Ernie McAfee (and I assume we are, from the little I know about him) he is my grandfather.

I am, too, looking for information on him. My grandmother Jean passed several years ago so I never got a chance to ask her -- I was not yet at an age where my interest was sparked.

The best way to contact me is via email -- snyder.aimee@gmail.com

Please, any assistance would be greatly appreciated!!!!!!

Originally posted by aimeesnyder
Hello everyone,

As long as we are talking about the same Ernie McAfee (and I assume we are, from the little I know about him) he is my grandfather.

I am, too, looking for information on him. My grandmother Jean passed several years ago so I never got a chance to ask her -- I was not yet at an age where my interest was sparked.

The best way to contact me is via email -- snyder.aimee@gmail.com

Please, any assistance would be greatly appreciated!!!!!!

Hi Aimee,
let me start by saying that your grandfather is somewhat of an icon to many fans of early 50's car racing in the us.
I have toyed with the idea of trying to put together a book with your grandfather as the subject. Its still a work in progress - i have to convince someone to write it...

What stands out the total commitment to a goal and the absolute traits of ALPHA personality that Ernie displayed.
What always sticks in my mind - for example - is the fact that he spent many weeks lightning his car (siata 8v) punching holes in everything but the pistons... he then proceeded to lose close to 30 pounds, all in an effort to reduce the total weight of the car ahead of the Panamericana race. Thats what i call focus! anyone who has seen the great b+w pictures in Tony's 8v book knows what im referring to.

I sent you an email, as i happen to own a few things that once belonged to your grandfather.
elad

About 30 years ago a friend who worked with Ernie in the '50s found out that I was working on Siata 8V cars and gave me a couple of wrenches that Ernie had carried on the Carrera when he ran the Siata. They are SnapOn metric double end wrenches that have been ground down to about 2/3 of their normal weight- or maybe a little less.
Maybe I'll take a picture of them tomorrow if someone wants to post it. Fotoshack is too much of a pain for me and I don't have my .mac site up yet. I'm waiting for my 8 year old daughter to show me how.
Anton

The wrenches Ernie McAfee took with him on the Carrera race.
Aimee: "These wrenches were typical of Ernie's zeal in
preparing his Siata(chassis BS503) for the Carrera.
By the way, the remains of BS503 consisting of the body, seats,
windshield and convertible top, plus the mechanical parts but NOT the
chassis have recently been sold to Europe and are to be restored.
There was an article in Hop Up magazine in '53 called "The Holey
Terror" about McAfee and the preparation of BS503 for the Carrera.
He drilled everything full of holes and lightened the car as much as
possible and sleeved the engine to under 1600 cc for the under 1600cc
class."
Anton
photo posted for Anton