I have read the following on another forum (aviation) and as manycar enthusisats share an interest in avaiation thought it may get a response here.

Hawthorn had a pilots license and owned and operated Percival P10 Vega Gull, G-AHET, out of Fairoaks in the late 1950's and possibly still owned it at the time of his death in the accident on the A3 in Jan 1959.
G-INFO [an aircraft registration website] has it as de-registered, does anyone know what happened to it...??"

So over to TNF - anybody know what happened to Mike Hawthorn's plane?

This doesn't answer your question, but thought it might be of interest.

The 1958 and 1959 editions of the Ian Allan "bible" ABC of Civil Aircraft Markings show it registered to The Tourist Trophy Garage. (1959 would have been complied before his death).
1960 shows it registered to E.N.Husbands.
1961 shows G-AHET as an Avro York of Skyways.
1962 shows no HET but shows HEY as a Skyways York (there was no HEY listed in 61)
It seems fairly likely that the 61 entry is incorrect and was a misprint for HEY and HET disappeared from the UK civil register some time in 60. It could have been sold abroad or scrapped.

(No I don't own an anorak. Living near Heathrow, collecting aircraft numbers was a favourite schoolboy occupation for a few years - years that happen to co-incide)

So I shouldn't ask about Henry O'Neal de Hane Segrave's Segrave Meteor then!!??

"Acording to the 'bible',the Air-Britain Civil Aircraft Register 1919-1999,
G-AHET was damaged beyond repair in a forced landing at Kirkby Trading Estate,near Liverpool on 2nd May 1960"

Why not ? but not on a Hawthorn thread, presumably.

I have a vague recollection Hawthorn took part in an air race (King's Cup?). The tail number 62 in the photograph may refer to that?

I have a vague recollection Hawthorn took part in an air race (King's Cup?). The tail number 62 in the photograph may refer to that?

Just to update this in the light of knowledge gained from the book, some Fairoaks logs survive and record two flights for Mike’s Percival P10 Vega Gull, registered G-AHET, in 1958: 7 April where he used it to get to and from the Goodwood meeting with Tom Mayhew as a passenger, and 4 May with no comments. In some photographs the Gull carries the number ‘62’ on the tail —it had taken place in the Kemsley Challenge cup race at Coventry in July 1959. However, this was after Mike died and it then had a new owner. Mike had decided after retiring that he wanted to get into air racing, but died before he could achieve this ambition.

Mike also owned a Fairchild Argus - the CAA records the Argus as registered to Leslie on 15 May 1947, then cancelled and “Sold to Australia” on 27 September 1954 — although Mike still records himself flying it in 1956 in Champion Year.

When new, the aircraft cost £1750 in 1937 — 90 were built but only three currently survive. G-AEZJ that you see below is the only airworthy Vega Gull left in the world. With the Gull is Mike's Riley Ulster Imp, currently owned by Tim Ely, and Nigel Webb's recreation of Mike's Jaguar Mk1, all seen together at Biggin Hill in in Kent last year.

For those air fans amongst you, G-AEZJ should be an exhibit at the Goodwood Revival this year and will fly in

The only aspect that hasn't been confirmed is the colour of Mike's plane. Period photos generally show it as two tone light/dark with the light parts being behind the cockpit to the tail and above the registration mark with the rest and wings dark. Possibly silver/maroon along the lines of the one above? 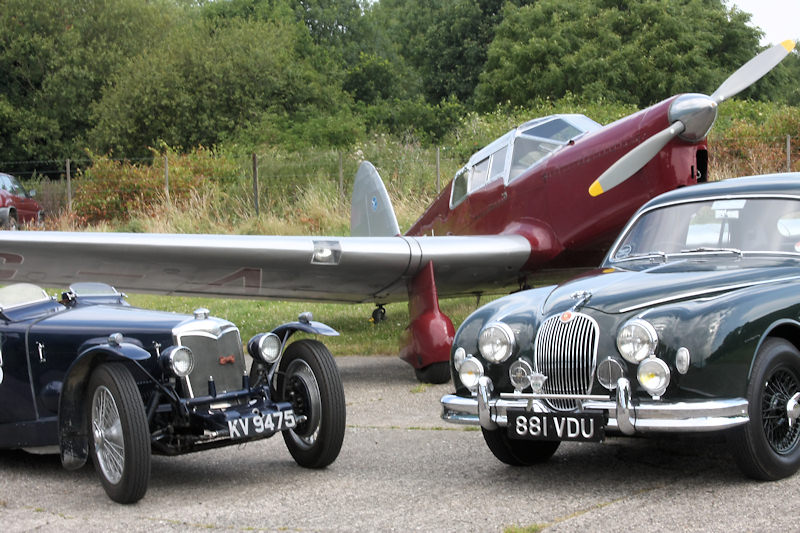 The cockpit would be almost identical to Mike’s aircraft. The radio equipment is much later though. 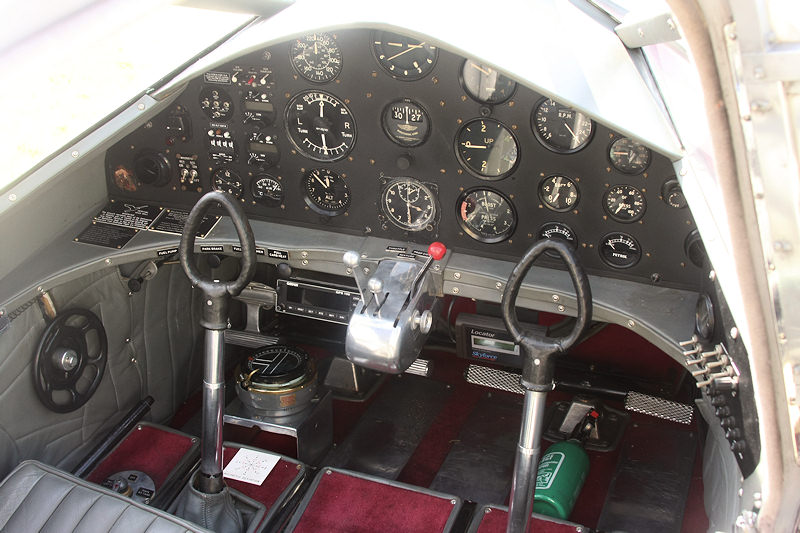 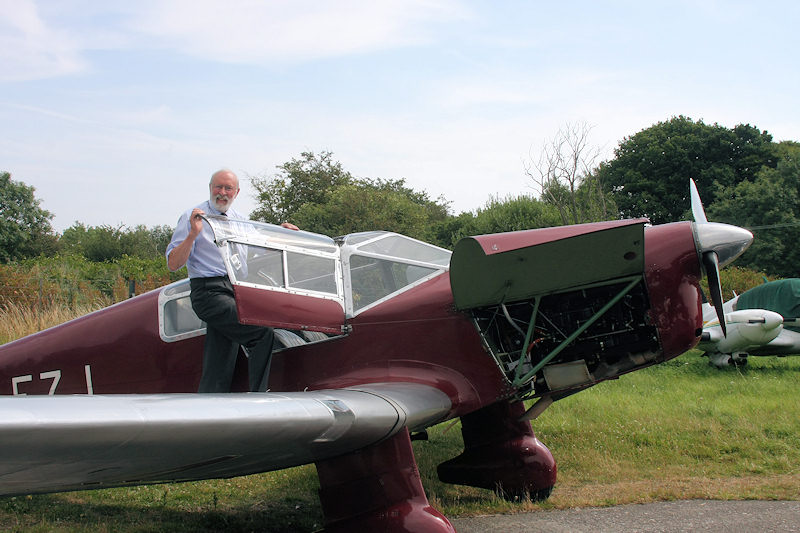 No idea whether this tells you anything new Tony, but a here's a couple of links to old issues of Flight, featuring Mike:

No idea whether this tells you anything new Tony, but a here's a couple of links to old issues of Flight, featuring Mike:

Thanks Richard. Shame that Mike never realised his ambition to fly a Spitfire! The second link I knew of the contents but hadn't seen the actual clip. Re the quote:
AT THE STEERING WHEEL CLUB on Monday, October 19 (the anniversary of the Moroccan Grand Prix), Mike's Mug, the
tankard that was to have been presented by the Steering Wheel Qub to Mike Hawthorn, was handed over by racing driver Jack
Brabham to A. Cdre. A. H. Wheeler, representing the Royal Aero Club.

The tankard symbolizes the common enthusiasm of those who drive motor cars, and fly aeroplanes, for sport. Hawthorn, who
owned an Argus and later a Vega Gull, used his aircraft both for sport and for business travel, and the Royal Aero Club is to award
the tankard to the pilot who, in the Club's opinion, has demonstrated most convincingly "the utility of a light aircraft for
business and executive as well as private purposes.
It seems the tankard existed and was presented until the mid-1960s but then vanished and I've been unable to find any trace of it. If anyone know anything further of course ....

Great photos of G-AEZJ, it was at a fly-in in Devon I went to about three years ago and unfortunately haven't seen it again, gorgeous aircraft though

Great photos of G-AEZJ, it was at a fly-in in Devon I went to about three years ago and unfortunately haven't seen it again, gorgeous aircraft though

Thanks, here are few more from that photoshoot. I'm not an aircraft person but did find the day very interesting at Biggin Hill once security had got over strangers with cameras being around. The owner, David Hume, is also a Mike fan and was intrigued to sit in the recreation of Mike's car. 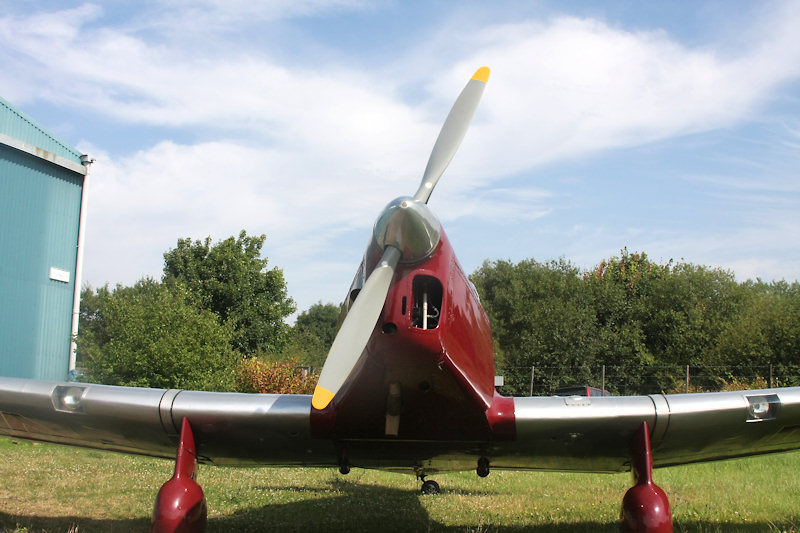 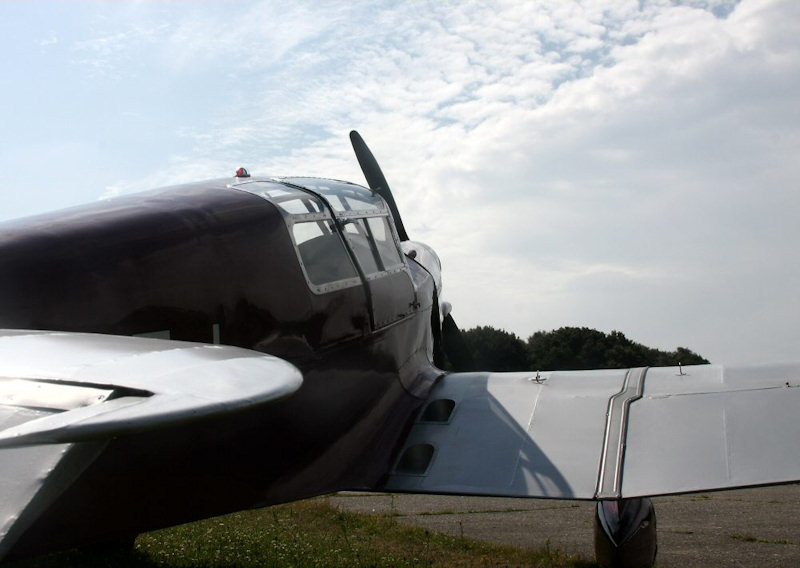 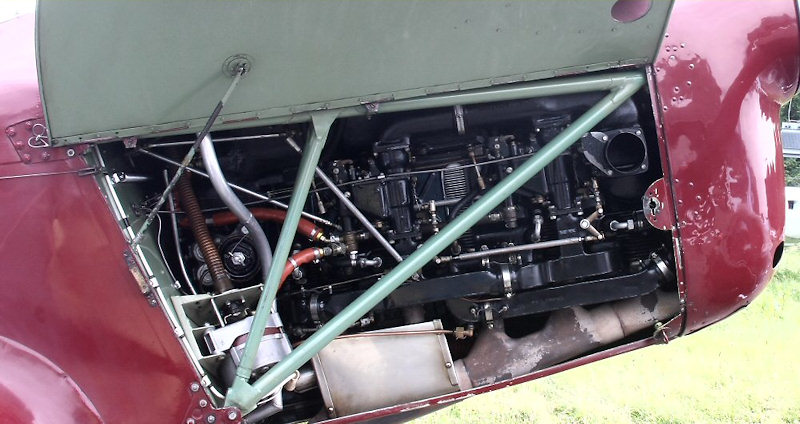 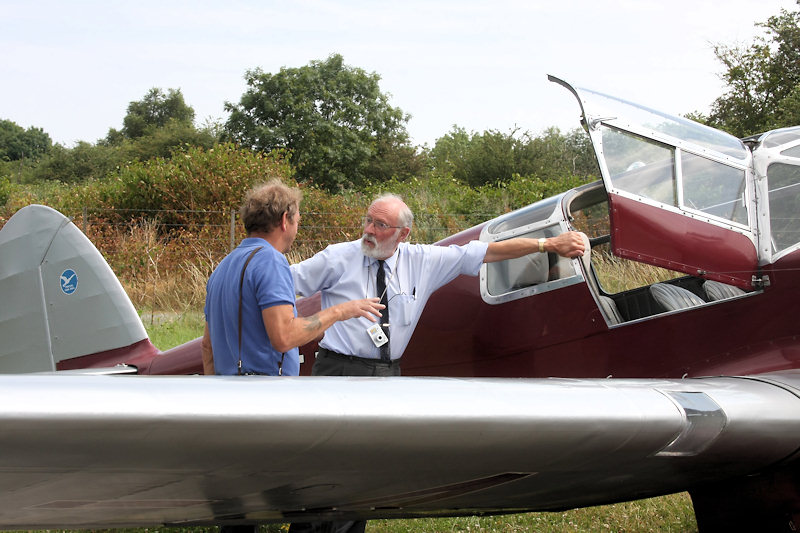 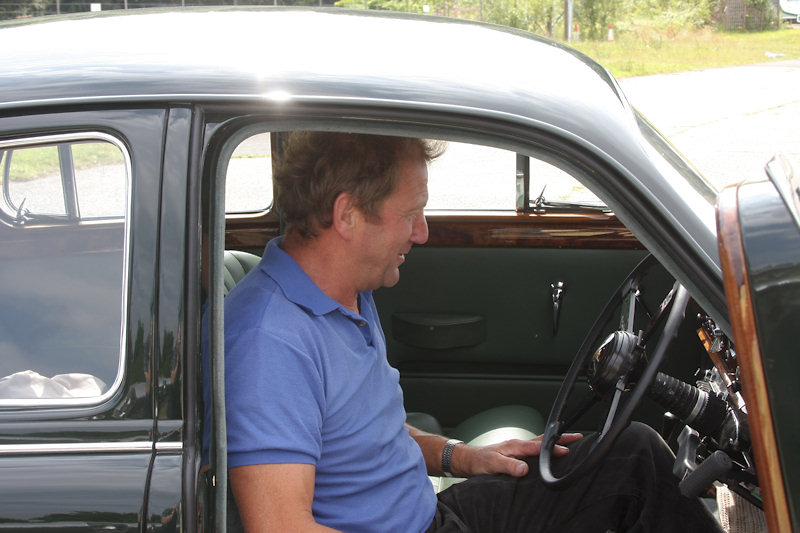 I'm a member of the Auster Club (British small high wing light aircraft, built from the late 30's onwards), and the owner of the Vega Gull is also a member as he has a very nice 1961 Auster. Unfortunately I can't be at Goodwood (student budget!) but fingers crossed will see it later this year.

Great to see more photographs of it, got to be one of the most beautiful aircraft ever built