58 replies to this topic

In the begening of 1968, the ex-driver, ex-minister and enthousiast, André Moynet decided to created a new sportcars.

He recruted Jacques Hubert, who just had finished the design of the Elina Formule Fance for JeanPierre Beltoise, to draw a brand new chassis.

But they were late, so André Moynet decided to buy a Costin Nathan tubular and wood chassis. They put a nice body on it.

For the engine, some contact with Honda and Renault gave nothing, so they decided to install a Simca engine coming directly from the little Simca Coupé 1200 S. They put in cenral position.

Sekler, an ex-mechanic fromCD take the mechanical preparation. He put two twin Solex and claimed a very poor 102 bhp...The gearbox was a Renault. 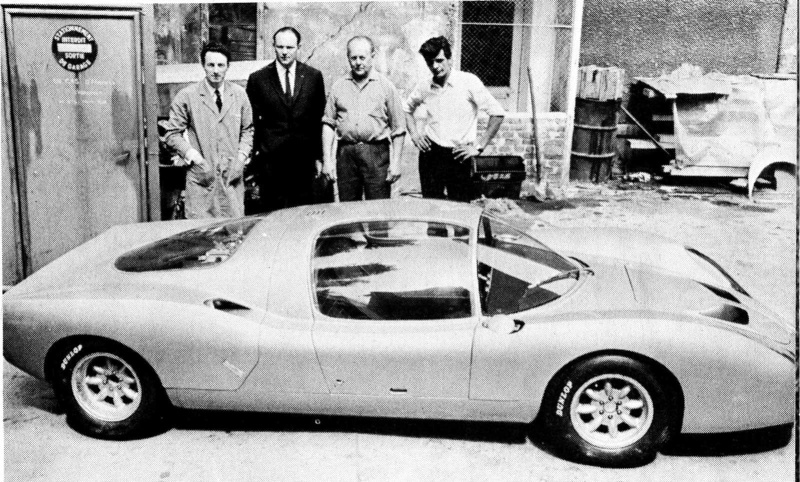 The Moynet taht ran at LeMans looked slightly different than the one in the photo, but it was powered by Simca...

Why do I always associate the Moynet with Grac rather than Astra Nathan ? There has been another try in 1975 if I am not mistaken - has that had any links to Grac ??

Definitively nothing to see with the GRAC adventure.
Any links. 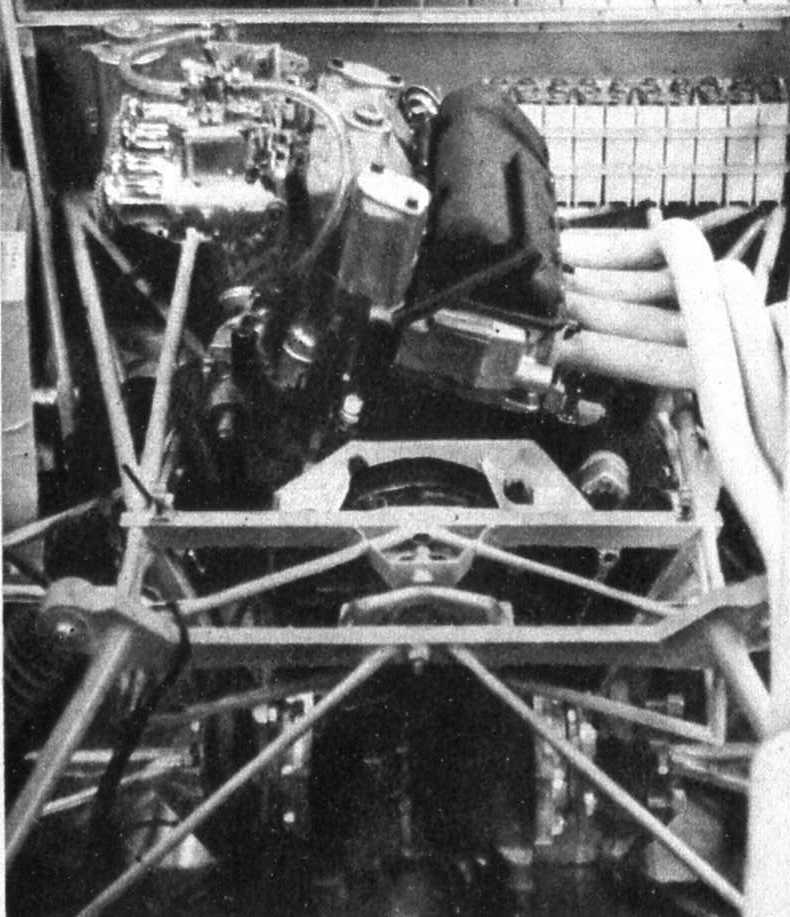 The 1968 Le Mans Moynet is this one... continue the story dear gerard
(the 1975 Le Mans Moynet was another car or chassis :it was a CG chassis and they fit the body of this one on it)

Moynet was an WW2 fighter pilot, before to be a ministre.

And this is the Moynet MH68 (for Moynet Hubert 1968) on the track for the first test during spring 1968. I believe it's André Moynet himself behind the wheel.

I will direct Roger Nathan to this thread. I am sure it will be of interest to him.

It could be very interresting to have his opinion on the story !

The number 54 was stopped on the 8th lap with big problem of oil circulation. Max Jean pushed the car in the pit, but after trying to repair the little thing was out at the end of the 3rd hour.

What about they use the body to make the LM75 car ? I read something about that years ago or they use the molded to make the 75 cars... But what happens to the 68 chassis or car ? a mystery...

GERARD, the MOYNET SIMCA at the COUPES du Salon in MONTLHERY in 1968.

the car was driven by Jean MAX and Rene LIGONNET.

I think it was to prepare LE MANS race. 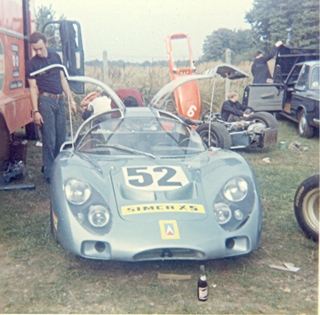 Does it's the model name ? In the press of the period it was presented as Moynet MH68.

I have to change my glasses !!!

Does a Moynet still exist today? If so, where and who is the owner(s)?

Gérard,
Simca XS was the name of the car. Sometimes also called MH. Its engine came from the coupé Simca 1200S, a four cylinders of 1204 cc. This sticker appeared on the saturday morning of the le Mans race, which meant the now close relation with Simca.
For the 1975 version, they kept the central frame of the former car.

Does a Moynet still exist today?

Well, this one was certainly in the Museum of Film and Automobile near Antibes in May 2006.

Will be interesting to see it back on the circuit again. Perhaps someone has already taken the step??

The 1975 car was the one I was talking about. Thanks for the clarification...

Is my recollection right that Gérard had clarified at one point that the driver was called Max Jean and not Jean Max ??

He was infact Max Jean. Early race reports or programmes made the mistake of calling him Jean Max. Unfortunately the latter was blatantly copied by some "sources" of the years.

Could this be Stéphane Seckler who had also been involved with the Elina ? If my memory serves me well he has built the Elina SS "au chassis tubulaire".

I believe that is the same Stéphane Seckler. Do you know him ?

I have good pictures in my archives of the Elina SS. I search tomorrow.

Is the 1975 car the one with the all-female driving team (Mouton-Dacremont-hoepfner)?

In 1975, in France, it was the year of the woman.
At the request of Esso, it was decided to honour the event by composing a crew exclusively feminine. It was a first one at le Mans for all of the three.

This is the construction of the second (?) Moynet early in 1975.

André Moynet have a new tubular spaceframe and put in it the JRD engine. This engine was developped for the french Coupe Simca Shell initialised by Henri Chemin for the promotion of french sportscars constructors (GRAC, BBM, CESCA etc..). It was a 2 liters developped from Chrysler bloc who gave about 200 bhp. 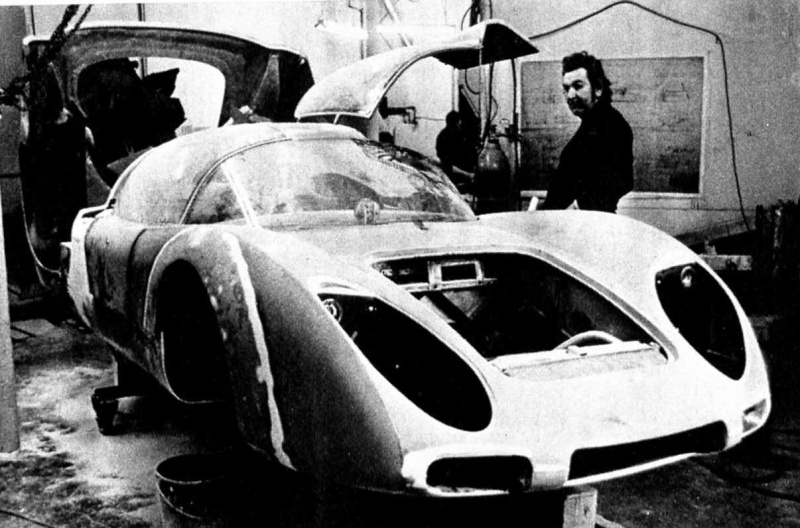 Moynet seems to have had a pretty long sevice history.

Thanks for this interresting "find"

Perharps a little optimistic story (for the racing cars party) as we can read :

The reality is more modest.

It was drived by three women : Christine Dacremont, Michèle Mouton and Mariane Hoepfner.

The truth is that they won the 2 liters class. 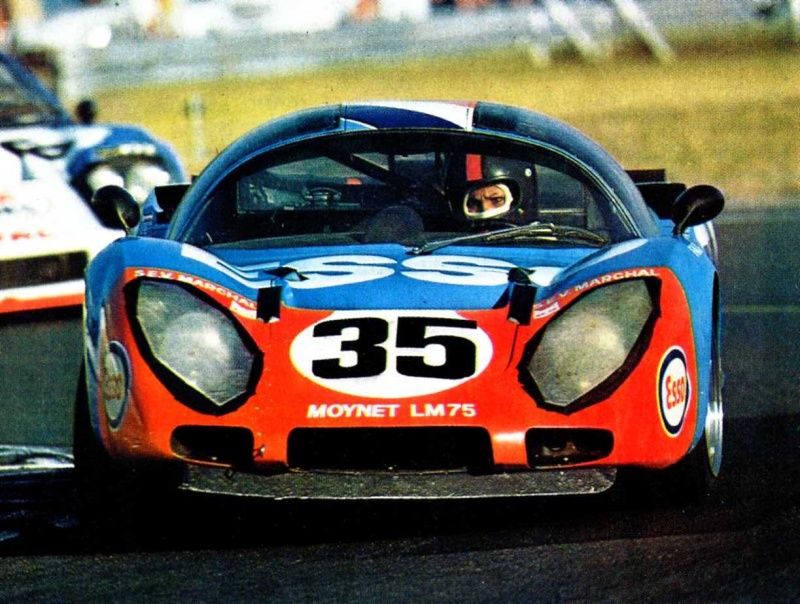 the frame of the LM75 was one of the "CG proto MC", i am sure of that, but i have to find the source... Maybe on the CG website.

I was thinking it was a brand new one ??

Originally posted by AMICALEMANS
the frame of the LM75 was one of the "CG proto MC", i am sure of that, but i have to find the source... Maybe on the CG website.

Six MC proto chassis were realized by CG. Five were used by CG for the MC "coupés" or spyders. The sixth was used by Moynet for his 1975 car.

i knew it was true, thanks a lot Mr Gicleux...
i am not sure that Moynet himself was involved in the LM75...

An other pic of the Moynet LM75 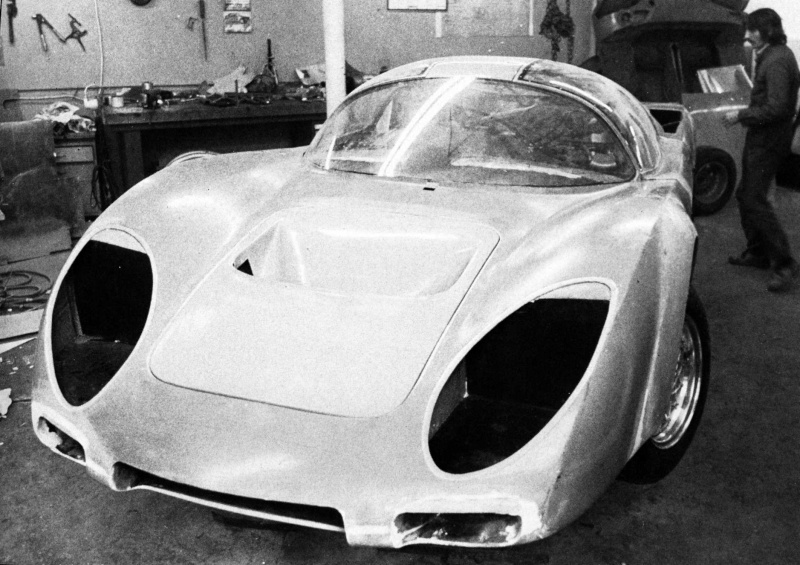 My French is pretty spotty, but I note that, among his other decorations, he was awarded a U.S. Silver Star. SS's have never been handed out to just anyone, so it appears that he was a pretty brave warrior who certainly would pass my "foxhole test".

What i think about Moynet LM75

It seems to me that in 75 this car had a very old fashioned body (just look at Lola and Chevron wich was in the same class !) this car was more a Ferrari P3/P4 style than a 312PB style !
I am not very sure that Moynet was really involved in the 75 car. So who promote the building of this car ? ESSO ? The teamp take an CG proto MC and fit the 68 body on it, just maybe because it was simple to homologate the car or because they did not have time to build one. They modify the 68 body (just look at the front wheels arches !).

Maybe we should ask Michele Mouton, if she knows, about this LM adventure ?

An other view of the Moynet LM75

Originally posted by AMICALEMANS
Maybe we should ask Michele Mouton, if she knows, about this LM adventure ?

In the book "Michèle Mouton, du hasard au défi" by Claude Guarnieri:
Michèle Mouton: "...After all I had a contract with Esso et it seemed to me difficult to refuse. Esso was putting 1 million francs (1975) in this affair. So it was not a windy dream.".
A week before the race , Michèle met Marianne and Christine at Magy-Cours for the first turns of wheels of the car. It pleased them and the fact that ex-technicians of Matra Sports were present trusted them.
The assembling of the Moynet, under supervision of Robert Pellegrino, an ex of naval works, had begun in march. She was issued from the one which raced at Le Mans in 1968. It received a Simca-JRD engine of 200 hp and weighted 675 kg.

So the car could be named Esso instead of Moynet !
The LM75 was a Esso project maybe because they want to beat the ELF Alpine team with two ladies at the wheel.

It was a strange way, but they won the class.... and ELF did not finish the race...

Is that a correct story ?

Doesn't MC stand for MoteurCentrale? I remember I read something similar when I was a very young kid, so I'd possibly fail...

oups you were rightt and i am wrong : MC Moteur Central and this GC was a Matra project.

where the LM75 was built ? at Romanrantin ?

Don't know where the assembly was made. For Sport-Auto june and july 1975 issues, the Moynet is a CG-MC chassis fitted with a Simca-JRD engine, a Porsche gearbox and the 1968 body.

There was an article by Marc Gosselin in "Auto Rétro" N°21 of May 1982 which indicates that MC stood both for "moteur central" AND "Matra Chrysler" ...

An article by Gilles Bonnafous in "Automobilia" N°41 (Nov./Dec. 1999) stipulates that "a seventh frame was surplus to requirement" when CG (Chappe & Gessalin) closed down their operation in Brie-Comte-Robert; subsequently it had been sold to Moynet.

However, the year of winding down C&G has been given as 1974 and 1975 according to which source you consult.

Originally posted by r.atlos
An article by Gilles Bonnafous in "Automobilia" N°41 (Nov./Dec. 1999) stipulates that "a seventh frame was surplus to requirement" when CG (Chappe & Gessalin) closed down their operation in Brie-Comte-Robert; subsequently it had been sold to Moynet.

From the book "Chappe Gessalin, CG, les artisans constructeurs" by Michel Delannoy with the collaboration of Albert Chappe, Jean Gessalin and Bernard Boyer:A seventh chassis exists, it is the opus of a passionate who realized a copy; a copy which has to be identified as such.

From the same source, CG stopped its car activity in mai 1974.

Who is the original 68 Costin frame today ?

I've heard that this chassis was destroyed by flame in a garage fire ??
But I'm not sure...
we have to search more

My friend Didier Martin, who wrote the little book on Pygmée, tell me he would meet Jacques Hubert in the next days for more explanation of the 1968 project and the link with the 1975 Esso adventure...
Wait and see !