The Benguela circuit, adjacent to the airstrip at this coastal town in Angola, is still there and looks as though it might still be in use, even if it lacks facilities like covered pits.

We obviously share an interest in racing circuits, Terry! I like to look them up in Google Earth too. There are so many fascinating African circuits we know so little about.


According to Darren Galpin's track database, Benguela was used in the 1960s. In fact, it was inaugurated on 21 May 1972. It substituted the "Circuito da Praia Morena", a traditional street circuit used in the 1960s.

I don't know until when the autodrome was used, but at some point it was abandoned for a long time. Apparently, it came back to life with a motorcycle race in 2001, the "1st Grand Prix of Benguela".

It doesn't appear to be in use anymore, does it? Strangely, the Praia Morena street circuit seems to have made a comeback with some sort of motorcycle race:

Check out the galleries at http://www.sanzalangola.com.

Incidentally, Angola's other permanent circuit at Luanda was apparently inaugurated nearly at the same time, on 28 May 1972.

Like Benguela, the permanent circuit of Luanda was built as a substitute for a street circuit. There are some great photos of the Autodromo de Luanda here:

Luanda seems to be in better shape these days and may still be in use for national races (and if it still is, the 6.28 km long course actually belongs in my 'longest permanent circuits' list in the racing circuits almanac thread). 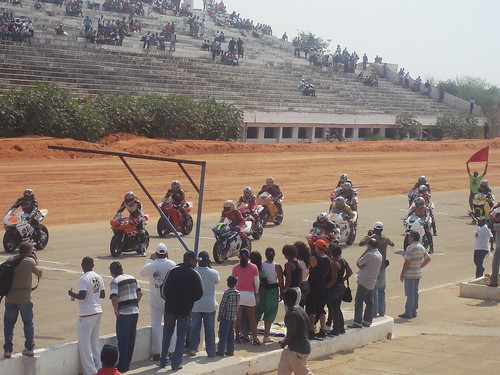 We should definitely start a society... the G.E.R.C.A. The Google Earth Race Circuit Anoraks!

I would be proud to be a GERCA!

That Benguela circuit looks remarkably 'modern' in its layout. A typical Tilke-drome with a long straight and a series of loops. Then again, I suppose Jarama opened in the 1960s too.

The African Motorcycle Union had a congress in Johannesburg last year and Angola was still not part of the AMU. During the seminar it was reported, though, that there was no formalised structure in Angola to run motorcycle events and that events were simply organised by a group of competitors whenever they felt like running an event. It was also reported that events in Angola attracted some 20,000 spectators and that the Police were the main ‘sponsors’ of the events!

Originally posted by Barry Boor
That Benguela circuit looks remarkably 'modern' in its layout. A typical Tilke-drome with a long straight and a series of loops. Then again, I suppose Jarama opened in the 1960s too.


That Benguela circuit looks remarkably 'modern' in its layout. A typical Tilke-drome with a long straight and a series of loops.

I don't know Barry, I'd say Benguela has a certain flow to it that Tilke's-terrible-dromes never premit. Herr Tilke loves his fiddly low speed complexes far too much.
This one looks as if it would be quite quick by today's standards.

Race circuit south east of Luanda, still in use...

I'm another of these Google Earth circuit junkies.

One track I haven't tracked down yet in Angola - probably because it's bloody obscure - is the Restinga track, which Darren Galpin's site describes as

A track located in the town of Lobito alongside Restinga beach in Angola. Used in the 1960s.

That's about it on the web. My research suggests the Restinga area of Lobito is a long peninsula - which ends in this:

So, could this be it, perhaps?

And, just for completeness, what I believe to be the path of Nova Lisboa:

EDIT: not quite sure why these pics aren't showing up, as I've used the correct IMG tags: too few posts here, perhaps?

Imageshack have changed the format of their image posting.

After you upload your pictures, you now need to click "+ Show Advanced Linking" at the bottom of the page displaying all the different links, then copy the link at the bottom.

Got it now - thanks!

EDIT: Aha, I've hit a rich seam here with some Googling. http://autosport.aei...s.stories/39177 seems to have links to a lot of Angolan and Mozambique circuits:

Though my Portuguese isn't up to much, this would suggest I was about 1km too far to the North East for my guess at Restinga.

In a select few localities in the US and Australia you can "tour" the circuits using Google Map/Street View.

This only applies to street circuits of course. I've "toured" the old Pebble Beach and Ascarate ParkK circuits in the US, also Bathurst, Lobethal, Pingelly, Toodyay, Strathpine, and one or two others in Australia by "driving" along them using Street View. For a look at what you can see, check the Ascarate Park thread.