These carbs were used on a late-fifties drag car... can anyone recognise them? 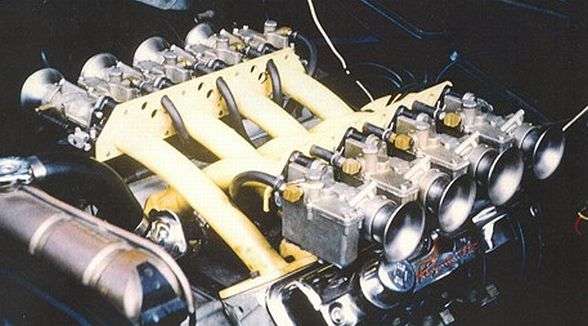 Those are Carter YH carburetors. Often called a YF, which is incorrect. The YH is a sidedraft variant of the Carter YF. (So it is essentially a YF with the float bowl reoriented 90 degrees.) Standard equipment on 53-55 Corvettes (I6, three carbs) and later on, turbocharged Corvairs (flat 6, single carb). Also early '50s OHV Nash sixes with optional twin carburetors.

Also used on tow-motor and marine applications etc where low engine cover height was required. Gray Marine did marine conversions of AMC V8s with two Carter YHs... sorta similar in layout to Rover V8 with twin SU HIF6 teapots. I knew a guy named Mike Kollins (now deceased, RIP) who built a '50s-style sports car powered by a Duesenberg J straight eight engine that he hot-rodded with four Carter YH carbs. Sort of Facel Vega looking but with a really looong hood, a wondrous thing. For a long time the Carter YH was virtually the only sidedraft carb decent for performance use that was widely available in the U.S.

This is a long time ago for me so it's kind of fuzzy but I believe Y39 is the Mercury Marine designation for a Rochester 2GC, a two-barrel downdraft. "Top choke" refers to a version with an integral choke thermostat housing mounted on the air horn casting, while "bottom choke" refers to a version with the choke thermostat mounted on the throttle body casting.

Contrary to popular lore, Carter had no formal connection to General Motors. It was an independent company founded by in St. Louis, MO by inventor Will Carter, who developed a very early downdraft carburetor, perhaps the first, and another model with an integral vacuum fuel pump. Carter's first big OE application was for the first Chevrolet Sixes. Went out of business in the 1990's; rights to its four-barrel carbs were acquired by Edelbrock and are still manufactured under the Edelbrock name. Rochester was GM's in-house carburetor division based in Rochester, NY. Rochester also did a side-draft carb for the Olds 215 turbo, rather similar to a Carter YH. I used to have one on my desk.

Originally posted by McGuire
.... for the Olds 215 turbo, rather similar to a Carter YH. I used to have one on my desk.

Well the Olds is all alloy as we know but still, must be a bloody strong desk

Originally posted by McGuire
rights to its four-barrel carbs were acquired by Edelbrock and are still manufactured under the Edelbrock name. ]

Ever try to make one of those go around a corner? What a pain. Short answer is that I never figured it out. It was a good enough carb to tune and all, but it took a center hung Holley to fix the problem.


Well the Olds is all alloy as we know but still, must be a bloody strong desk

Just the turbo and intake setup. It was a display piece, all chromed, enameled and tricked out. Wish I had kept it.

Originally posted by Fat Boy
Ever try to make one of those go around a corner? What a pain. Short answer is that I never figured it out. It was a good enough carb to tune and all, but it took a center hung Holley to fix the problem.

Nope, can't be done really. The bowl volumes are too small no matter how you orient the floats. That's how and why the Holley was developed, originally for NASCAR. Ralph Johnson, former Chevy engineer who went to Holley, later worked with Smokey Yunick for many years. Might have the world's largest collection of Snap-On tools.

In Carter lingo the initials mean things. AFB is Aluminum Four Barrel. WCFB is White Cast Four Barrel. AVS is Air Valve Secondary. A YH is part cast-iron, weighs a ton and I don't know what the letters mean.

A closer look at the Carter YH...

I remember my good fortune when finding out that the rebuild kits for the 180-hp Corvair (which you could get in the late '60's) was the pretty much the same carb as my '54 Corvette. Couldn't get rebuild kits if you specified that model. Bought the car for $250.

Originally posted by Ray Bell
These carbs were used on a late-fifties drag car... can anyone recognise them?

Hey Mr. Bell, what can you tell us about the engine? Obviously it's a Mopar, while the intake manifold design suggests some familiarity with Chrysler's work on ram tuning. Was this engine built by a Chrysler Engineering employee?

Yes, and thanks for the identification of the carbies... great work...

The engine is an early Poly 'A-engine'... here's the thread in which I found it:

Barnes Daniels, of course. When I saw your photo of the manifold I knew it had to be one of those guys. He was a Chrysler engineer, one of the original Ram Chargers and a close associate of Tom Hoover, Wayne Erickson, Bill Shope, Dick Burke and company.

As you know, at that time Chrysler was deep into development work on ram tuning, which resulted in the crossram engines. Hoover and Erickson built tuned-length manifolds similar to the one above for their cars but with downdraft carbs. Hoover's used two different tract lengths to broaden the torque curve (like the Chevy Can Am engines). On the dyno mule manifolds at Chrysler Engineering in Highland Park, the tubes went straight up for convenience (no hood clearance issues) with a plenum on top -- that's how the so-called tunnel ram manifold was born. The High and Mighty, the Ram Chargers' club car, used one of these dyno manifolds.

The Ram Chargers are a great story. More here:

Originally posted by McGuire
I knew a guy named Mike Kollins (now deceased, RIP) who built a '50s-style sports car powered by a Duesenberg J straight eight engine that he hot-rodded with four Carter YH carbs. Sort of Facel Vega looking but with a really looong hood, a wondrous thing. For a long time the Carter YH was virtually the only sidedraft carb decent for performance use that was widely available in the U.S.

Here is a photo of Mike Kollins' Duesenberg-powered special, which he liked to call a "1959 Duesenberg," taking the concept that this is what a Duesenberg might be if it was still in business in the '50s, when he built it. (It took him almost ten years.) The car's proportions belie its size; it's big. The frame is 1950 Packard and the hood is over six feet long. The tremendous height and length of the Duesenberg J DOHC straight 8 dictated the hood rise that passes straight the cowl and windshield, a great design cue I think: it says POWER. I will look for more photos to post, especially of the engine.

Mike Kollins, who passed a few years ago well into his 90s, was an interesting guy. He was a self-trained engineer who worked for Packard, Chrysler, and as an independent consultant, and was a technical official at the Indianapolis Motor Speedway. As a young man he had worked on pit crews at Indy, waaaay back in the day. He also wrote a four-volume history of the American auto industry that was published by the SAE.

Thanks for the link, I'll post that on the Forward Look forum.

The hood rise required by the enormous engine passes straight through the windshield:

Cockpit... the shift lever for the Warner transmission exits from the dash.

Another front view. Man in the hat is Mike Kollins' son. Not a big car guy, he and his sister sold the car at auction to settle the estate. I was worried that the car might even be broken up for its valuable drivetrain, but luckily there are so many people who know the car from Auburn-Cord-Duesenberg Club meetings etc that it is appreciated in its own right. Another car I should have bought when I had the chance.

This thread has covered a lot of territory, largely thanks to McGuire...

But not as much as I'd like to cover in that Duesenberg! What a lovely thing!

The kids must have been mad.

If one is suddently seized by affection for the Carter YH sidedraft carburetor, one place to look for them is in marine applications as they were nearly ubiquitous there in the '50s and '60s, primarily on Detroit V8s adapted to marine use. With sidedraft carburetors and a pancake distributor a nice low engine house cover could be achieved, which could then double as a center island seat.

This is a Gray Marine Fireball engine, usually rated at 220 hp or so in this configuration and available in both standard and reverse-rotation versions for twin engine applications. Friend of mine had a 36' Roamer all-steel cabin cruiser with a pair of these. Based on the first-generation AMC 327 CID V8. There were also a lot of these engines in Century, Lyman, and other wooden pleasure boats of the time... man, those were beautiful things.

This is a Dearborn Marine Interceptor V8, which was based on the 312 CID Ford Y-block engine. And again, a pair of Carter YH sidedrafts. (Ford had no financial interest in Dearborn Marine that I am aware, but I imagine there was probably a people relationship.) This one is hooked up to a conventional angle-reduction vee drive. Can't tell but this looks like a Century installation. Note the wet exhaust manifolds and copper pipes.

And now for something completely different... this is a Dearborn Interceptor with Carter YH in a Dowty jet boat (from Ontario, Canada)... a very early builder of jet drive pleasure boats... in this part of the world, anyway. I understand you down under-ers invented them some years earlier, and I have seen video of you people racing them in slalom courses laid out in mud puddles. Looked absolutely insane to me, must be fun.

Yeah, that twisty mudhole racing looks like it's great fun!

I've never seen it in the flesh, only on TV.

Can I just say something?

Since we're already covering a lot of ground, what's this about mud puddle speedboat racing?

Here's a couple of little clips:

If that track was tarmac, would a car be as fast? They used to show that stuff on Speed TV as well as rallying and V8 Supercars, etc. I don't even watch Speed anymore it is such crap. I watched Bing Crosby and Danny Kaye in White Christmas last night but no swamp racing.

Wow, that is also really, really cool. Thanks for that.

I always reckoned they could be included in a racing 'complex'...

Imagine a race-driver training facility where, after three days of intensive on-circuit and classroom work the boys got a shot at these for a couple of hours?

I have received so many emails over the years, and continue to receive them, regarding a car mentioned above, the Mike Kollins Duesenberg, that is was time to put out a whole story about it. For some reason the car seems to fascinate people. And I sort of get that because it has always fascinated me, too. One man's vision.