76 replies to this topic 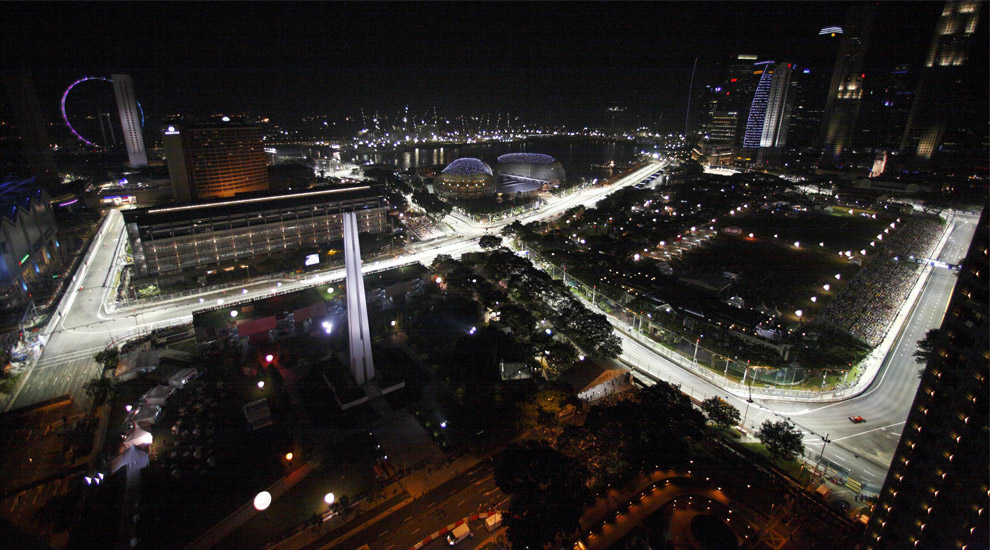 Fernando Alonso of Renault is the only previous winner of the race but recent controversy has surrounded the race. Last year's pole sitter Felipe Massa will sit out the race with injuries sustained in the Hungarian Grand Prix. The previous street circuit races this year were won by Brawn GP with Jenson Button taking the chequered flag in Monaco and Rubens Barrichello victorious in Valencia.

Button leads the Championship by 14 points from team-mate Barrichello. Sebastian Vettel lies 12 points behind the Brawns and is their closest challenger. Kimi Raikkonen of Ferrari is looking for a 5th podium in a row having scored Âľ of his 40 points this season in the last 4 races.
Brawn lead the Constructors' Championship on 146 points, whilst Red Bull are 40.5 behind on 105Â˝. Ferrari and McLaren are 3rd and 4th respectively.

Circuit
Singaporeâ€™s all new street circuit weaves through the Marina Bay area of the city in an anti-clockwise direction. Similar to Monaco in its layout, the 5.067km lap of Singapore is dominated by slow speed corners (24 in total, 14 left and 10 right) and has only a handful of higher speed connecting stretches, the highest of which being Raffles Boulevard on which the drivers reach 190mph. Despite so many braking events, the average lap speed is around the 110mph mark with 50% of the lap spent at full throttle.

Over and above the clear demands provided by a night race, Singaporeâ€™s creative layout brings its own challenge in that four fifths of the track take in the cityâ€™s streets, while the remaining one fifth has been built specifically for the Grand Prix. The combination of cambers and bumps characteristic of a street track and the smooth asphalt of a designated racing circuit can therefore complicate set-up direction over the weekend. With the region notoriously humid, rain is often expected most evenings which further exaggerates the set-up conundrum. source williamsF1

edit: changed massa for liuzzi. (no votes we're casted on massa yet)

McLaren has some great mechanical grip, so I think it is going to be fight between Lewis and Brawn.

It'll be Hamilton against the Brawns again. But this time the front runners should all be on similar strategies. I really don't expect anything from Red Bull.

Have they altered the first complex?

Have they altered the first complex?

Not that I know of, why do you ask this?

Not that I know of, why do you ask this?

I don't think the track suits them but RBR have a large update due.

If a midfield team base their strategy on a morethan probable SC, that could work for them

I don't think the track suits them but RBR have a large update due.

As will almost all the teams.

Brawn are certainly set for their final major update.

Mclaren are also set for some updates, BMW are certainly due for some, the big changes they have been waiting for.

Not too sure on the rest, but since it's the first of the final fly-aways its very logical to think all teams will introduce the final big updates here. Especially since Suzuka is only the next weekend.

Well, that's what happened at Valencia and Monza

IMO Button will win, he is good on street circuits and drove on hell of race here last year, just missing out on the points.

Williams should get a boost being back at a high downforce circuit, they showed well in Valencia before we went to the lower downforce tracks.

Alonso wins after Grosjean crashes and SC is called.

Alonso wins after Grosjean crashes and SC is called.

C'mon, this joke is cheap. Also, I don't think Renault will participate.

Could be quite a few contenders but basing it on the kerbs and the fact that Mac are bringing an update I've gone for Lewis. Nico would be good too, or an RBR. No safety cars please, the jokes would be too painful

Kimi will be in the mix at this circuit. But yes, McLaren will be strong and it seems Brawn has made another push. But I went with Kimi because he's in the zone right now and pulling 100% out of the package.

Brawn have to be favorites, it will be real hot there so their tires are going to work great.

About the poll, Massa is included, Liuzzi isn't.

Brawn have to be favorites, it will be real hot there so their tires are going to work great.

Kimi will be in the mix at this circuit. But yes, McLaren will be strong and it seems Brawn has made another push. But I went with Kimi because he's in the zone right now and pulling 100% out of the package.

I'm going to take a stab at it being Jambo who also voted for Kaz...

C'mon, this joke is cheap. Also, I don't think Renault will participate.

Aww... you're just sore someone else got there first

I'm gonna go for Barichello. He's in great shape, won two of the three last races. I bet Kimi will be on the podium, though.

some 2008 articles on temeprature
http://www.forumula1...pore-challenge/
â€śThe surface temperature of the track will be very low and normally Formula 1 tyres work best in higher temperatures,â€ť said Howett.

http://www.mclaren.c...ore/preview.php
"There is the potential for the temperature to drop, but I suspect it will still be warmer at 21:00 in Singapore than during Friday practice at Monza! We expect the ambient will be around 30 degrees centigrade, the track temperature will cool down for the evening but will still be close to 40 degrees centigrade, unless there is rain. If it rains, there is the unknown of whether there will be a problem with glare or the sparkle of light from droplets of rain that is greater than you would ordinarily get. To manage this potential, we are using coatings for the visors that wonâ€™t allow droplets to collect."

It will be either Rubens or Jenson. Hamilton and Raikonnen will fight out third.

What about fuel consumption?

I put in Sutil, even though it's a far shot, FI came so close twice, I do hope they can pull it off.

I don't think Renault will be in Singapore.

well, it has a lot of tight corners

Button back on top

melbourne is a quicker track with more speedy corners

I think a comparison with Valencia would be the most useful. maybe other circuits are more similar, but car development influence the data too much to be able to draw conclusion from them.

Here the race chart. Red Bull, McLaren and Brawn on the pace. red bull struggling with engines problems and a slowish middle stint from Webber because of tyres (if I remember correctly).

Temperatures will be a lot lower in Singapore, especially track temps. Valencia was in the 45C area, where for Singapore it will be around 30. The red bulls don't convince as of late, they we're supposed to do great at spa but somehow stuffed qualifying and therefore the race. they need a problem free weekend to produce results whereas brawn can turn things around from a bad start. Therefore I believe Brawn will be 1, McLaren 2, Red Bull 3, Ferrari 4. Williams 5.

Looking at the track layout, I think KERS will be very beneficial. However, have already seen how strong Brawn are on street circuits. I still fancy a Brawn to win, but think McLaren and a Ferrari (Kimi) will be up there. RBR, Williams and of course Alonso in the Renault should feature in the top eight in some shape.

IMO, it's more like Hungaroring than anything else.
Lots of slow corner with short bursts of acceleration in between.

Somebody is going to name one corner after Piquet aren't they?


on another note:
anyone found any info on the alleged changes in the first turn(s)?

anyone found any info on the alleged changes in the first turn(s)?

Thanks.
Seems it'll be a more conventional chincane now.

thanks for the images!

Looking at the current poll results, brawn has the most chance of winning (two driver combined 26%)
Red bull only around 6% chance. Faith in webber and vettel has really dropped as of late, did they looses the development race, or did they look good because brawn made mistakes?

Somebody is going to name one corner after Piquet aren't they?

If you interpret the percentage of people who voted for any particular driver as his chances of winning as percieved on this board, it can be multiplied with the odds to give some kind of number of profit.


Best to put you money on Jamie!