Can someone expalin where I am missing something here!!!

yet nearly everywhere you look, the purpose built six wheeler is listed as a FW08B.

Were there two versions of theFW08  six wheeler, and if there was, then why isn't the four wheel version the C and the short sidepod the D?

(Why are you confused in Mayfair ?)

From what I have read, and been told by ex Williams employees, the FW08 was built up as a six wheeler, after the "success" of the converted FW07D in tests. So there wasn't a four wheel version first. Williams had every intention of entering the car, and then the FIA banned six wheelers. So it was "converted" (that is the ex Williams chaps description, designed and built as one thing, converted to a four wheeler) and designated B spec.

Yet all of the models I have seen, and a vast qauntity of books list the six wheeler as a Williams FW08B!!

"Confused of Mayfair" as opposed to "Angry of Mayfair" , the character created by Kenny Everett for his character, who wrote in to agony aunts under that pseudonym. Sorry, an attempt at humour, but in my defense, I do have a stinking cold!!

Ah a nod to Kenny Everett ! Remember it well.

I think what you have said is correct about the timeline, certainly designed as a 6 wheeler - hence the short tall fuel cell - but was it ever run on track as a 6 wheeler before we saw the 4 wheel version? I can't honestly remember.

If not then that would account for why the press designated it as the 'B', if they saw the 4 wheeler first that would be the 'A' version in their eyes, and the error would then go down in history (again). They would not have been aware that it was built up in the workshop as a 6 wheeler before they saw it run.

If my understanding is correct, 'conversion' to a 6 wheeler on the FW07 effectively involved bolting on the twin rear axle assembley on the back of the DFV and removing the conventional single axle. Then a different set of side pods was fitted.

In that case, the conversion that you have described would be to fit the FW07 rear end. That probably explains why the first car appeared to have an FW07 rocker rear end fitted, when you might have expected something matching the pullrod front.

If anyone who was there can correct that please do, i'm just going from observation of the different versions.

Incidentally the press made a similar error in trying to sort out the Lotus 87's and 88's, which i was able to do some research on, up here in darkest Naarfuk, but thats another story...

The six wheeler project at Williams was delayed right from the start with the FW07. During 1981 one chassis (FW07/16) was modified to the FW07D specs but had to be hastily modified to four wheel spec as it was needed for racing at the German GP. Only at the end of the season was a FW07D completed. Of course Alan Jones tested the second FW07D and walked away unimpressed (of the weather). The car performed!

The FW08 was shown to the press before the 1982 Brazilian GP at tests at Brands Hatch. Then already converted back to four wheels. This as wind tunnel results proved that the four wheel version was hopeful and likely Patrick Head wanted to test further on the concept. It was presented with as a side note the intention to be (possibly converted to) a six wheeler. Hence the short and stumpy appearance.

Williams raced FW08 chassis 1, 3 and 4 from Belgium as 2 was still used for testing (as six wheeler?).

A second iteration of the FW08 six wheeler was rolled out and shown with Laffite at the wheel, looking forward to the 1983 season. It was a second re-iteration according to Dernie. It was dubbed in the press as FW08B as it was out in the open and following the four wheel car. However it was finally banned as 4WD was forbidden, not six wheelers!

Mistakes found in the press: FW07D as raced by Reutemann, Andretti and Rosberg, FW08D being the six wheeler and of course the 1982 world champion being the FW08B.

Why are all three 6 wheelers each an anomaly in their constructors' model numbering systems?  Williams as above, Tyrrell with the P34. March with the 2-4-0? 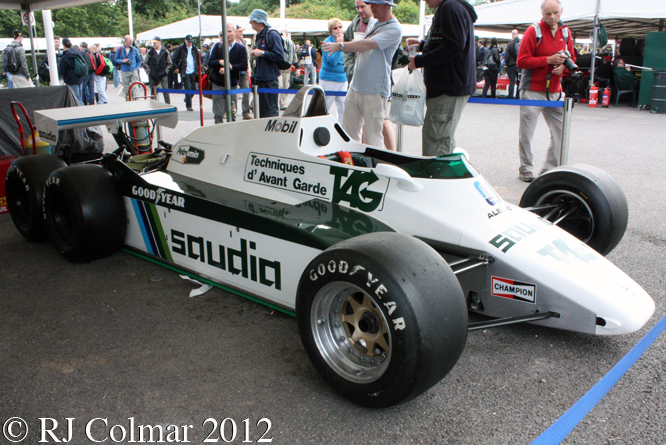 The reason I ask is because I read a comment by Frank Dernie on his fb page which makes me wonder just how serious Williams were about ever running the six wheeler from the start of its introduction  into the 1982 championship ... 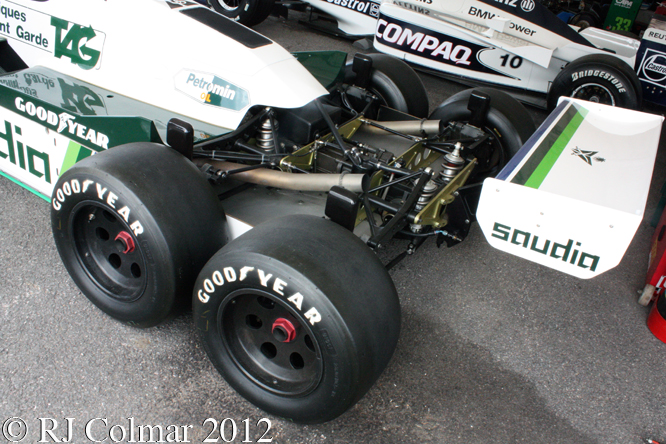 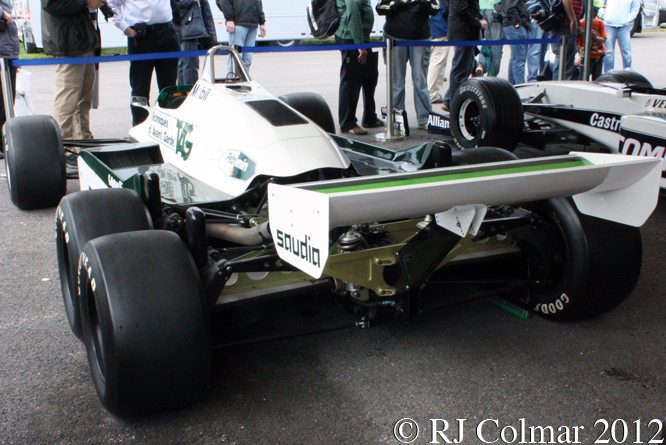 .... since, back then, the limit on what you could do was money not imagination and we only ever built one gearbox."

Does having only one 4wd gearbox, so close to the start of the 1982 season, not rather suggests that Williams planned to run the FW08 in four wheel form from its introduction into the 1982 championship, before introducing the six wheel version FW08B at a later date ?