15 replies to this topic

In the past there were numerous discussions about the colour of the first Mercedes silver arrow.

Was it white or was it silver when it was presented for the first time during a race?

I don’t think it is necessary to discuss this any further. Most of us now know/believe that the white Mercedes story was a fudge.

What we do know is that the prototypes could have been white.

​But how about the Auto Union's?

For instant this picture of an Auto-Union P-wagen prototype from 1933.

It looks a lot like the later long-tail P-wagens from 1934 but it is clear that there was still a lot work done before its first appearance at its record attempts in march at the AVUS in 1934.

Overall it looks a little ruff and not or even less refined as the first P-wagens that came in action in 1934.

Aldo it has a nice policed nose.

What I find intriguing is that It appears to be a white car (apart from the nose).

The rims are almost certainly white and the colour of the rest of the car matches the rims.

What is your opinion on this car?

Was there an white Auto Union?

And if it was indeed white. Why did they change it to silver? The car does not look white to me. The radiator shell is polished/chrome/nickel plated, that's why it looks different to the rest of the bodywork, which looks like unfinished (i.e. unpainted) metal/aluminium. It's always dangerous to judge colour from old b&w photographs! A little overexposure will turn silver into white.

I agree with Michael. Also, the car in the photo has two scoops on the engine cover to feed air into the engine compartment. All photos I’ve seen of the early prototypes show that they didn’t have those scoops, but had a series of louvres in the engine cover instead. Certainly, in Stuck’s record runs at Avus in March 1934 the car had louvres, not scoops, whilst the cars raced at Avus in May had the scoops. This suggests to me that the photo was taken sometime after March 1934.

Me three. I'd go with both Michael's and Tim's analyses.

Interested in the people though. Obviously Herr Doktor Porsche in the homburg and fur-collared coat. Pretty sure that's Willy Walb next to him. At a guess Wilhelm Sebastian with his head in the engine compartment. Could the chap in the jaunty flat cap be zu Leiningen?

Make it four. That is not a white Auto-Union Typ 1934. As correctly pointed out, unless one has seen and examined literally hundreds & hundreds or more of such photographs, one can be easily led down the garden path to myth-making....

Thank you for the quick replies

Maybe I wanted to believe it to much

With your inmput and looking at the picture again I am now convinced it is not a white car.

And it also seemst to be later than I thought because of the hood scoops.

So now I have new questions.

When and were was this picture taken?

and why did it have a polished nose?

I agree with Michael. Also, the car in the photo has two scoops on the engine cover to feed air into the engine compartment. All photos I’ve seen of the early prototypes show that they didn’t have those scoops, but had a series of louvres in the engine cover instead. Certainly, in Stuck’s record runs at Avus in March 1934 the car had louvres, not scoops, whilst the cars raced at Avus in May had the scoops. This suggests to me that the photo was taken sometime after March 1934.

November 18, 1933 was quoted for this series of photos. At least one of them was published in ADAC Motorwelt magazine on January 26, 1934. So definitely before March. 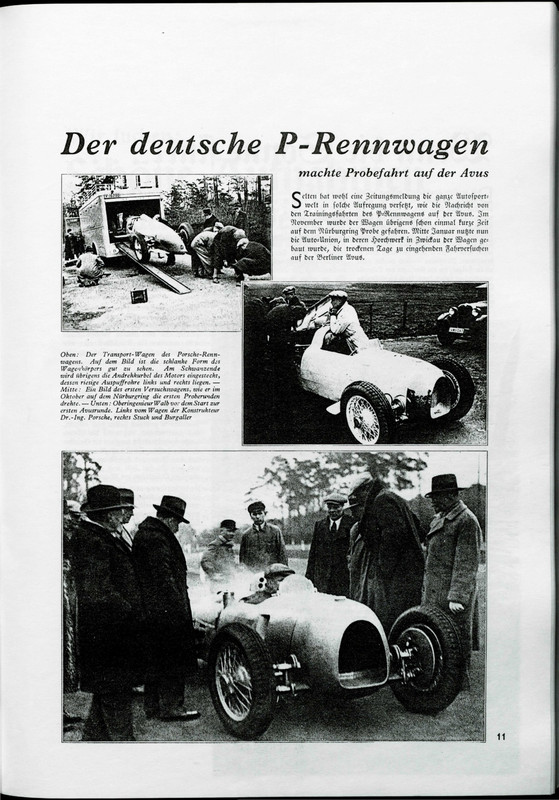 Thanks for those, Vladimir. Pictures of the October/November tests on the Sudschleife are very scarce, although I have seen a few more. I also think they may have been embargoed until January; I've found a copy of the picture above with the date January 15th 1934 attached in a caption - three days after the AVUS launch and test runs. I wonder if they may even have tried both the air scoops and the louvres during those early tests at the Nürburgring. At the AVUS launch the car had louvres, as did the one Stuck used at Monza; maybe those sessions threw up 'breathing problems' or overheating and they then decided to use the scoops instead?

Also take a look at the little "wings" behind the front wheels. Present there at the AVUS record runs, but not 2 days later at the Berlin Motorshow. I can't find them at any races, but at the Klausenpass in August, they are present again.

Those little "wings" were essentially a form of "mudguards", restricting the amount of spray thrown up by the front wheels. I don't think they were part of the overall design, just an extra feature that was added in rainy weather.

Some years ago I try to write down all info about arrows in my native language and then, I defenetely found info, that prototype car was white. I will try to check those materials and sources.

In Avus 1934 pic, car looks normal, not white - look at the car in right side - that seems white

This is probably Monza test car (note D for abroad).

So, now we just need two pieces of evidence to be resolved:

- footage on youtube showing the AU car being transferred from white to silver (some of the pictures, e.g. the wheels appear to be white on the b/w pics)

My apologies if this reply is not based on any expertise, or to be taken very seriously

Found a (bad) picture of the polished nose Auto Union in my files.

Is should also be from the Nürburgring test in november 1933. 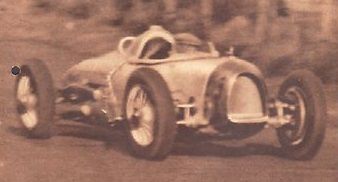 Interesting, and what do you make of the hose or pipe running round the cockpit and down the side?

I think the hose has something to do with the cooling.

Maybe the sprung a leak and had to bypass it.

Weren't there two tanks in front. One for the radiator cooling and one for oil?