I am getting closer to commencing the machining work on my Norman-blown Holden grey project. The next step is to get the block bored out and sleeved, which will mean having to choose a block (I am fortunate to have a couple to choose from). The question is, which block to choose?

According to legend, the later blocks are the better choice as they have had less time to internally corrode than the early blocks. Probably made sense in 1970, but after fifty years I'm figuring even the later blocks will have corroded a fair bit. I reckon that by now the date of casting has way less impact on corrosion, and the main issue limiting corrosion would be how the block was used or stored. Block usage/storage is a crap-shoot - no way of knowing how most blocks have been treated over the last half century.

One thing that does stand out though (from reading some material that Ray put together a fair while ago) is that at some stage GMH made a change to the oiling design. The earlier blocks had no oil directed to the area where the dizzy and cam gears mesh. This can lead to dizzy gear wear. Apparently GMH began casting (perhaps drilling) a hole in the cam bearing supply that directed oil to the area. I figure it would be a good feature to have, though apparently it is able to be done to earlier blocks by drilling a fine hole.

Does anyone know when GMH started this change to the grey motor oiling?

Are there any records (Accelerator, Service Bulletin, Workshop Manual etc) that documents the change?

How do you tell if the change was made to a given block?

How is the DIY version done - hole size, location, angle?

The other consideration is that from the FB onwards they had a slightly larger bore, so possibly the castings had more meat around the bores?

I will ask Ray Eldershaw about that oil hole for you.

I've always wondered whether GMH increased the FB's bore by modifying the casting (larger diameter bore but same wall thickness), or whether they did it by using the same casting but machining more (larger bore diameter but thinner wall thickness). I suspect the latter, as there are no rumours floating around of "you can bore an FB block more than a FJ block before hitting water". It would be an interesting question for a machinist, though sadly there are less of them around who have bored hundreds of grey blocks.

Speaking to Ray Eldershaw yesterday, he assured me that it was only the EJ's engines which had the oil squirter on the oil pump drive...

"We used to tap into the oil gallery and screw in a small copper pipe," he said, "and direct that at the gears."

Here are pics of the blocks with lesser and more ribbing: 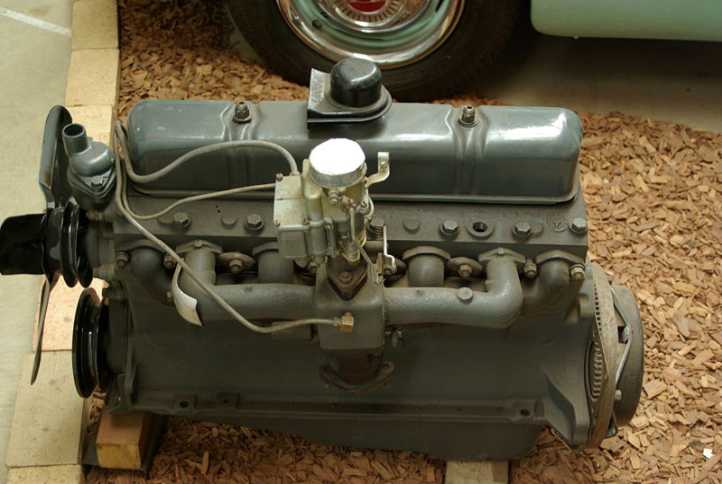 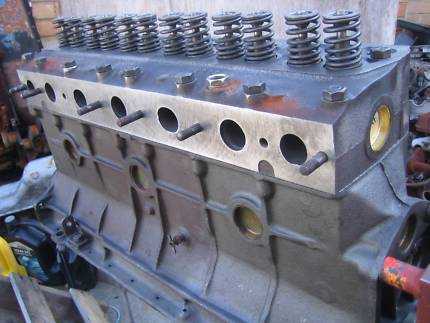 Ray told how he picked up a block once and it was easily heavier than the others he had. It was bored to 3¼" plus 0.040", the machinist said it might not take it but was pleasantly surprised that the block had plenty of material where it was needed for boring to that size.

Many thanks Ray - appreciated. Some chasing via the early Holden forums suggests that the change first started appearing in GMH literature (The Accelerator) in August 1961: http://www.ejehforum...php?f=4&t=11807. Perhaps some of the EK blocks have the dizzy squirter oil hole too.

Good news though that the 138ci blocks are bigger.

Cheers, and thanks,
Harv

I had an EK ute, which cost me $170. I used it and repaired it for 19 years.   The only trouble I had with engine gears was due to the reinforced bakelite camshaft gear ;  for which I fitted new replacements.   If you had everything you needed, it was possible to fit a new gear if you lost timing on the road.  This did happen to me once when I urgently needed to be elsewhere.   Completion time was quicker than I could have achieved in my own workshop,     just 45 minutes.      The material was used for camshaft gears ,even perhaps before 1920, by Rutenber,   by Continental, and  Rochester-Trego in the Mercer Six in the early 1920s.   I even have a new spiral bevel camshaft gear for A model Duesenberg , but I would never use it.    The engine oiling improvement that I found most useful  was diverting the oilpump delivery though a full  flow filter mounted externally; then back into the main oil gallery.  This gave me better service life.

I have not heard from you for a long time, Ray

The only trouble I had with engine gears was due to the reinforced bakelite camshaft gear ; for which I fitted new replacements.


You have never really owned a grey motor unless you have been stuck somewhere due to the dreaded fibre timing gear 😕. Did my first one in 40+oC heat, four kids and a fully laden trailer. The kids learnt a few new words that day.

Toymotor used the same type of gear on the early Coronas...

I recall once Bob Abberfield had one go and he was a Amaroo. Everyone wanted to help and Lionel Lawson told us he knew the quick way. And started into it with a cold chisel. "We do this with Holdens all the time!" he explained.

The look on his face as the gear fell off complete with the nose of the cam was priceless.

Ivan, good to know you're still enjoying yourself. I haven't been down that way for a very long time now.

I am still pretty slow typing on the computer, since I was enveloped by the electromagnetic field of a ball lightning strike when I was just under the eaves of my house at the beginning of January.   Everything went pale yellow, then, with the loudest thunderclap I have ever heard ,I saw like a brilliant shining rapier, the lightning strike the TV antenna on the far end of the roof.  My joints were stiff, I was lethargic,  and my access to mental file of vocabulary was most impaired.         John Medley found account of a single car crash between Armidale and Kempsey long, long ago.    The local newspaper gave the name of the people on whose property the car ran off the road and same to rest upside down.   John rang the number that was in the phone book.  When he outlined his interest, the man said that he  " should speak to his mother".   She was as sharp as a tack, and well into her nineties.   The lady said that she had walked to the scene of the accident the morning after; and her mother had photographed the wreckage from the road above.   "Would John  like to have the photographs?"     You can best get the story more complete and accurate from John Medley himself.  If you turn back to the chapter of Porsche in Barker and Harding's most excellent book,   "Automobile Design:  Great Designers and Their Work" , you will remember that Herr Porsche could use very blunt language if he was annoyed.  He would not have been delighted if he could have known that the chain drive chassis of one of his early Austro-Daimler masterpieces would be misrepresented and altered to re-create a very different early racing car.   In summary, a quotation borrowed from L.J.K. Setright's book  "The Power To Fly";  ----  "In The Land of the Blind, The One-eyed Man is King".

Incidentally , I fitted a Mercedes ( 180 or 190) diesel engine out of a 2 ton van into the EK Holden ute for better economy,  and it gave about 36 miles per gallon.  Today I would give it a light sniff of LPG in the intake air.  This improves the combustion of fuel in a diesel, and cleans up most of the unburned nasties in the exhaust.

I'll send you an email so we can talk when convenient of matters that may need that.

I look forward to that, Ivan...

And I'm sorry to hear about your lightning altercation.

Having seen several rusted out blocks it is  a serious consideration. Does not matter what brand. A friend had a 313 Chrysler to be bored to 318. Had the block sonic tested and was all ok. First time out it was using weater, heads off and a pinhole in a bore. So sleeved reassembled and another one strtated spraying. This engine was out of a boat. He found another block that had been on coolant all its life. Looked new inside when tanked. And 16 years later still in service,, and still on coolant.

I sent what was a running 302W  to be bored 030. Lucky they bored it Friday and was left all weekend to be final honed. On Monday morning it was showing rust marks in the bottom of the cylinders. So that became scrap. had another block that was so ridged it would not bore 030. Found a import 5 litre truck block that was really a pity to be bored but that was A1 when bored.

Quite a few HQ engines too struck water, even at 040.

So try and find one that is not full of rust and you should be fine. Though there is the problem!     FB on blocks go 3 1/8 if not rusty. But play it safe and do not go any further.

And one of those pics show an engine with brass welch plugs. They cause dramas, use the original cad plate ones,, though maybe use a brass on in the back of the head unless the firewall is already pre butchered!

Decades ago my father bought a  new 4 cyl Perkins for the Front End Loader. And changed all the cad plugs to brass. About 150 hours in it corroded out a sleeve. He got the big talking too about the reasons for cad plugs, especially when solidly mounted cause all sorts of problems.  The are in effect a sacrificial annode. And the reason manufacturers use them. So the electrolysis does not eat the iron.

And every engine I have since built uses cad plugs for said reasons.

You have never really owned a grey motor unless you have been stuck somewhere due to the dreaded fibre timing gear . Did my first one in 40+oC heat, four kids and a fully laden trailer. The kids learnt a few new words that day.

Touch wood I have never stripped one. Closest was a broken timing chain in my Galaxie,, and that was a near new premium chain.

Lucky I had a big trailer and another a Landcruiser to tow it home.

And had a Ford 302 nylon cam gear strip as I started the engine in the shed. Lucky I had other cars to drive!

I have however always replaced said genuine item with alloy gears or with chains true roller chains. Hence the Galaxie was very annoying as I had used all premium parts.

Though the alloy gears for red or grey Holdens seem to be junk these days as they come loose on the steel hub. In the distant past replace a cam, press the gear off and put it on the new cam. HQs which are hardly true performance engines allowed the straight cut steel gears as so many alloy gears were failing. I have used them for 30 years, more for multi keyways to get the cam timing correct but once you get them sorted out they are bullet proof. However,,,,, I check everything and have had them so tight on the crank as too not fitting or offcentre where you have too much backlash on one side and none the other. Too tight is the heat treating and offcentre is poor manufacture. And send them back which in turn puts the build well back. And this with so called premium parts. Grrrr!