There was an auction that finished yesterday (Sunday)

Mostly it was memorabilia but two cars noted:

Lot 33 BWA historic race car. Did not sell. Has a very interesting history

Lot 39 Brabham BT 16. Did not sell. This car has been on the market for some time. Years ago Classic Throttle Shop in Sydney was trying unsuccessfully to sell it.

After the Tasman Series Alec Mildren offered his driver Kevin Bartlett the choice of his existing BT11A or this BT 16. After testing Bartlett rejected the BT 16 as he reckoned the handing of the BT 11A was far better.

There are different versions of what 'BWA' stands for.

ANOTHER Aussie Auction, with one day to go

With or without the Weissman rear end?

The description's a bit light on for detail...

With or without the Weissman rear end?The description's a bit light on for detail...

Also in the Monaro...

Phil Ward used it too.

Also in the Monaro...

Phil Ward used it too.

At that point in the car's life it was a sports sedan not a touring car.

In Australian Muscle Car mag issue #41 there was a very detailed 21 page article on this Monaro covering its history and restoration.

It went awry on Bob at an Oran Park meeting once, I remember him saying it took an Einstein to understand how it worked. He'd lose drive and then it would come back again, I don't remember which race or the results.

Also in the Monaro...Phil Ward used it too.


Ray, the Bob Jan and Phil Ward Monaco’s were one and the same.

Phil used it too because he bought the car with it in.

It's strange, the rear axle in that car was the regular axle with rose-jointed arms taking the place of the rubber-bushed arms. The floor of that car must have been absolutely tortured.

Phil used it too because he bought the car with it in.

It's strange, the rear axle in that car was the regular axle with rose-jointed arms taking the place of the rubber-bushed arms. The floor of that car must have been absolutely tortured.

HQs pull the left lower trailing arm brackets out of the floor. I have seen a few instances, all 350 engined cars,, and one 202 engined racecar.

The car though was quite modified as a Sports Sedan and I suspect that area was strengthened or fabricated.

As Myles our disapeared Bob Jane repairer said the shell was carried across the workshop after being modded.

I raced against it a few times with Tino Leo driving it and I always thought it was heavy,, but really did not pay much attention to it.

And it still looked original.

And it still looked original.

Dont know. Front chassis was modified factory and the engine was back to the crossmember.

Gearbox from memory had steel plates both ends. That when broken at Sandown maybe 97

Over 20 years since Tino raced it, at times it was quite quick.

I've only been discussing the rear suspension, Lee...

No comments about the front, though I thought the engine was in its original spot (or close to it) when Phil owned the car.

Engine was back probably a foot to 15".

Lower arms may well have been in the original position though I doubt the top ones were.

His incites into that operation were entertaining.

I'm talking only about when Phil had the car...

The rear axle pickups were all, that is all, in the original positions.

I'm talking only about when Phil had the car...

The rear axle pickups were all, that is all, in the original positions.

Bob Jane had the car before Ward,, an what Tino and others have said it was not much changed in those years until the Walls reverted it back to a Touring Car. Even the Touring car regs allowed change I feel, too long ago for this young bloke!!

Sports Sedan regs never dictated suspension pick up points. And not even the engine setback,, does the Corvair ring a bell!

Yes it was clarified in the 90s to max set back the centre of the wheelbase and no front drivers to rear drive though that went a long while ago. 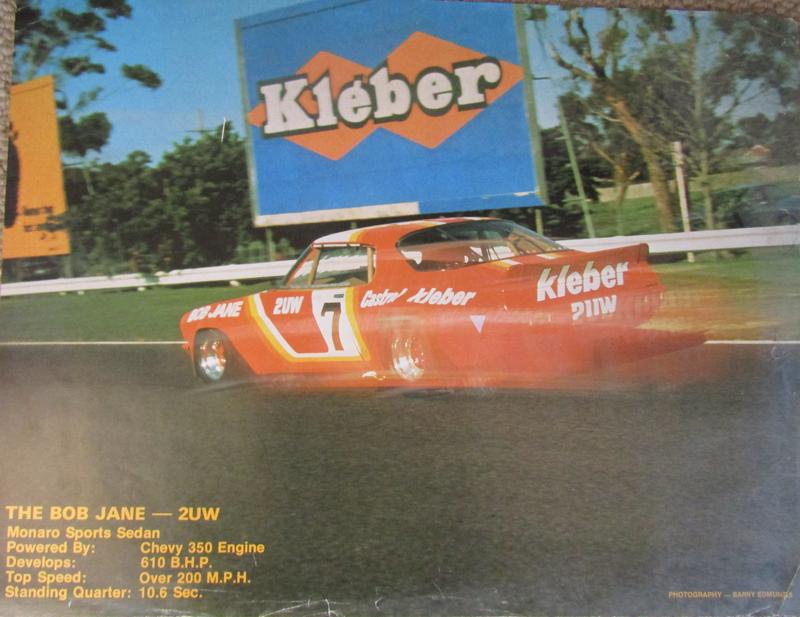 I watched some doorslammer  drag racing from Willowbank in June and a sideline was Chaz Mostert racing Ben Brays Landcruiser g powered [yes] pro stock cars as a demo. The Thupercar was from memory low 11 sec,, with supposedly 600+ ponys.

Makes the Jane Monaro look fast 45 years ago! And it only had a 4 speed H pattern gearbox.

The engine was well back. I just spoke to Phil and he reckons at least 15 to 18".

So my memory must be failing me a bit there.

Pat Purcell was Jane's mechanic on the Monaro in the mid 1970's.

He says that when converted from Improved Production to Sports Sedan specs at the end of 1976, Jane wanted better weight distribution and less weight.

With fibreglass bonnet and guards, and much other attention to detail, they managed to lose 300 pounds

Jane did not want the engine moved back next to him like other top sports sedans of the period. He thought it too dangerous, and it made the cabin too narrow.

The back of the engine was moved back about two feet (600mm) in total.

Before the changes about 60% of the weight was on the front. After the changes it was reduced to 55%