Can anyone help with this one please?

I am currently building a model of the 1974?? British Touring Car Alfa Romeo 16000 car as driven by Tony Dron & Stan Clark.

The car is black with gold Penthouse sponsorship.

I only have a front view photograph to work from.

Does anyone have any photos of either car during the 1974 race season please? 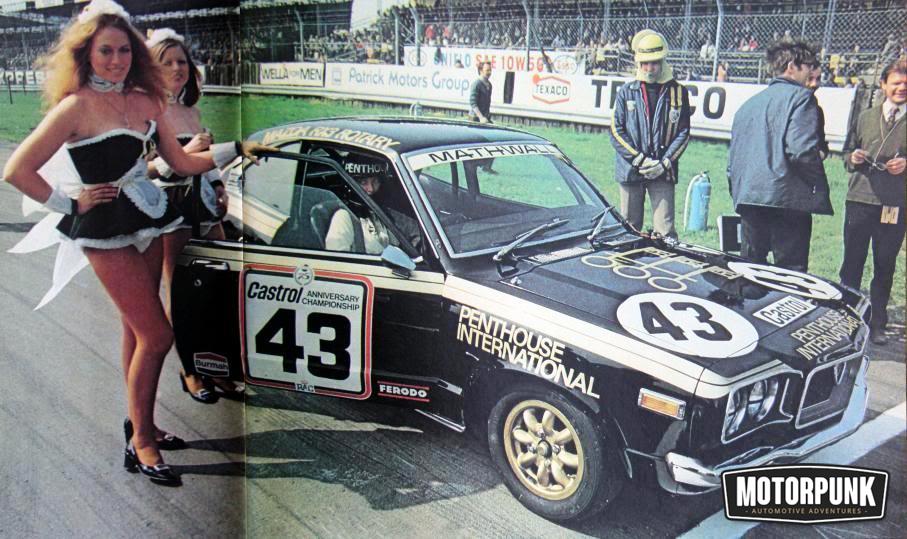 Can anyone help with this one please?

I am currently building a model of the 1974?? British Touring Car Alfa Romeo 16000 car as driven by Tony Dron & Stan Clark.

The car is black with gold Penthouse sponsorship.

I only have a front view photograph to work from.

Does anyone have any photos of either car during the 1974 race season please?

Chris, Richard's Mazda / Wendy Markey photo is from 1974, and I think the Penthouse Alfas raced in 1975. But were they black like the Mazda, or primarily red?

Yes the Penthouse Alfa Romeo 1600 is black with gold stripes and lettering.

Must admit I never saw the car in the photo above….

The Alfa certainly has that graphic on the bonnet & the Penthouse International is a very likely.

The door plates are just like the previous years, just need to change the number

As John says, the Penthouse Alfas raced in 1975, not 1974. At least one car, usually two, raced at most of the BSCC rounds (not BTCC yet) that year. Results available on Frank de Jong’s site:

There’s a photo of one of the cars at the 1975 Race of Champions meeting in Johnny Tipler’s Alfa Giulia book:

Well this is the first photo of the side of the Penthouse Alfa we have found and its with great relief that there appears to be very few stickers.

A project that started out as a repaint and a gold stripe added, might actually get completed properly, so thanks so far

Are there any more photos out there to be shared?

Pete Taylor has a photo of the rear of the car posted on the 'Whatever Happened To The Gold Cup Oulton Park' fb page ;-)

Thanks, found the link and the photo adding more information to be able to complete this model.

I don’t think this will help Chris very much, but here are a couple of snow-covered Alfas in the Oulton Park paddock at the Easter 1975 meeting, in Peter McFadyen’s Oulton Park book:

Wonderful photo of the Alfa in the snow and its the very car 64 I am doing for Stan Clark.

I feel a diorama coming on...…..where did I put the spray on snow?

Thanks, found the link and the photo adding more information to be able to complete this model.

I'll have a look to see if I took any more that day/season. Got my photo-storage "department" in bits at the moment; suddenly filled up the 2tB drives, so I'm copying over 200k+ files to 5tB drives.

Every driver deserves just such a pit crew.

Hopefully you might turn up a few more of the Penthouse Alfa from your database.

There are very few photos around on the internet and Stan doesn't have anything.

What is with those ugly mirrors on an otherwise pretty car. Japanese cars yes but an Alfa?

What is with those ugly mirrors on an otherwise pretty car. Japanese cars yes but an Alfa?

All sporty cars had that sort of mirror in those days.  It was a badge of sportiness.

Provided I don't see myself, of course.

Very easy to be distracted by the foreground, but what about the guy in the background ?

This was the era that welcomed the dawn of enhanced safety in motorsport, Griffin helmets with frangible bolts, twin window helmets, bibs and plumbed-in oxygen (not a brilliant idea), layers of chicken wire catch fencing/poles ready to bash you on the head and tin foil clad fire marshals with Ned Kelly head gear.

So our friend behind the Mazda ?  Impressive fireman's helmet, balaclava and fireproof gloves but the T-shirt, rally jacket and trousers look suspiciously flammable.

Incidentally Penthouse was also associated with TVR at the time (those of a certain age may remember a certain Maria Whittaker), three years later the Penthouse Rizla team gave us Rupert Keegan and the Hesketh 308E , not the most competitive F1 car or team but a memorable livery.

Incidentally Lee Nicolle - "ugly" mirrors - how dare you ?!?   Back in the 70's "Sebring" mirrors were a must-have. As a student in London in '76 the first thing that I did after "borrowing" my mother's Hillman Imp was to drill a couple of holes in the drivers door and add a Sebring mirror. The Cibies, dash-mounted rev counter, negative camber kit, buttoned Corbeau seat and propped-open Abarth style engine lid came later. No one had to know about the stock engine packing 50 bhp or thereabouts.  Nearly half a century later my rally Fulvia HF (see avatar) features a pair of Cibies and Sebring mirrors..plus ca change...

Final observation - sponsorship on Stan Clark's Alfa.  Southern Organs was Sydney Miller's gift to the UK motor sport world in the mid 70's. Several threads on this site will testify as to how this adventure, ahem, did not turn out well. Conversely Irvine Sellar's "Mates" shop in Carnaby Street was a massive success and he went on to become an accomplished property developer - he was the mastermind behind the "Shard" in London.