31 replies to this topic

On the 28 September 1980 Alan Jones accumulated an unassailable points tally at the Canadian GP to be WDC.

Although he did some successful earlier Go-Karting his first circuit racing was in a Mini about 1964. He and his father, Stan, reportedly purchased the car from a repossession yard. The engine was in bits and later assembled by a well known tuner, Brian Sampson. 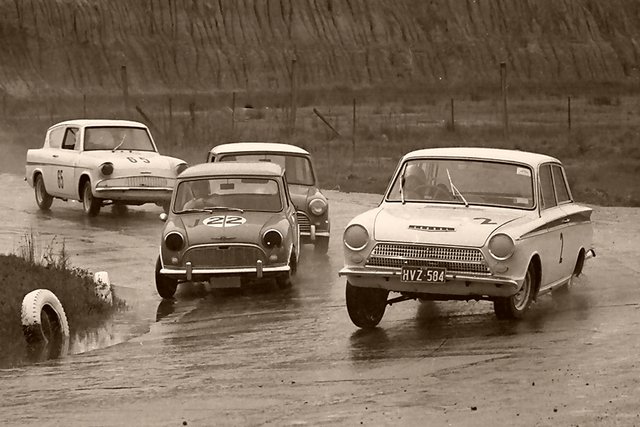 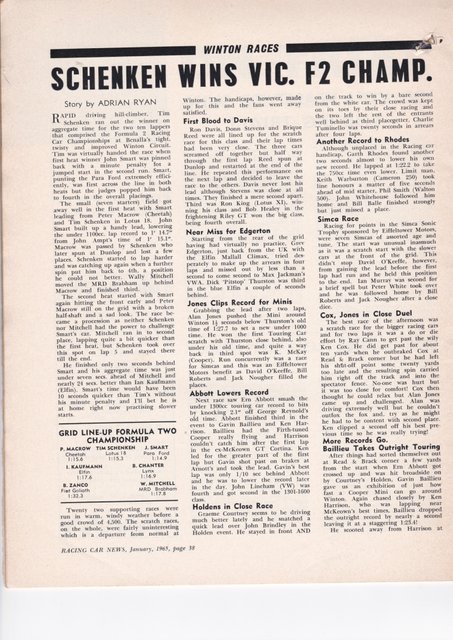 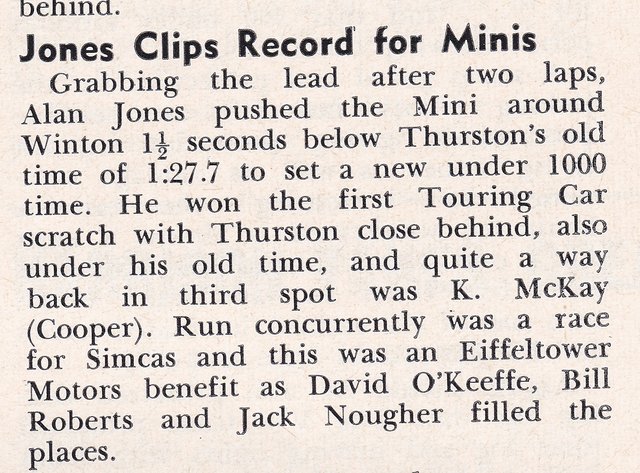 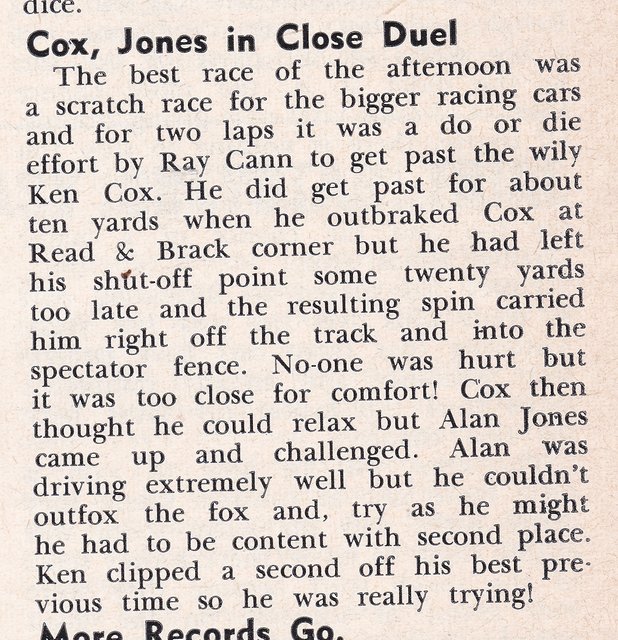 Ken Harrison is leading Alan, probably Gavin Baillieu in the next Mini and Brian Sampson in the Anglia Super. Harrison won from Sampson and Baillieu. Ron Grose had an early lead but Spun in Scrub and this is how the order in the photo evolved.

The Winton meeting was some time at the end of 1964, I don't have a calendar for that nor is it mentioned in previous reports.

Later, of course, Alan got into an ANF2 Brabham. 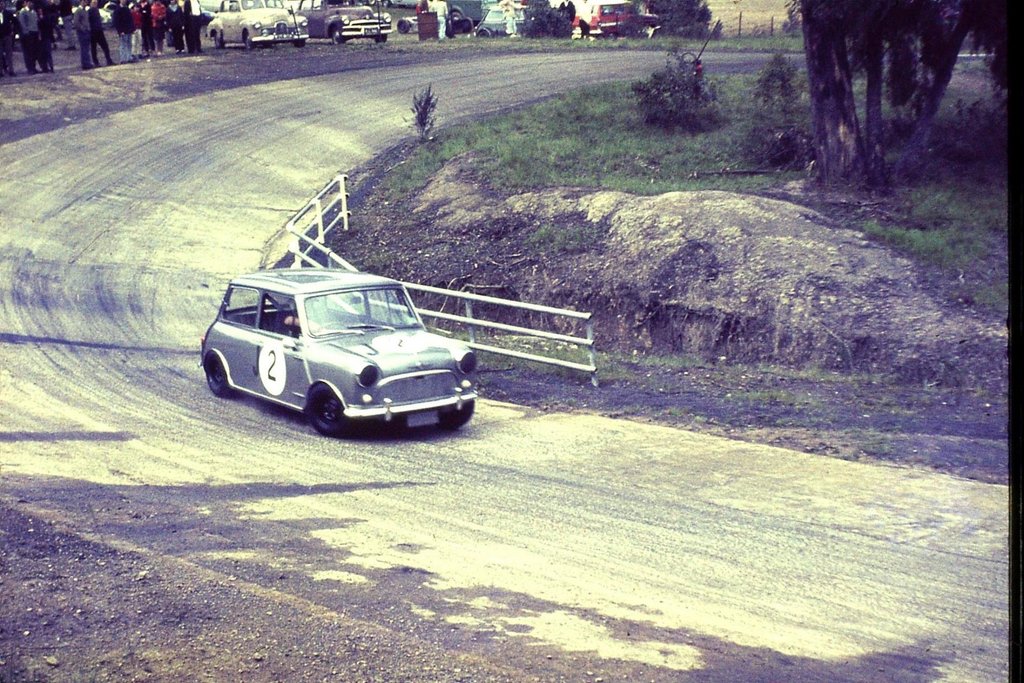 Peter, the bits I don’t get is what Karting he did and what title he won, I couldn’t find it (proof) 4 months or so ago. Maybe Stephen can tell us which of Stan’s T51s he raced, and how often? Sandown Taxi race in 1968 his last before going to the UK? More questions than answers, as usual!

Great posts. I'm not an Aussie or Kiwi but I really wish there were more of both in modern F1.

Alan may well squash a Mini these days.

Though he was always a big bloke but is a deal rounder these days.

Forty years, Wow. Hard to believe, perhaps a mostly-working memory shortens if not distorts time in such cases.

I first knew of Alan when meeting him as a kid reporter at 15, at the US F5000 season opener at Pocono. Alan was teamed up with Bruce Allison in Teddy Yip F5000 Lolas (Alan in a T332, and then 22 year-old Allison in a T330) and they sat at the table next to me for lunch — and of course I couldn’t help but engage them both.

Having known nothing of Alan prior, somehow he emitted that aura of future greatness. You could just feel it on him.

There's a very enjoyable Beyond The Grid podcast with Alan Jones . Being half Aussie myself , I have always had an affinity for him and he doesn't disappoint. If profanities bother you , perhaps best to avoid. though. He doesn't hold back,

My favourite Jones' memory is watching him at the Devils Elbow at Mallory Park in 1975 , howling by at very close range in the light blue March 75A , its Cosworth GA V6 sounding just glorious . Sponsored by Thursdays I think ? I think  they were a louche 'gentleman's club ', or something equally tacky?

Sponsored by Thursdays I think ? I think they were a louche 'gentleman's club ', or something equally tacky?


I thought it was more of a trendy disco/nightclub, in Kensington. It got a mention in the NME Guide to Rock & Roll London 1978. TNFer MCS once admitted to having gone there - perhaps he can tell us more.

Do we know who put the money up for Jones to race the GTS ? As by that time Stan's business empire had long gone. 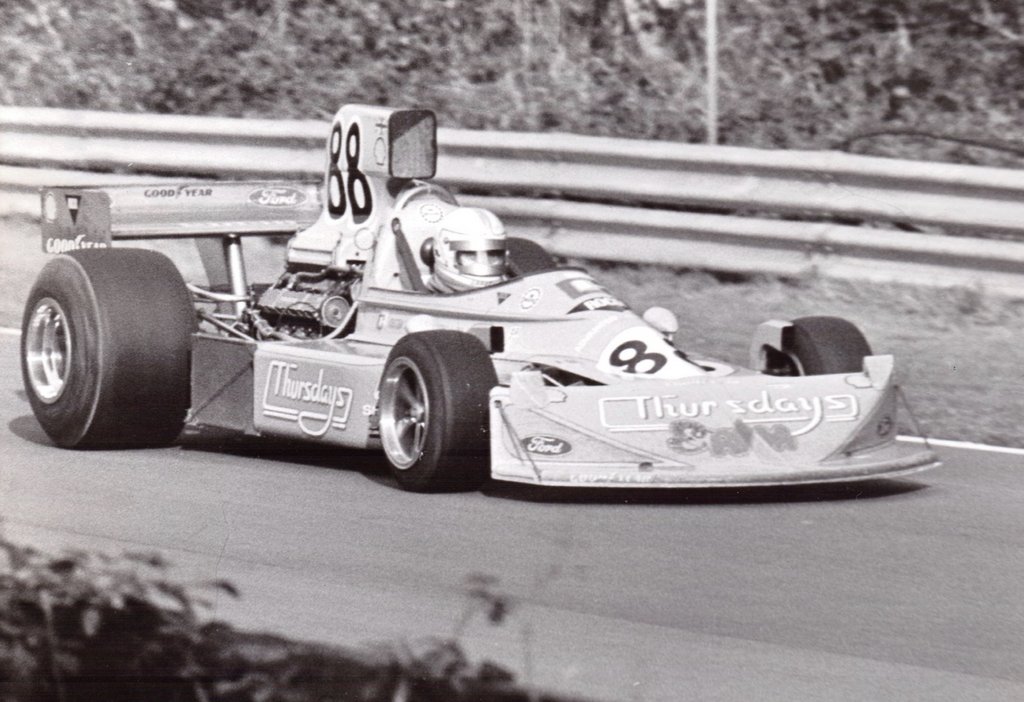 Sorry to be naughty coz we are focused on early career but Tim and John raised the March 75A Ford GAA V6- here on the way to a Shellsport round win @ Brands in August 1975 (John Pease)...

Alan may well squash a Mini these days.

Though he was always a big bloke but is a deal rounder these days.

Actually he has trimmed down quite a bit in the last couple of years. He looks quite a bit older but in good health.

Still only 22 at that stage and with just one year in the UK. Someone was impressed?

About two months shy of 22. 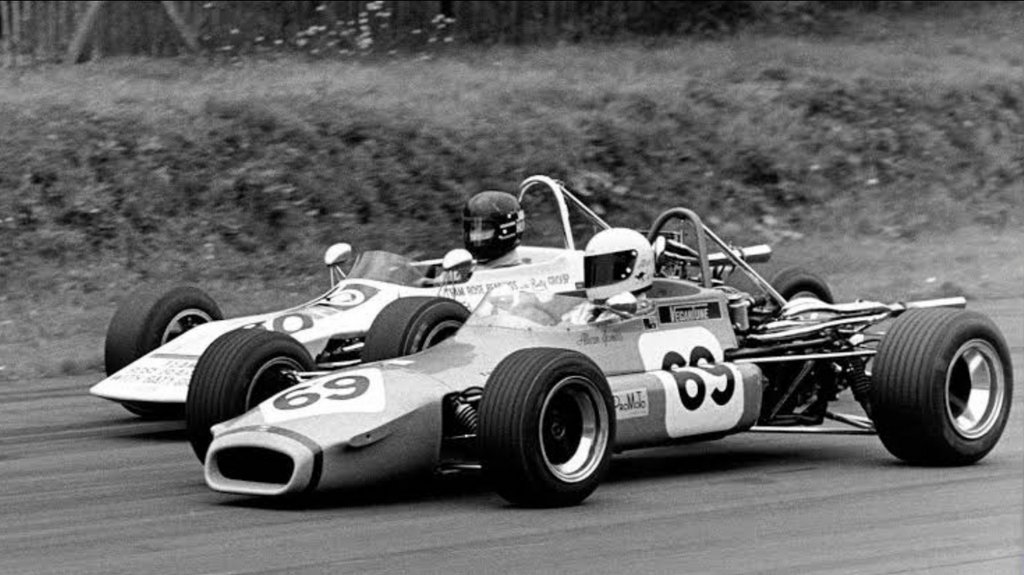 Struggling to find any more shots of Jones’ early career in Australia.
This one is of Hunt and Jones F3 duelling at Brands Hatch, probably on 1 March 1971. James in a March 713S and Alan a Brabham BT28. F2 Index does not record AJ using #69 at all that year mind you (Grand Prix Photos)

"...At seven he was a go-kart champion he held the Victorian title six times..."
https://trove.nla.go...rm=jones gokart

Nothing official, but who would question the person making the claim

"...At seven he was a go-kart champion he held the Victorian title six times..."
https://trove.nla.go...rm=jones gokart

Nothing official, but who would question the person making the claim

Jones was and is a friend of Allan Eaton (big band  sound) My understanding is Eatons father and another bought Go Karting to Australia ? Which would explain Jones racing  them ?

Although I'm aware that Alan gets a mention in the Spotlight page of the July 1960 AMS, the September AMS could be the first time he had his photo published in a magazine.

The Mobilgas oil drum suggests a press photo. The 2.2 Cooper Stan is seated in would become the car Alan ran in late 1964 at the likes of Calder and Winton (as reported in Wirra's opening post). 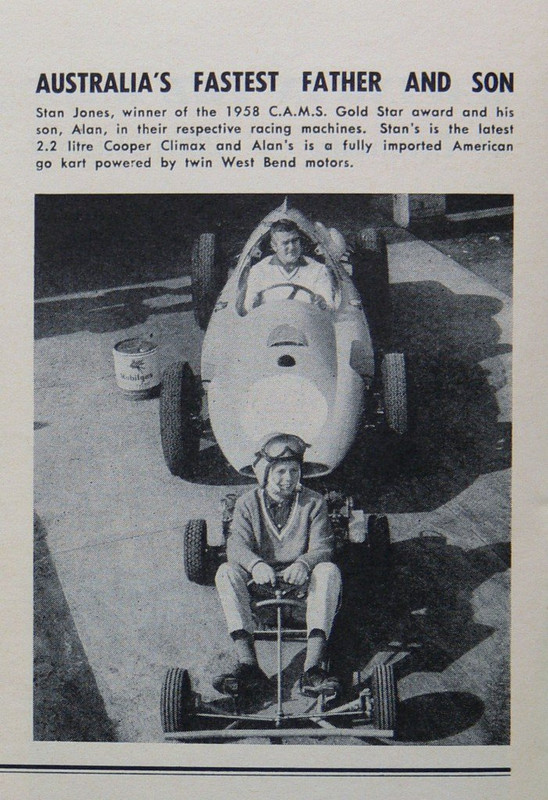 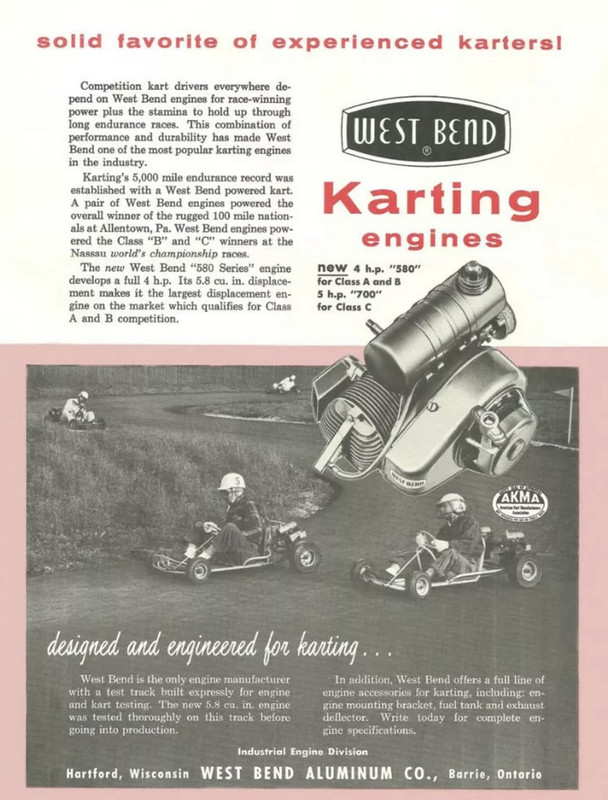 This Speedcafe snippet suggests AJ did little karting, afraid I can’t lay my hands on my copy of Botsford’s biography

When you look at the photo of Stan Jones sitting in the Cooper ,gee he aged from when say 1956 ...work stress and life style?

Did Stan race in 1960 I note in that years Gold Star  zero points? 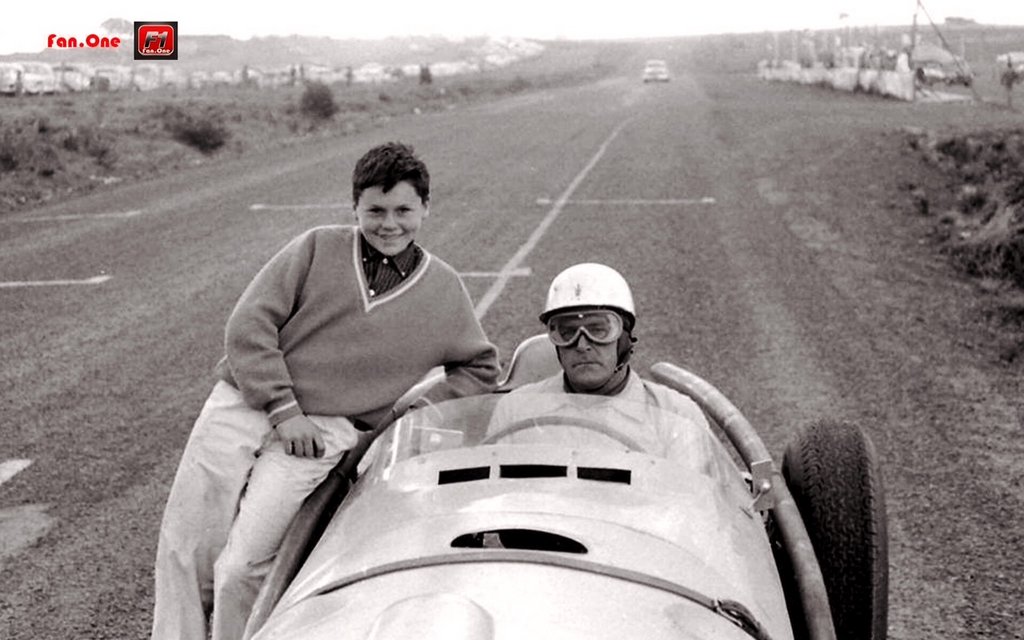 Please don't tell me he , Jones raced an Austin 7 ...it would ruin my afternoon..

And as an Austin Seven owner, it would make my day!

The following was published in the January 1965 Calder programme. It should relate to the November 1964 Calder meeting run a couple of weeks after AJ had turned 18. 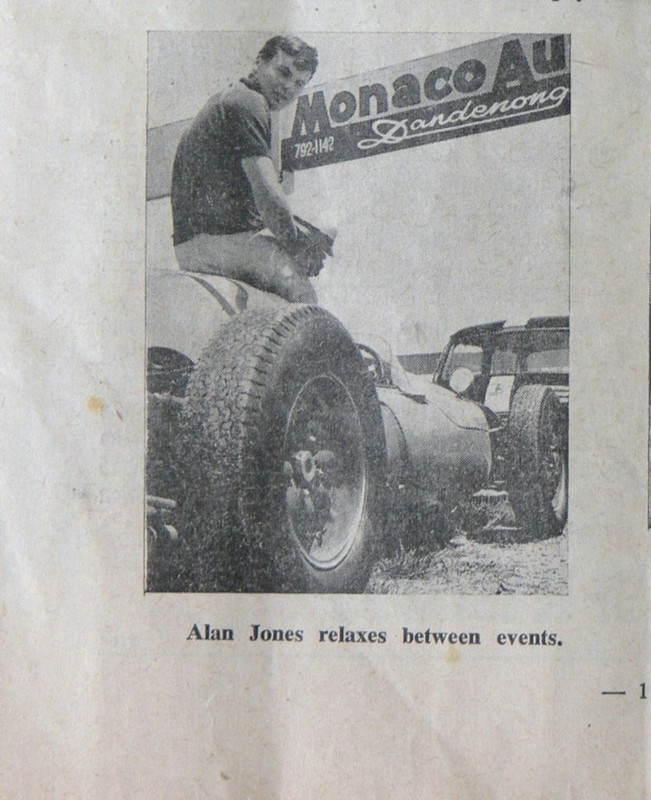 possibly from the lens of Len Shaw

And not Austin 7, but an all Simca race. In the January 1965 Calder programme, he's down for a drive in a white #29 Eiffeltower Motors Simca.

yes to the chassis number

Originally posted by cooper997
Although I'm aware that Alan gets a mention in the Spotlight page of the July 1960 AMS, the September AMS could be the first time he had his photo published in a magazine.....

I would have thought even this one wouldn't have been the first: 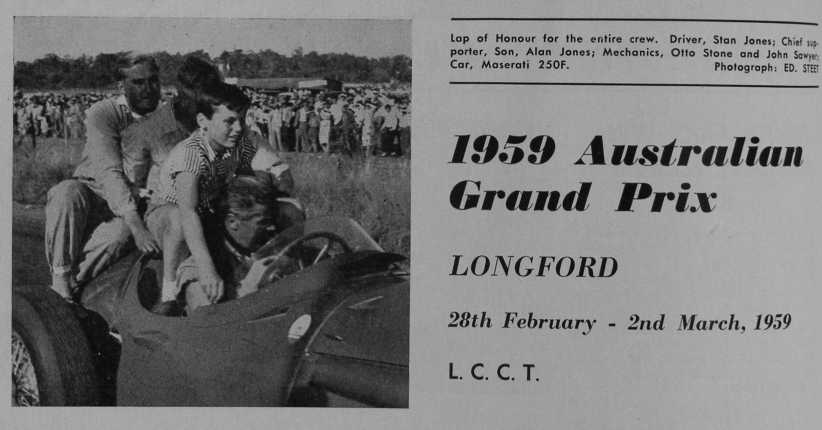 This was in the March, 1959, AMS. As I'm sure will be remembered in certain quarters.

In the theme of Mark's find, Jones and GRD related from the March 1973 Light Car Club of Australia (Sandown) Competition Communicator. 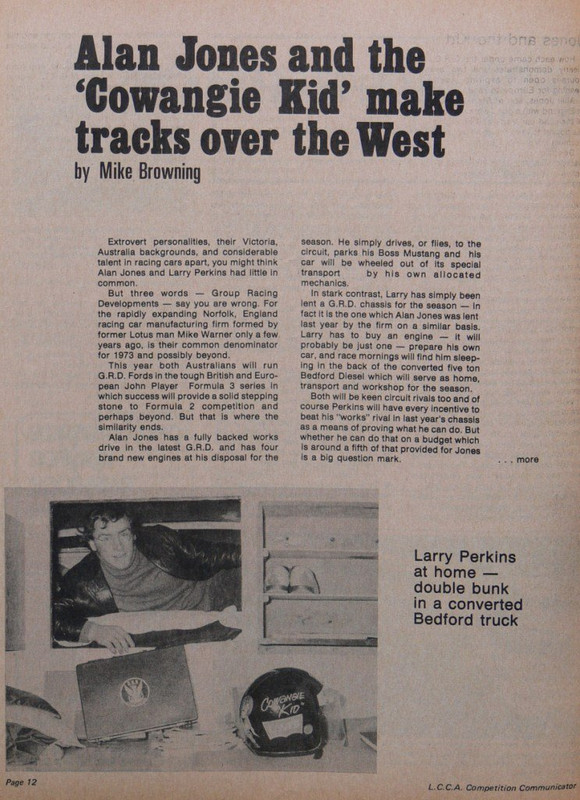 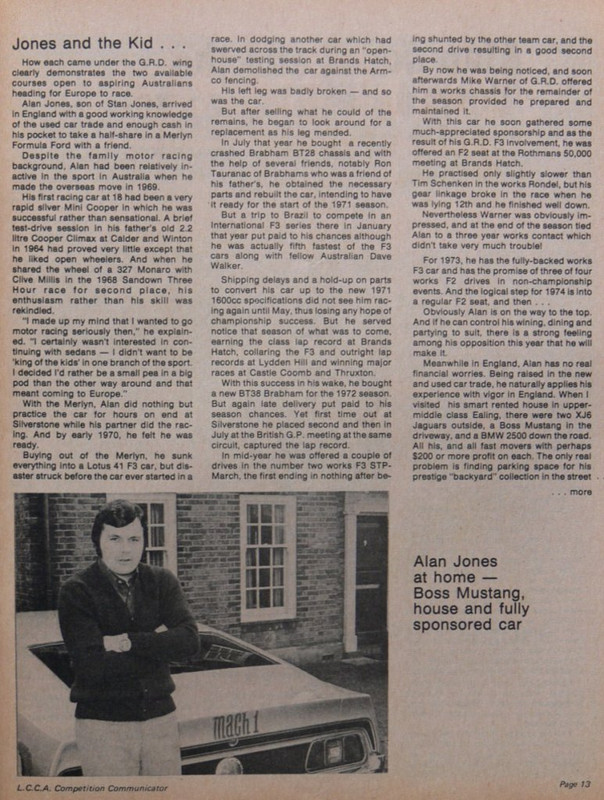 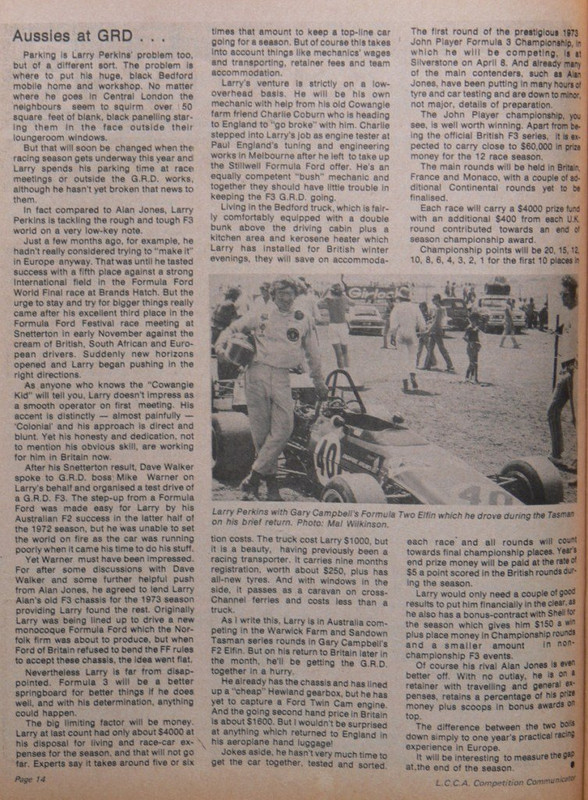 What a ripper article Stephen!

There is so much in it.

I think Mike portrays the Jones boy as a bit spoilt but we now know by then Stan’s bum was outta his britches so AJ had to cobble the deals, flog cars and vans, put up with a house full of board paying nuffies and all the rest to fund his fix

He is prophetic about Larry’s mechanical skills, someone was telling me not so long ago Jack Godbehear was the source of a lot of his ‘race engine essentials’ whilst at Paul Englands, he certainly deployed that on his Novamotor Twin-cams from 1973-1975, and the rest!
LP did get some kanga from David McKay and Singapore Airlines whilst at home but it was still a huge DIY effort wasn’t it.

Interesting that AJ and Dave Walker put in good words to give him the leg up with GRD.

He cooked up the deals to make it possible, however, with the main money contributor being - as far as I know - Gary Campbell.

You might recall that Carey Thompson was employed to manage Larry? That was on Gary's account at David's suggestion.