"Ken Wilson's Lister-Jaguar was on

the same day beaten at Castle Combe by

meeting was acting as a try out for the re-

opening of Castle Combe as a racing

"Ken Wilson's Lister-Jaguar was on

the same day beaten at Castle Combe by

meeting was acting as a try out for the re-

opening of Castle Combe as a racing

Have you a copy of the following week's Autosport? Reports of smaller events often didn't appear in Autosport until a couple of weeks after the event.

pete53: No I don't, hence the request — also Ron Fry's Ferrari records are quite widely documented on the web, but nothing about this.

Pete Stowe, of this parish, Combe historian is your man to ask, or Tim Murray with his local club history.

pete53: No I don't, hence the request — also Ron Fry's Ferrari records are quite widely documented on the web, but nothing about this.

Autosport 25 May 1962 has a report on the Castle Combe Sprint. I can scan this in later today if you wish

Autosport 25 May 1962 has a report on the Castle Combe Sprint. I can scan this in later today if you wish

Yes please — pm me for email address. I will post results here in due course. RGDS RLT

Pete Stowe, of this parish, Combe historian is your man to ask, or Tim Murray with his local club history.
I recall Ron Fry had an ordinary 250GT , FX 9 possibly, around 62/63 prior to his GTO.
Roger Lund

I thought that is what I said, or implied. I did not feel it relevant to identify it as an SWB, although I had, in fact, cross checked before posting, a photograph citing Ron in FX9 at an undated Brighton Speed Trial. It is a car I have not seen mentioned here before so that is why I raised it. I wrote FX9 as possibly so as not to appear a smarty pants.

Just trying to help as this place is supposed to be a repository for facts and research purposes.

I believe eminent historian Graham Gould’s  Grand Prix Drivers’s Club site has a useful profile of Ron Fry. That site is well worth checking just for the breadth and detail of  the period material articles.

Out of idle curiosity do we know which club organised this event ?

Out of idle curiosity do we know which club organised this event ? 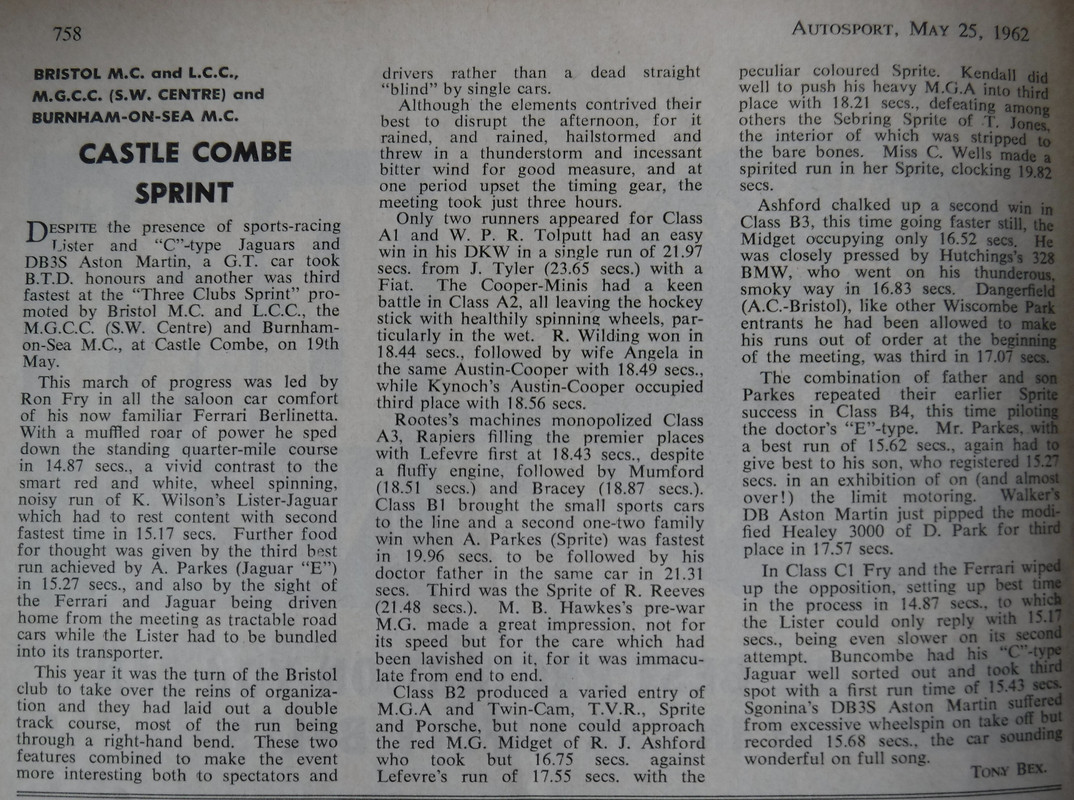 Obviously Castle Combe has faced its fair share of challenges since first opening in 1950, racing stopped in 1956 with the '55 Le Mans tragedy casting an uncomfortable spotlight on the safety of this seriously fast circuit.  Nick Syrett and the BRSCC were responsible for the rebirth of "proper" circuit racing at the Combe in '62/'63 and then a decade or so later Howard Strawford et al saved the circuit from the brink again. However - I thought the Combe still hosted sprints and motorcycle racing in the 56-62 hiatus ??

Ken Wilson & Ron Fry both fell into that notorious motor sport catch-all of "wealthy amateur". Elsewhere I have seen Wilson described as a driver with "more money than talent" but I think that is a tad unfair. He had frequent success, perhaps assisted by the fact that, like Fry, he had the means to access some serious machinery.

Ron Fry's career is well documented, particularly when he moved on from his Ferrari 250GT/275LM and acquired his GT40's (chassis 1017 and then an update to 1073). The GT40 adventure ended with a big accident at Brands.

Ken Wilson is lesser known. A builder from Bridgend in South Wales he raced on both land and water.  His Lister Jaguar Knobbly was the ex-Ecurie Nationale Belgique '58 Le Mans car whilst he also did a handful of events in his BRM P48 which, I believe, was the ex Tony Marsh car. By the late 60's he was racing a Lotus 30 (particularly at Llandow) but I can find no details of which chassis this was *****. He then moved onto a McLaren M1C (chassis 40/04) which was the ex-John Woolfe car.  Alongside this he campaigned a Gilbern 1800GT fitted with either a Chevy or Cobra V8 - legend has it that this engine shared its time between the car and his racing powerboat. The Gilbern returned to 4 pot power when the boat sank with the loss of the V8.

I remember taking the Campbell steamer from Penarth Pier (Cardiff) to Weston-Super-Mare one year to watch the Weston Speed Trials. Wilson was entered, probably in the "30". When the car succumbed to engine failure the racing numbers were swapped onto his lumbering big Yank tow car (possibly a Fairline/Galaxie?). I remember the car being very noisy but, to borrow someone else's quote, it gathered momentum rather than accelerated down the Weston seafront.

*** this is of interest to me. Even as a young school kid I realised that Wilson's Lotus 30 looked like no other. Contemporary Llandow photos show the 30 with a squared off tail section with large side intakes and a more marked Kamm - more reminiscent of McLaren bodywork than the standard curvaceous 30 item. Similarly the nose section was elongated and devoid of any headlights in the conventional position - replaced by a couple of oval driving lights in a perspex-covered section in the mid front of the nose. So which Lotus 30 was this ?  For whatever reason the histories of many of the thirty or so cars built is sketchy at best...

Out of interest, here are the results from the first proper race meeting at Castle Combe after the re-opening. 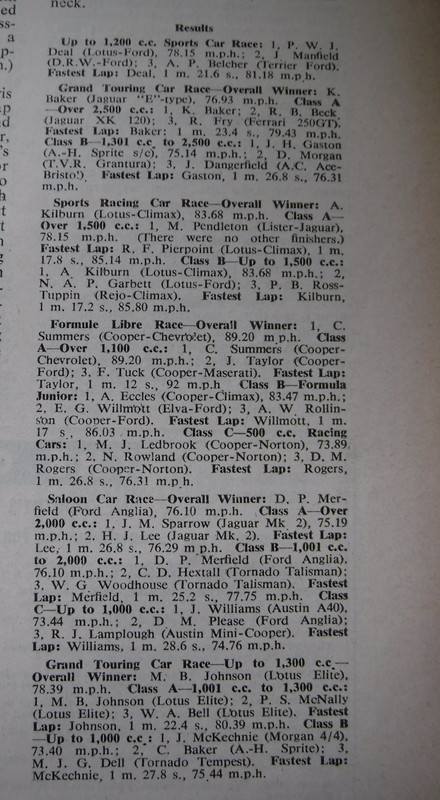