It's time for the the 23rd season of PTPC and you are all welcome to join in and beat the crap out of me for I am CLUELESS.
With 22 races expected this season, there's 2222 points to distribute. Only top ten race finish points count, not points gained from FLs or quali races or online debates.
Points scaling still applies nowadays, so if a race is cancelled or surprisingly added all entries will be adjusted in such an amazing way that you almost wish it to happen.
I still hope that entrants at least attempt to make a correct entry, to make direct comparisons easier and to reduce my workload a little.

This is what you do:
***Post a reply here with your guess on how the WDC final standings of this year will look. There are 2222 (22*101) points to be distributed. Bonus points for fastest laps are ignored.

*Points are assigned to specific drivers, not "the second Ferrari seat" or anything like that (meaning that points placed on one driver aren't transferred to his replacement in case of a driver change).

*You can edit your entry as much as you like until the deadline, which is at the start of the first free practice of the first GP of this season.

*Using a spreadsheet to get the points sum right is really helpful, your initial points allocation is likely to add up to much more due to the widespread preseason optimism syndrome.

This is how points are scored:
* If your entry doesn't add up to the points target of 2222, your entry will be scaled to make it so. After a rounding off process, scaled entries too will contain only integer values.
* If scheduled races are cancelled, all entries will be scaled down accordingly.

The competition is open for entries and changes to these until first free practice starts at the season opener.

This is my preliminary prediction, which should change before the season start:

If you think a driver will score zero points, you don't have to put him in your list.

If you think some driver will come in as a replacement during the season and score points, feel free to place points on that driver too. Again: points guesses are not transferred to replacement drivers from the one being replaced!

"The competition is open for entries and changes to these until first free practice starts at Melbourne."

Yes of course, the season opener.

Please someone explain me how do you make the code work?

Please someone explain me how do you make the code work?

Click the two <> I show in the image, a window opens, you plop your list in, adjust so aligned if needed and you are done. 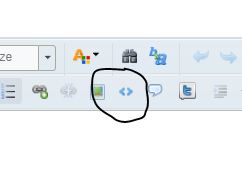 Thanks, I thought it would allign autmoatically and then weird stuff kept happening when it didn't.

Thanks, I thought it would allign autmoatically and then weird stuff kept happening when it didn't.