Yet another loss I am afraid - I understand that former late-60s/early-70s driver Peter Gaydon - of U2, Lotus 23, 47 and Elan, Martin and Chevron fame - passed away last night.

Sincere condolences to his family and friends...

Sorry to hear this, but what a life well lived.

Aside from racing cars, he was also a promoter, organiser and administrator, was former head of Aston Martin Lagonda, responsible for running the British GP between 1997 and 1999 and was the son of Hope Roderick, who raced a MG at Brooklands pre-World War Two, Peter was a management trainee for Rootes and moved up to become the Assistant Regional Manager for Rootes Motors Overseas Ltd., looking after North and South America, the Far East, India, Australia and New Zealand and Africa.

Peter sometimes played guitar in jazz bands. He was also a Royal Navy reserve and with that coupled as a son of a diplomat and the Rootes job AND racing saw more countries that most of us could ever hope to visit.

Sad - Peter was my first boss in motor racing.  After I broke up with Colin Vandervell, one of MRC’s clients, Peter offered me the job with him and Barry Bland “Now it won’t matter if you hear who’s getting more start money than any others and no conflict of interest” !  We were in a little garrett in Pall Mall, but all the best drivers and entrants of the time climbed our stairs - mostly for a gossip.  Ron Dennis was a regular and occasionally gave me a hair-raising lift home, similarly on Peter’s ‘bike.  Peter had a wonderful sense of humour

We eventually moved to an office in Gloucester Road and Peter left us after a couple of years, leaving me with Barry (and Guy Edwards with an office next door, run by Jane Partington (Constanduros).   Last time I saw Peter was at Barry’s memorial at Brooklands.   Now they’ve both gone but strong and good memories come flooding back.
Pic:  Peter at the BOAC 1000kms, Brands Hatch 1972. 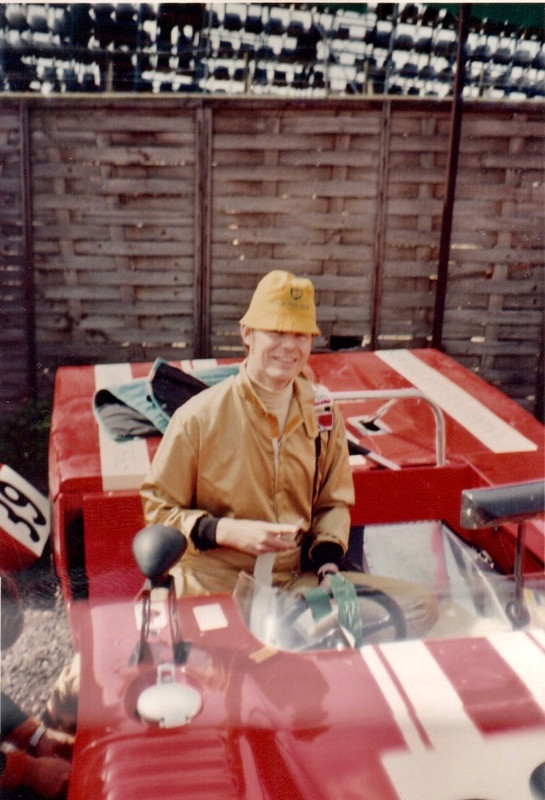 Sincere condolences to his family and friends. I just corresponded with him a couple of weeks ago as I told him about Reine Wisell's passing.

Peter helped me in 2018 and spoke to me about the Gunnar Nilsson Memorial Trophy for my Gunnar project. I'll be ever grateful for his help.

Once again, sincere condolences to all concerned.

Sorry to hear this, but what a life well lived.

Aside from racing cars, he was also a promoter, organiser and administrator, was former head of Aston Martin Lagonda, responsible for running the British GP between 1997 and 1999 and was the son of Hope Roderick, who raced a MG at Brooklands pre-World War Two, Peter was a management trainee for Rootes and moved up to become the Assistant Regional Manager for Rootes Motors Overseas Ltd., looking after North and South America, the Far East, India, Australia and New Zealand and Africa.

Peter sometimes played guitar in jazz bands. He was also a Royal Navy reserve and with that coupled as a son of a diplomat and the Rootes job AND racing saw more countries that most of us could ever hope to visit.

He told me his aunt was a motorist as well and he kept her car in a garage in the garden of his house. Didn't he attend Harrow School as well?

Interesting backgrounds people have within the industry.

Shocked to hear this. I exchanged a couple of e-mails with him just three weeks ago and he seemed on good form.

This is the BRDC obituary, just received:

It is with great sadness that we must inform Members that Peter Gaydon died on Tuesday (19th April) night peacefully at home. He had been suffering from chronic heart disease for some time.

Peter was first elected to Full Membership of the BRDC in 1970, becoming a Life Member in 1990. He first became a BRDC General Committee member in 1972; at the age of 30, he was one of the youngest Members to have ever held this responsibility. When the BRDC’s corporate structure was changed, Peter continued as a Director until 1977 when he stood down to take up the role of Managing Director at recently re-opened Donington Park. He served a further term as a BRDC Director from 1992 to 1995 before becoming the Club’s Race Director in which capacity he had overall responsibility for running the British Grand Prix from 1997 to 1999. From 1993 to 2000, he was the Director of the Silverstone Racing School before becoming Managing Director of Croft until 2006.

In addition to these various BRDC and Silverstone commitments, Peter was a member of the Council of the British Automobile Racing Club from 1969 to 1977. Whilst in his spell at Donington, he started the Donington Park Racing Club which played a major role in establishing Tom Wheatcroft’s re-born circuit in the face of resistance from the motor racing establishment. He started his career in the motor industry as a management trainee with the Rootes Group where he became an Export Executive and in the 1980s, was CEO of Aston Martin Lagonda in the USA.

However, Peter will probably be best remembered by Members and racing drivers who were active in the 1960s and ‘70s as one of the founding partners, the other being Paul Watson, of Motor Race Consultants, initially a partnership set up to meet the needs of drivers wishing to race in the multifarious events across Europe but who were too busy preparing their cars and transporting them to spend time sending in entry forms and negotiating start money. Paul and Peter were joined by Barry Bland and between them they served the needs of drivers, teams, and race organisers in the much less structured world that international motor racing was in those days.

MRC was instrumental in organising non-championship Formula 1 races at Jarama and Interlagos and Formula 2 races or race series in Argentina, Brazil, Colombia, and Israel. From 1983, MRC of course took on the responsibility for securing world-class entries each year for the Macau Grand Prix as a classic Formula 3 event.

Peter himself had raced at Macau, or at least had tried to, in 1967 long before its high-profile Formula 3 days. He was invited by a friend, Graham Owen, to drive the latter’s F2 Cooper T83 which had shown itself to be less than competitive in Europe but was good enough for pole position among the mixed bag of single seaters, sports and saloon cars which comprised the Macau GP entry at that time. Sadly, wheels kept parting company with the Cooper, one of which was returned to the Pits during practice by a Nun from a local convent into the grounds of which it had flown. Peter’s Macau Grand Prix ended on three wheels on the first lap.

Peter’s racing career began in 1964 at Silverstone in a U2-BMC Mk 2 with which he went on to win the 1-litre class of the inaugural Clubmen’s Formula championship, sponsored by the celebrated off-shore Radio Caroline in 1965 and was sufficiently encouraged to invest in a Lotus Type 23 for the following year. He also regularly raced a friend’s Hillman Imp. The up to 1150cc sports-racing category was still very competitive in 1966 despite a general drift by aspirational young drivers towards 1-litre Formula 3. Peter was a front-runner among the 1150s with the Type 23 and was able to join the F3 trend a year later with a year old Brabham BT18.

Among the massive grids which F3 attracted in the late ‘60s, Peter stood out as a young driver to watch. He took a dominant win in a non-championship race on the Silverstone Grand Prix circuit and his other results were so impressive that he was selected for one of the Grovewood Awards, equivalent to today’s Aston Martin Autosport BRDC Award. Attempts to move up to Formula 2 were generally thwarted by lack of money although an outing in Robs Lamplough’s Brabham BT15 F3 chassis with Lotus Ford Twin Cam engine at Mallory Park was rewarded with seventh place against the Cosworth FVA-powered opposition.

For the next two years, Peter stayed mainly in Formula 3 – with a Titan Mk 3 in 1968 and a Tecno TF69 in ’69, running the cars under the Special Motor Racing Team banner. Particular highlights were third places in both years in the fearsomely fast Grand Prix des Frontieres at Chimay and in the Tecno there was a second place to Francois Mazet at Zandvoort. A move up to Formula 2 on a more solid basis came in 1970 when he joined Bob Gerard Racing for several European F2 races in 1970 with a best result of seventh place at Hockenheim in one of Mr Bob’s Brabham BT30s.

For the next three years, Peter put single seater racing behind him and contested various sports car events – in 1971 with Ed Negus in a Martin M8 and in 1972 in John Gray’s Chevron B19. By then, however, MRC was in full swing and Peter concentrated on the business. He did return to the cockpit whilst in the USA in the 1980s having the opportunity to compete in various historic events in a Jaguar D-type and Aston Martin DB4GT amongst other exotica. In 1985, he won the Road and Track Manufacturers’ Cup.

Aside from his motor racing interests, Peter was a modern jazz aficionado and participated in offshore powerboat racing. He was also in the Royal Naval Reserve.

Even after his race-driving days were over, Peter remained very much part of the UK motor racing scene, contributing in a calm and reassuring manner the benefits of his experience on both sides of the fence. Living not so far from Silverstone, Peter was a regular visitor to the Clubhouse and never failed to ask pertinent questions at AGMs. To his wife Stevi, and to his family, the BRDC offers its most sincere condolences at the loss of a charming man.