35 replies to this topic

What Iam pretty sure is :

If someone has results or stats, I am very interrested

http://www.andretti.com/ could be a good starting point

Andretti.com has a pic that shows Michael in Lime Rock 1981 in a car prepared by Bertil Roos # 55 sponsored by Star Brite Car Care

MICHAEL
From Andretti.com :
1982 - FORMULA FORD Competed for Carl Haas-Won four of the six races he competed in.
1981 - Champion - FORMULA FORD Drove to his first professional championship when he earned the Northeast division title with six victories.
1980 - FORMULA FORD Qualified for SCCA amateur and national license. First competition was the Formula Ford race at Watkins Glen. Winner -

From Skipbarber.com
Michael’s brother Jeff won the Skip Barber Formula Ford Eastern Series title in 1983, and Michael himself won an SCCA Formula Ford championship in a car prepared and run by Skip Barber Racing in the early 1980s.

From Sportsillustrated.cnn.com
June 8, 1981 – Michael Andretti, the son of Indy 500 winner Mario and a college freshman, drove his Formula Ford to victory in each of his first three SCCA amateur road races this year, at West Palm Beach, Sebring, Fla. and Summitt Point, W. Va.

From Cart-racing.com
MICHAEL ANDRETTI: "Although I had an opportunity to race in Montreal in Formula One, Formula Ford and Formula Atlantic I don´t think my experience from those cars and from that long ago will offer me much of an advantage this weekend."

From CNN / Sports Ill. - 1999
Began open wheel racing in 1979 when he attended Andre Pillette's driving school in Zolder, Belgium with cousin Michael. Michael's Christmas present to John in 1980 was to Bertil Roos' driving school at Pocono where they raced SCCA Formula Ford regional and national events.

JEFF
From Andretti.com
In 1983, Jeff won both the USAC Pro Ford championship and the Skip Barber Formula ford Eastern Series title, earning Rookie of the Year honors in the latter series. Jeff qualified for his SCCA national license in 1984 and was named Rookie of the year winning six of 13 races. Jeff also won the Northeast Division title in Formula Ford and made his Super VEE debut at Las Vegas in the last event of the season.

In the 1981 Grand Prix du Canada Formula Ford Race, Michael was classified 33rd with a DNF having completed 6 of the 10 laps - He had won the pole driving a Lola T540E with the number 22.

Another one of the same car

If someone has the SCCA Yearbooks from 1980-1982, there may be pages about FFord - If so, would it be possible to post some scans ?

Can someone give me the Skip Barber Formula Ford list of champions for years 1975-1996???
I mean national & regionals series.

Thanks a lot Mark ,

If you have some other pics , do not hesitate to post some -
Do you know where Michael ended his day when he ran the SCCA RunOffs ?

Find your site recently, thanks for sharing those photos,
very good ones and good to see photos from the past of lower series like Super Vees or Atlantics.

According to On Track magazine, Michael was 8th behind:

Glad I've kept most of my old copies of On Track, kept telling my wife they would come in handy someday!

I think Michael drove the runoffs in 1982 too -
Read somewhere that he won the pole that year -
Would you also have the 1982 results ?

In 1981, Michael won Sebring, West Palm Beach, Summitt Point races
In 1982, he won Sebring and West Palm Beach with the new Lola for the Haas team
Can you tell me if all those races were SCCA sanctionned and what the dates were ?

For 1980, I can't find anything as for John Andretti's Formula Ford career

Every results you can find, would be very helpful

Blimey!! I've visited Summit Point quite a few times from the other side of the pond & never knew Michael Andretti raced there! Does anyone know of any other 'big' names that might have raced at this small, quaint but fun venue?? (and yes, I myself have completed a few laps there, albeit on a push bike after racing has finished !).

Found this :
"In my 35 years of being in the business, he's the best young talent I've seen, including Michael Andretti, who raced Formula Ford for me when he was 18." Ove Olsson says.

Originally posted by Gary C
Blimey!! I've visited Summit Point quite a few times from the other side of the pond & never knew Michael Andretti raced there! Does anyone know of any other 'big' names that might have raced at this small, quaint but fun venue?? (and yes, I myself have completed a few laps there, albeit on a push bike after racing has finished !).

Don't have a list of big names, but anyone who came out of SCCA amateur racing in the NE US would have come to Summit Point for the Wash DC National since about the time the track opened in the late 60's.

Trans Am (83-85), Can Am (II) (86) and IMSA non-prototpye cars all raced there in the 80s and early 90s. I believe the Escort Endurance series topped there too, as there are pictures of PLN and Tom Cruise wearing their drivers suits with Planters Peanuts sponsorship.

Group 44 and PTG (Tom Milner) are/were based in nearby Winchester, VA and have used the track for testing.

Brian Redman holds the "Jefferson 500" at Summit Point and has a few friends stop by.

The only driver I know of whose only SP experince is equivalant to yours is Bobby Unser. He gave a talk at the track a few years ago when he was promoting his book, and said he had just gotten a ride around the track.

I race there, but the only thing "big name" about that is the Hungarian translation ;)

Bret Hawthorne won there once in a Fred Opert Titan.

another one, Pocono 1981 encore, Mike and Dave Weitznhof : LINK

Michael Andretti started his racing career in Formula Ford.
He's shown here in a new Crossle 55 getting ready to race at Sebring .
He's receiving encouragement from Mario, cousin John and Skip Barber.
Rick Hiland and David Loring had prepared the car at Ric Racing in Bow, New Hampshire and apparently, they did a great job: Mike broke out in front of the pack and won going away 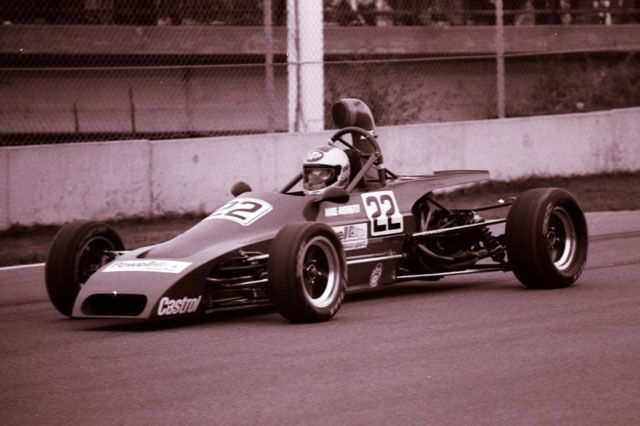 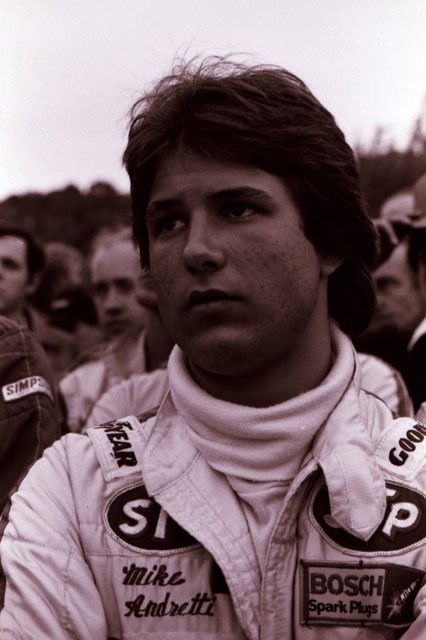 In 1984, racing the SCCA National Runoffs , Jeff Andretti qualified second and had a DNF as result competing 5 of 18 laps, he was racing a Swift DB 1.

Interesting...note the embroidery on his suit, "Mike Andretti". At some point shortly thereafter he became "Michael Andretti" and I believe that has been his preferred identity since then. All one ever hears since the early '80s is 'Michael'. Of course, the exception is Al Unser Jr, who I believe always refers to him as "Mikey".
Tom

Michael and family at Pocono Nationals, 1981.

I don't want to rain on anyone's parade, but as a child growing up at Blackhawk Farms, and Road America, Michael's early career looked to me like a disaster. I know one June Sprints he wrote off at least 2 cars that weekend alone. My favorite memory was watching him enter pit lane in a Lola 644, and running over his own boxy nose. A friend almost ran him over at turn 13 at Road America after he wrecked under the bridge, and stood in the middle of the course surveying the wreckage!

Seems it is pretty easy to learn the limits, when there is unlimited $ behind you replacing cars all the time

Sorry for the negativity.....

Thanks for the photo, MyF5000, would you have Mike's results for this Pocono race ?

In this Gordon Kirby's column , there's a mention of Mike's days in Formula Ford, I learned Dave Loring was his crew chief sometimes in 1981.

Excerpt from the column :
While Andretti ran a year of SCCA FF1600 in 1981 in four different cars. In fact, Loring was crew chief for young Andretti for a few races in 1981 when Andretti drove a Crossle Formula Ford for Skip Barber and I remember some years later Michael talking about how tough it is to make it in racing. "Look at a guy like David Loring," Michael remarked. "He's a classic example of a great racer who never made it."

I know Sebring very well and the above posted photo does not look like Sebring at all. It looks more like MOROSO in West Palm Beach.

This picture of Jeff's Swift DB-1 that appears on post # 17 should be a winner.
According to this Mohawk-Hudson SCCA Region report (page 9 of 12), in early 1984 "region member Jeff Andretti starts the year strong, winning two Formula Ford National races (and a pro event too) in Florida."

Thanks Ury914, I remembered having seen this picture and another one on Skip Barber's site (in 2004 I think) in an article saying that Michael Andretti would be coaching in a Barber Dodge Regional race in Moroso.
And that article had legends of the pictures speaking of Moroso. This Skip Barber site article isn't on line anymore and that's a pity because I have no copy of the second picture.
This one now appears on this site page : Link .

This Sports Illustrated article I spoke of in post # 4 says Michael won both Moroso and Sebring.

At that time, I posted (post #5) some links to the 2 pictures and article mentionned above and two links pointing to pictures of the old andretti.com site. You won't find any of them on the web anymore and I haven't save any of them (argggggggghhhhh)

Originally posted by kris
......Michael talking about how tough it is to make it in racing. "Look at a guy like David Loring," Michael remarked. "He's a classic example of a great racer who never made it."

Ah, David Loring! Talk about a marvelous talent never getting the necessary breaks to make it big, as he surely could have.
Tom

Originally posted by kris
Thanks for the photo, MyF5000, would you have Mike's results for this Pocono race ?

kris, photos from June 13, 1981. There where no results from this FF race, it was canceled due to fog. 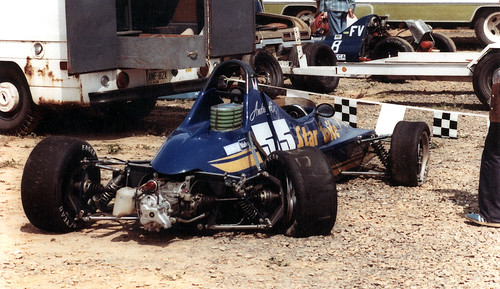 Michael Andretti's Lola T-640 Formula Ford. Note: He was listed as Mike Andretti on the grid.