29 replies to this topic

Does anyone happen to know the present whereabouts of the two Lola T260 CanAm cars as used by Jackie Stewart in 1971?

The subject of various CanAm cars' current homes featured in a post-Goodwood dinner conversation last week.
A friend said he thought he'd seen a T260 in the 'Rosso-Bianco" collection (or a reference to it, at least). That would have been four or so years ago though, I think.
That's far from a definitive answer, though, I'm afraid.

Was one of them offered by Brooks in December 1997?
I thought the other was mit Peter Kaus, but that information might be out of date

John Greenwood (Greenwood Corvette feller) owned one of them.

One was in the Rosso Bianco last year. See this.

Who stole the nose?

I think I saw one at Road America when Stewart drove for Carl Haas. Ill watch to see if one shows up at RA Vintage races.

The Peter Kaus one shown in the 'Rosso Bianco' collection at Aschaffenberg has been there for years. I first visited the museum in around '87 I guess as I worked in Germany at the time and visited often. It was there at this time.
Wonderful cars there, the only 'minus' point being they needed more cleaners! Some of the cars were under mountains of dust although this may have been addressed since of course as I have not been back for about 12 years. I have some photos I'll try to get around to scanning.

Doug. John Foulston had one of these cars,I assume that was the one that was auctioned.

I understand JYS wasn't exactly thrilled with the handling of the T260. It was fast but apparently it handled like a pig.

As far as the "cow-catcher" front wing (that's lacking in the photo), it was only installed later in the season to provide some much-needed front end grip. It's understandable that it might be displayed without it. (It was kind of hideous looking)

I have found a few photos I took at the 'Rosso Bianco' collection in Achaffenberg.
All taken in 1990.

Originally posted by biercemountain
I understand JYS wasn't exactly thrilled with the handling of the T260. It was fast but apparently it handled like a pig.

I believe "Pregnat Elephant" was his exact description.

Originally posted by Ted Walker
Doug. John Foulston had one of these cars,I assume that was the one that was auctioned.

I remember Foulston with a white & red L&M colour 260, with the cow catcher (not sure if he drove it or got someone else to do so).
I thought it was auctioned along with (some of) his other cars.

I think Rosso Bianco/Peter Kaus had his 260 before the auction (+ by the time of the Foulston auction (late 1997?) I thought he was trying to avoid buying more cars), but it could well be the same one.

Thanks fellers - just one of those things to do in haste which I couldn't fit in without a little assistance. The Kaus and Foulston T260s are different cars, 'we' at Brooks/Bonhams sold the Foulston car some years ago for Mrs Mary Foulston but I have simply lost track of it since - trying to spin too many plates simultaneously...


I remember Foulston with a white & red L&M colour 260, with the cow catcher (not sure if he drove it or got someone else to do so).
I thought it was auctioned along with (some of) his other cars.

I think Rosso Bianco/Peter Kaus had his 260 before the auction (+ by the time of the Foulston auction (late 1997?) I thought he was trying to avoid buying more cars), but it could well be the same one.

This has jogged my memory. I did a search of my F1 notes and found that Foulston bought an "ex-Stewart L&M Lola T260 Can-Am car" from Don Walker in February 1985.

I think Mike Wilds demonstrated the car at Brands Hatch at an historic meeting where some of Foulstons car ran during the lunch break as a tribute to him.

Also I have a very vague recollection of Mike Wilds running in a "Supersports" type race at Brands Hatch in the same car, though I think he retired at the first corner.

Couple of views at Riverside in the top row in T H I S ALBUM of Curt Anderson's photos.

Not sure where these were taken. Copyright Bill Oursler but used with permisssion:

Road Atlanta was the location for the photos Allen posted.

Schkee beat me to it, but I was going to point out Road Atlanta being the track in the photos Allen posted. Allen, as in the case of the F5000 photo you posted, note the red earth in the bluff, a sure sign of Road Atlanta.

As far as Lola T260s, I recall that Bob Nagel ran one in the '73 Can-Am series. Heyser's car a year later, or the other one?

I remember standing alongside both the Heyser Roman Brio sponsored mount and Nagel's blue Lola in the paddock at Riverside International. Should have a picture or two I took...around here...somwhere...

Good page here that explains it all: http://www.geocities...60-Palmares.htm

Originally posted by Allen Brown
Good page here that explains it all: http://www.geocities...60-Palmares.htm

Thanks Allen, I hadn't had time to search.

John Gunn, I should have remembered his T260...as I only stood alongside it, inches away as it rolled past heading out of the paddock and onto the pit road at Riverside

(for forgetting). I thought there was another T260 at Riverside.

I probably took a photo of it as well as the Nagel car and possibly Heyser's as well.

Pete Lyon, while discussing Reine Wisell's entry in the 1972 Watkins Glen Can-Am, states that only one of the two T-260s was ever actually raced in 1971 by Stewart:

Reine Wisell stood in for Tom Heyser, a schoolteacher who owned 1971's unraced, spare T-260 (known as the "White House Car" for its only public appearance that year) but who had sprained his wrist.

(I have a vague recollection of a picture of a few drivers meeting Nixon at the White House and the T-260 is in the picture.)

A little bird has just whispered in my ear that the Foulston T260 was bought at the auction by Mike McComas on behalf of someone in Texas. The little bird reports that it is still in Texas.

Is that what you needed Doug? Or do you need a name?

can anybody help me to get detailed photos from this Lola T260? 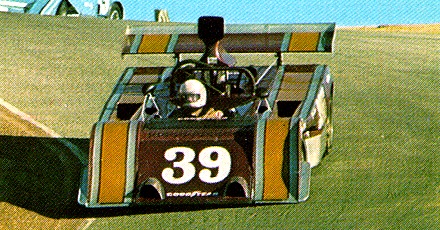 This photos would be very helpful for me to build this car in scale 1/12th.

If anybody want to see my CanAm models, so please click here:
http://www.canamcar-models.de/