Being introduced this weekend in Monterey is the Chaparral 2E continuation series, which is this:

The 2E Continuation of Series [I]


A "continuation of series" model is a historic sports or racing car that is built using the original plans, etc. as the original. It is not a kit car. It is not a car that the designer would have built if he had been able to have access to modern materials and developments. It is purely and simply the next chassis in the series and as identical as it can realistically be made to the one that came before it, even though forty years or more might have passed.


It is important to aim for authenticity for a number of reasons. These include:

Owners may wish to race the continuation of series car and eligibility requirements will need apples to be compared with apples
The continuation of series machine is a way for the man or woman in the street to drive and experience an historic artifact without needing access to a highly valuable piece of history that is guarded carefully by its trustees.
Modern drivers being able to enjoy the driving experience previously restricted to the designer or professional race drivers can evaluate just how wonderful and innovative the original was as well as appreciate the achievements of the original drivers in races.
It's just plain honest.

Given the prodigious output of Jim Hall's workshop in the 60s and 70s why was the 2E model chosen to continue the series. Well future plans may well see other models of Chaparral produced but the 2E while not statistically the most successful model in racing was a favourite of Hall and a number of drivers. The fact that the original body moulds were still available to Jim Musser was also a contributing factor!


The 2E is not a reproduction, a fake or a kit. It is quite simply another Chaparral built by the same team and using parts, body panels and technology available in 1966. Deep amongst all the nuts and bolts and piping it contains something else that the previous 2Es in the series possessed: flair, urgency, drama, a desire to go very fast. Plus ca change plus c'est la meme chose.

I lieu of a plastic one with a roof... I want one!

Beginning of the 2 series:

The 2 is still with us in Midland, TX.

Here she was in a hotel parking lot in 1964 in the deep South at a place Jim Hall called "the space age successor to tobacco road": 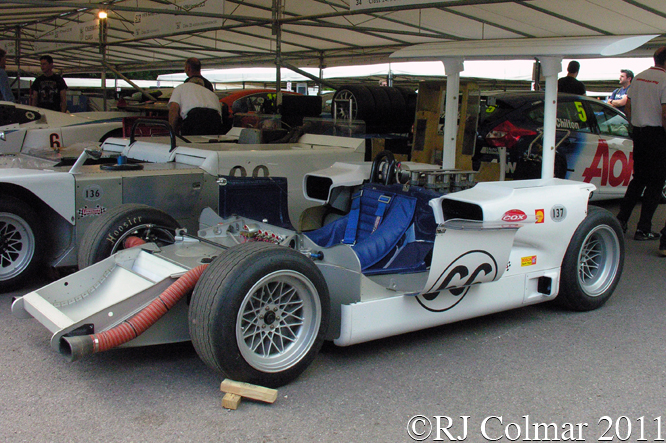 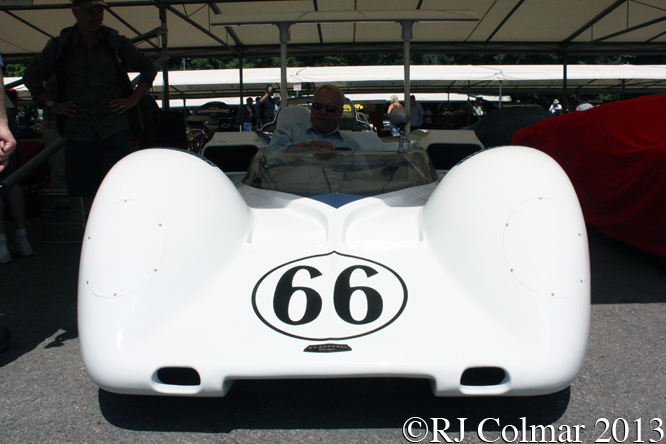 Relevant answers maybe credited and used in a forthcoming blog.

It was a long time ago, but I was mildly surprised to see how neatly finished the 2013 Goodwood car was, I recall that although very nicely put together, the originals were slightly more 'workmanlike'.

It was a long time ago, but I was mildly surprised to see how neatly finished the 2013 Goodwood car was, I recall that although very nicely put together, the originals were slightly more 'workmanlike'.

I didn't get to see the 2E close up at this year's FoS, but I assumed it was portrayed as being the 'original' one from the museum - as was the car that has appeared at Goodwood before - but Rob's comment makes me wonder.

However, if my understanding of the 'original' car's provenance is correct, it is itself something of a re-creation. This is purely from memory, but I believe it is often described as being nominally "2E-001" but in period that car was developed into 2G - which was badly damaged in Hall's famous accident in the 'Stardust Grand Prix' - and some of the remains used in the rebuild as a 2E. (I don't have the pictures I took at previous FoS to hand which showed interiors and chassis plates and I can't remember if the car itself claims the identity of either 2E by way of a plate).
I've not been able to determine if this used a spare (or new) chassis or was extensively repaired and reverted to 2E or if it used parts of the other 2E which was damaged in the Bahamas. There's never been a suggestion of that second 2E being rebuilt, or even still extant as a complete car however damaged, so one assumes its chassis was at least as bent as 2E-001/2G.

I've yet to see an example of the 'continuation' 2E (unless this year's FoS gave me a fleeting glimpse of one?), but I'd imagine they are a little neater and more highly finished, with little or no evidence of a car that has raced and been developed and tweaked through its life, but I think the intention was that they'd be faithful to the original design.

So… not sure that's actually much help...

So… not sure that's actually much help...

Where there is doubt there is a question

Where there is doubt there is a question

I thought you always heard voices. Is this something new?

I read different thing from different sources about the 2E continuation series. Everyting is a subject of IIRC!

On the Chaparral website(?) it said that they had to custom make some small parts they bought back in the day but were unavailable since years.
Everything else is done exactly like it was in '66.

There were two new 2Es build. One has turn indicators on the corners of the inside of the air intake for the front wing. There are some pictures of that car on the web.

From Chaparral by Falconer with Nye:

After Hap Sharp crashed the purpose build 2E002 car at Nassau, only the 2E001 chassis - which had been 2C001 - was left in serviceable condition...

I got some books on Chaparral and the Can-Am but I can't find a picture of the car after it was crashed nor what damage it had.

I looked at the car at the 2013 FoS. It looks very, very similar to pictures of the original.

One thing that is different I think, is the cross member over the transmission behind the engine. This seems much taller and bigger than anything in the period pics.

One more thing, a gentleman looking at the 2013 car mentioned that one of the two " continuation" cars was in very bad accident - I have no idea how true that is.

Thanks to Kayemod, Tony 2F-001 Pashley, Supersox and Allen Brown Duc-man and mariner for your help with Saturdays post

Relevant answers maybe credited and used in a forthcoming blog.

Not something I verified visually, but according to the relevant progs :-

Not something I visually verified, but according to the progs :-

Not something I visually verified, but according to the progs :-

Thank you, Ralph.  I had seen a photo of the 2E in action with what have must have been Jim Jnr with a full face helmet - couldn't reckon Jim Snr would wear one!!

2E continuation serie : one thing  is they used maybe on this car spares from others chassis. The dashboard shape and gauges positions are rather inspired by the 2C .

in any case, that' s ain't the original 2Es dashboard, with its  two gauges each side of the big RPM tacho.

don't generally like crash photos, but I have a couple of pictures of sharp's 2-E after the crash at nassau in 1966, lot of damage to the right rear corner. but probably repairable. as for hall's crash at stardust raceway in 1968, the damage is quite comprehensive, I seem to remember in one of the chaparral books a team member saying there were only a few bits that were re-used. hall was lucky to survive this one. I have a couple of shots of the aftermath of that one which I got posted on the auto diva site out of france in the can-am thread, on page 47. these were photos from autoweek & another magazine called auto racing. the chaparral team tore up a lot of cars in nassau, as did many other racers. am not good at links and adding photos to messages, I could send them to someone to post. do always worry about the legals. don't mean to divert this thread.

The 2E at Goodwood in 2011 and driven by Jim Hall Jr in 2013 is the second continuation car built by Ed Scutchfield . All previous appearances were the museum car that was a new tub built during the early 90s using some components of the original 2Es . Back in 2009 i was at the museum and the Chaparral maintenance tech told me that Jim Musser was badly hurt in the first continuation car . He said that Musser was was bleeding the torque converter and the car lurched forward underneath something . Of the original 2Es if you look at the car driven and crashed by Hap Sharp at Nassau in 1966 ; it has rounded rocker panels . This car was actually 2E001 and also was 2C001 that was crashed the previous year at Nassau by Jim Hall . Phil Hills 2E002 had sustained damage at the last Can-Am race at Las Vegas and probably wouldn't have been ready for Nassau. Also photos of Phil Hills 2E002 with the squared off rocker panels show a small repair strip at the top of the left rear rocker. That strip is also visable on all the pictures of the 2G meaning that 2E002 actually became the 2G .