I’ve just re-discovered some photos that I took in the early fifties of Australian racing cars at various circuits and hill climbs.

As they aren’t doing much good sitting in a dusty photo album I though it might be a good idea to start another Thread where personal and previously unpublished photos of early Australian racing cars, engines, drivers and circuits could be displayed for TNF’s to view.

All of us probably have some personal and unpublished photos that we could share and which in all likelihood may well disappear forever once we “fall off the perch”.

By putting them up in the Forum they may just help someone who is restoring a particular car or looking for historical detail or even just stir some memories?

I would tentatively suggest that we might start with photos from the ’50 – ‘70s?

Lago-Talbot engine (or is it more correctly Talbot-Lago engine?)

My apologies regarding the quality as they we taken with a small "Box Brownie" type of camera!

I can't let this fall of page one without a reply, great photos kaydee!
I love the engine shot of the Maybach, look at the slant engine with fuel injection and look at those beautiful front brakes! It was very modern for the time.
I don't know why they called it a Maybach and didn't call it a Repco.

They probably spent so much time on the bottom end, fuel injection and exhausts that they couldn't afford any more to cast up a rocker cover with their own name on it...

Yes the Maybach was the closest that we had to a "works" car in those days and was certainly lucky to have Charlie Dean and the resources of Repco behind it.

Ray, I take it that the Leyburn photo is the the Mk l version?

Bathurst, 1969 ( think). One of a box of Bathurst slides from that meeting given to me by former RCN correspondent Peter Longley.

Certainly looks like it could be Bathurst - not sure about the year but by the look of the Ford '69 would be around the mark.

The Leyburn pic is of this car: 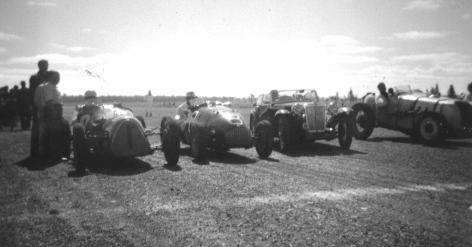 (as Ray carefully sneaks another pic of the Regal onto the forum...)

Really...Where's Spencer? I can see Leo talking to Jim Russel from Newcastle...

More photos from the 1955 Australian Grand Prix at Port Wakefield -

Originally posted by seldo
Really...Where's Spencer? I can see Leo talking to Jim Russel from Newcastle...

Afraid I don't know any Jim Russells from Newcastle...

Count mine as a vote against

Colour pic is definitely 1969, the only year the GTHOs wore 12-slot wheels, and there is the HDT GTS350 in the background.


Afraid I don't know any Jim Russells from Newcastle...

I knew the surname was wrong...It is Jim and he did some racing in Europe and when he came back here he was a motor-race journo...
AHA...It just came to me (old age and senility) Jim Sullivan!

Could be, I guess, but the build and the way he's standing, particularly with his hands just hanging down like that, look very Spencer to me...

By the way, I wonder if that's the Nomex suit David finished up in?

I would go for Spencer, as I think he would be the most likely to be chatting to Leo. He was without a drive after a crash and burn with a Monaro at Sandown which would explain the street clothes.

Actually, he got hurt in that crash at Sandown...

But he is with David, I would say.

Maybe...I just don't recall Spencer being as grey on the sides at that stage...and his hair was a bit...slicker I guess will do..

Originally posted by Terry Walker
Bathurst, 1969 ( think). One of a box of Bathurst slides from that meeting given to me by former RCN correspondent Peter Longley.

I was looking at some of the people in the bckground and maybe I'm imagining it, but is that Fred Gigson and one of the scrutineers over Leo's left shoulder, and it could almost be me and Col Wear chatting to a balding guy with sunnies at top left above C pillar of the Falcon. Probably imaginitis...

Don't think that's Fred... and were you likely to be with Col at that time?

The other guys? Best I can manage:

Yes I agree that Fred is a bit doubtful, but Terry's close-up looks even more like me and Col. Yes Ray, I did know Col then through Ron Kearns

You didn't run that meeting, David, and Ron Kearns ran in a Fiat...

Would Col have been there helping out with the Fiat?

Originally posted by Ray Bell
You didn't run that meeting, David, and Ron Kearns ran in a Fiat...

Would Col have been there helping out with the Fiat?

Yes - Col prepared the Fiat as far as I recall. And Ron I think introduced me to Col at that meeting...I dunno - they have all morphed into one now...OA&S doesn't help either...

Nice to see the Alta Holden in an early guise. It's been restored to original with an Alta engine and is racing in UK historics. It was the only one with the unique mag wheels. Here it is in WA some years after Port Wakefield, driven by David Drew, the last to race it as a "front line" racer.

And here's another pits scene from Bathurst 69:

Yes...and Des West to the left. I remember the guy in the overalls but can't put a name to him yet.

These guys have aged somewhat since this photo session, I can tell you!

You are most welcome to post that shot of Jack Brabham on his Australian website
www.jack-brabham-engines.com
We are happy to use your name or any other recollections you have of that particular time.

Wonderful how joe public could get so close to the cars and crew in those days.

That's the second time in a few days I have been looking at photos of that Cooper Bristol. I've just been given a handful of dusty amateur slides from the 50s, and this one (badly faded) not only shows the Lukey C-B but also the Cusso sedan at the 1957 AGP meeting at Caversham.

Terry... what on earth is that car over in the corner, behind the balding Len?

A90 Atlantic I think. One for the TNF BMC Owners Club...

Originally posted by Ray Bell
Terry... what on earth is that car over in the corner, behind the balding Len?

Do you mean the box trailer or the A90

The ex-works ferrari 500 that Ascari drove to a world championship, which then raced by Lex Davison and finally by Doug Green in Western Australia. Still astoundingly original, although the original 2-litre 4 had been replaced by a 2.5 litre, and finally a 3-litre Ferrari 4, Making it a Ferrari 500/600/750. Now restored, and in Donington, but when this pic was taken at Caversham it was still a main stream single seater.

It didn't come with a workshop manual, so ace mechanic Don Reimann had to have an offsider solely to take notes whenever he had to dismantle anything.

Approx which year was the photo, Terry?

As it's the middle of the night in Australia, I'll but in...
1960
possibly the December Caversham meeting

As ever, many thanks, David..
RL

In David McKinney's excellent 250F book there is a photo of Stan Jones at the 1956 Olympic Grand Prix, December 1956, with Stan Jones in #2.

Could someone please clarify.. are the Austrlalian GP and the Olympic GP one and the same?
If so, who drove #2 and who drove #8?

The term 'Olympic Grand Prix' refers to the Australian Grand Prix of 1956... which was staged in Melbourne even though it was Western Australia's turn to host the race... because it was run during the time of the Olympic Games in Melbourne...

Thanks Ray.. maybe David will respond about the Stan Jones #2 photo in his book.
Rob

Probably a Moomba meeting from a later year...

Or maybe David has another explanation?

I think Ray's probably right
The pictures and captioning for that book were a nightmare (for reasons beyond my control). That one came with others that were from the Olympic meeting, and I can only think that in the rush I didn't check
Sorry, Rob

Originally posted by Ray Bell
The term 'Olympic Grand Prix' refers to the Australian Grand Prix of 1956... which was staged in Melbourne even though it was Western Australia's turn to host the race... because it was run during the time of the Olympic Games in Melbourne...

I must get all the old photos from that meeting out and lodge them.Has anyone ever seen the magazine/book that was printed showing all the race results and standings/lap times lap by lap.Few years ago I gave my copy to the Hunts along with a Lago badge.

Back in the 1950s the late Dave Van Dal, as well as being a Morgan expert, a racing driver, and an advocate of the tubular space frame, was also a keen amateur photographer. In 1958 he trekked across the Nullarbor from his home town of Perth, attended the 1958 AGP at Bathurst, and took a number of slides.

This is an example, a Cooper F2, back when they were workaday racers. I'm puzzled by the odd paint effect on the front.

The result, perhaps, of a bit of a biff early in practice?

Or maybe an accident in the trailer on the way to the meeting?

Looks to me as if the paint's been scraped off
If, as it appears, it's Alec Mildren, he went off on oil in his preliminary heat and was hit by a Ferrari - hard enough to put both cars out

Mildren had spun, so the front of the car was damaged. The AGP book refers to Mildren's car being left 'well bent'... and to it being repaired and starting from the rear of the grid. Mildren's number in the race was indeed 10.

Obviously this car had a body from the days when Cooper made their bodywork in aluminium rather than fibreglass.